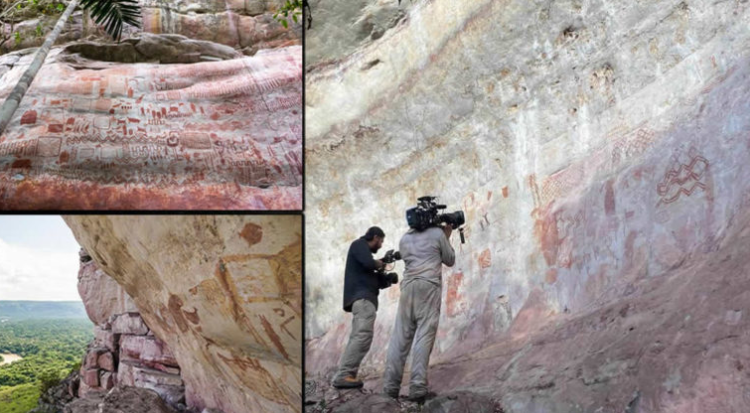 Thousands of prehistoric paintings discovered in the Amazon rainforest, here is “The Sistine Chapel” from 12,500 years ago.

A team of archaeologists discovered “The Sistine Chapel of the ancients “A wall” almost 13 kilometers long containing rock art created 12,500 years ago.

Researchers from the United Kingdom and Colombia have found the rock paintings on the rocks of the Serranía de Chiribiquete National Natural Park, located in the Colombian Amazon region. I’m depictions of extinct animals dating back to the ice age such as the mastodon, created by a unknown Amazonian tribe dating back 12,500 years.

The paintings depict extinct ice-age animals such as the mastodon, a prehistoric relative of the elephant that has not been seen in South America for at least 12,000 years. There are also pictures of the paleolama, an extinct member of the camel family, as well as giant sloths, ice age horses, and human handprints.

Many of the paintings include fish, turtles, lizards and birds, as well as people dancing and holding hands, among other scenes, a figure wearing a mask that resembles a bird with a beak. An interesting aspect is that many animals are surrounded by little humans with le arms outstretched to the sky, as if they were worshiping them.

Archaeologists have indicated that the scale of the paintings is so large that it will take generations to study them all.

What has puzzled the researchers is the fact that the paintings come in a wide variety of sizes. There are numerous handprints and many of the images appear to represent geometric shapes.

Ella Al-Shamahi, a paleoanthropologist and TV host who was on site said she was surprised:

Many of the paintings are really huge – How they climbed those walls?

Some of the paintings they are so high that they can only be observed with drones.

The imposing historical work of art, which was precisely baptized the “Sistine Chapel of the Ancients” was discovered last year; However, it has been kept under wraps until now, as a television series was shot for UK Channel 4 which will be screened in December: Jungle Mystery.

At the moment, archaeologists do not know which tribe may have created this impressive work of art, it may have been an ancient lost civilization, it should also be remembered that this is home to two main indigenous tribes believed to have existed for thousands of years, the Yanomami and the Kayapó.

About 75,000 drawings have been found so far, representing between 5% and 8% of all paintings. According to BBC, researchers try to protect not only the archaeological treasure of the place, but also its ecological factor, and are opposed to opening this place to tourism, trying to avoid vandalism in the area.

In this article:Amazon rainforest, prehistoric paintings