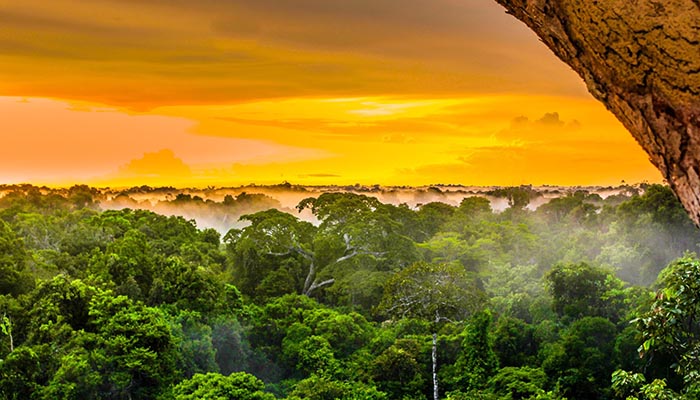 In the primeval forests of America there is a huge hill called Montegrande. There are many such hills around, for centuries the peasants did not pay attention to them built houses on top and eventually crowded them with their settlements. But while digging up the land, they stumbled upon fragments of dishes, jewelry and stone bas-reliefs.

The finds interested scientists, in 2010 archaeologists arrived here and the excavations gave a stunning result. Montegrande was not a hill. Under the earth, there was a huge stone pyramid of an unknown civilization 3,000 years old.

This is one of the most important discoveries in American history of the 21st century, and here’s why. The fact is that in the history of the Ancient World it was always believed that the Amazon River Delta crossing South America and covered with impenetrable jungle was uninhabited.

The first people created American civilizations on the sidelines, but were afraid to enter this fierce darkness full of predators, stinging insects and murderous reptiles. Only primitive tribes of hunters and gatherers roamed in the Amazonian tropical jungle.

They moved from place to place, built temporary settlements and abandoned them after the depletion of game and plants. Nomads did not evolve into civilization and cities, because they could not develop technologies, clear a place for fields and cities.

This was the case until 2010. And even the records of the Spanish conquistadors were considered a myth by scientists. The conquerors of the New World who arrived from Spain wrote about huge cities in forests covered with gold, about hundreds of ships scurrying between cities along the Amazon River with goods and people.

But not a single archaeological expedition found evidence of this, even a small house.

In 2010, Peruvian scientists found Montegrande and for 12 years of excavations, the world of a previously unknown civilization of the Earth began to slowly open up.

The mysterious forest people built the first pyramid in 1000 BC and rebuilt it 8 times over a thousand years of existence. Around the pyramid were residential quarters and buildings of power, the city was protected by a 2-meter stone wall from wild tribes.

At the top of the hill there was a place of worship for the gods and huge fires, a path was laid there through a labyrinth in the form of a spiral. Scientists have found many remains of drug-containing plants, it is believed that they created hallucinations in the form of spirals among the priests, they were considered a manifestation of the gods in Montegrande.

Spirals for this civilization have become something like our Christian cross or Islamic crescent. The remains of snails (they are also in the form of a spiral) are scattered throughout the city, and the dead were covered with them from head to toe.

2 kilometers from the main city, scientists found a small pyramid, which was the place of true maternal love. Desperate mothers brought their dying children here, and the priests sacrificed both of them to the gods. It is possible that a loving mother could go to heaven with her child.

Research is ongoing. Unfortunately, the Amazon civilization had no written language and no records left. We do not know their stories, names, we cannot read their thoughts about love, life and death. The people of Montegrande cannot tell how they came to the Amazon and why they disappeared.

All we have left is ruins and bones and our version of an incredible portrait of people who were swallowed up by the jungle 2,000 years ago.

In this article:Amazon, Peru