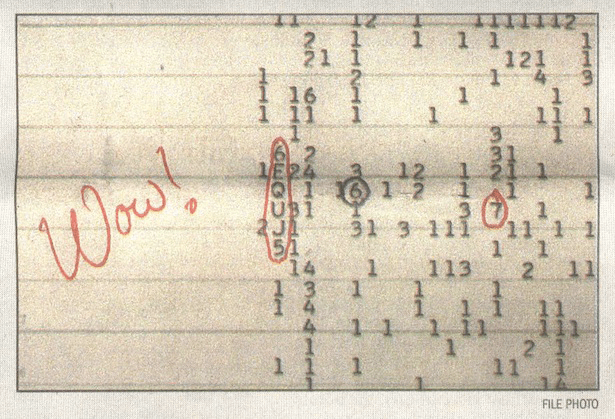 Did humanity’s first contact with aliens take place in 1977? Probably not, but we will never know for sure.

Few anomalies in astronomy remain as mysterious as the “Wow!” Signal from 1977.

On August 15, 1977, the Big Ear Radio Telescope in Delaware, Ohio, received the most powerful signal it would ever detect during its decades of observations. The signal lasted just 72 seconds, but when an astronomer spotted it on a computer printout days later, he was so impressed that he quickly scrawled “Wow!” in red pen across the page. The data looked much like what SETI astronomers expected to see from an alien intelligence. However, despite many attempts to follow up on the find, the so-called “Wow! Signal” has never reappeared.

Few moments in the search for extraterrestrial intelligence (SETI) have captivated the public’s imagination quite like the Wow! Signal. To some, it’s the most promising potential detection of alien life ever. But others see it as a triumph of publicity over science.

“Was it ET or was it not ET? Nobody knows ”, Seth Shostak, senior astronomer at the SETI Institute, tells Astronomy.

No one has ever found another explanation for what it could have been. It is as if you hear chains rattling in your attic and think ‘My god ghosts are real’. But you never hear them again, so what do you think?

Most importantly, Shostak says that if the signal wouldn’t have had Wow! written across it, no one would’ve ever heard of it. One-off signals like this were common back in the early days of SETI, when observatory computers were too primitive to notify astronomers of discoveries in real time, or perform rapid-fire follow-ups.

But that hasn’t stopped astronomers from repeatedly returning to this patch of sky searching for the return of the Wow! Signal.

Late in the summer of 1977, Jerry Ehman sat down to review the latest batch of computer printouts detailing data collected by the Big Ear Radio Observatory, where he was volunteering as an astronomer. The observatory was controlled remotely, and it could collect several days worth of data before the computer ran out of storage space. At that point, a technician would show up, reset things, and start the next observing run focusing on a new patch of sky.

The Big Ear Radio Observatory was well known among astronomers in its day. The telescope was designed by pioneering Ohio State University radio astronomer John Kraus. And it was largely built by university staff, volunteers, and part-time laborers in the 1960s. Originally, it was constructed with funds from the National Science Foundation funds to carry out the dedicated task of creating the most accurate radio map sky ever.

But Big Ear didn’t look like other radio telescopes. It looked like someone covered a football field in white paint and installed bleachers at either end behind the goalposts. These “bleachers” were actually feed horns to funnel radio signals from the telescope’s large reflector to its receiver.

However, after Big Ear completed mapping the radio sky in 1972, the telescope needed a new task.

Beginning in 1973, NASA agreed to fund a largely volunteer-staffed effort to search the sky for radio signals from technologically-advanced aliens. Besides the professional astronomers behind the project, a group of doctors, lawyers, school teachers, and college professors from totally unrelated professions also pitched in over the decades.

“We were operating on a shoestring budget, we didn’t have the money to pay folks, which is why those who were involved were volunteers.”

To Ehman, reviewing large printouts of data every few days was a routine part of being a volunteer. And on August 17, 1977, as he looked through the latest stack of papers, he spotted a set of numbers and letters: 6EQUJ5.

To the untrained eye, it looks like nonsense. But to Ehman, the data meant that Big Ear had picked up a very strong signal that started out low, increased in strength, and then dropped off again. That meant the signal was likely picked up as one particular region of sky passed over the detector. It wasn’t earthly. The signal also only appeared in one of 50 possible channels.

It was a narrowband signal, exactly what we were looking for [com o SETI]. It didn’t take long for me to recognize that this was extremely interesting. And the word ‘Wow!’ It came to my mind very quickly, so I wrote it down.

But as he examined the data for the following days, he was surprised to find that the signal did not reappear. His intrigue only deepened after meeting with the director and the staff of the observatory. Together, they searched the sky for any possible objects in that region of the sky that could explain the sign. Astronomers have checked everything from comets and planets to satellites and more. Nothing matched.

The team kept Big Ear observing that same celestial spot for a month, yet they found nothing. And a year later when they tried again, they still came up empty. The SETI project at Big Ear ultimately lasted for 24 years, making it the longest-running continuous SETI search in history. But during that time, the investigators never picked up anything else quite like the Wow! Signal. For Ehman’s part, he also maintains that we may never know exactly what he discovered that day.

No conclusion was possible, except that it certainly had the potential to be a sign of extraterrestrial intelligence.

In the end, Big Ear’s death came just a few years after Congress deemed the search for extraterrestrial intelligence unworthy of taxpayer funds in 1993. The observatory lost its $100,000 in annual funding from NASA, plus another $50,000 slated for an instrument that could’ve given Big Ear a new lease on life.

By 1998, Ohio State University had demolished the telescope.

If the Wow! Signal was detected today, the SETI Institute’s Allen Telescope Array in California could alert astronomers instantly, letting them backtrack in real-time to search for the source of the anomaly.

Over the years, many other astronomers have followed-up on the Wow! Signal, either trying to explain it away or relocate it. But to astronomers like Shostak, the signal is really just one of many similar detections made over the years.

At that time, it was very common to capture these types of signals only once. Computers did not have the power to track in real time. If you caught it today, the computer would say ‘Wow!’, And astronomers would begin to point the telescope at the Wow Sign! to try to find out what it was.

After the observatory’s computers became sophisticated enough for real-time tracking, the number of mysterious signals dropped.

The aliens knew that we now have better equipment.

For example, in recent years, astronomers have discovered Rapid Radio Bursts (FRBs), which were initially seen as strong radio signals that appeared only once. The discovery of FRBs, as well as progress in tracking their origins, was one of the greatest recent advances in astronomy.

Meanwhile, Shostak sees the fixation on the Wow Sign! as something that the public is much more interested in than astronomers.

I receive emails at least once a month from people who look at that impression and interpret that data in all ways.

People often see this as an alien code that is being sent as a direct message to humans. They do not realize that the combination of numbers and letters in the print was just a convention established by astronomers who worked at the observatory. Impressions could not handle numbers greater than nine, so the display circulates through the letters, starting with “B”, for each increasing order of intensity.

People think they’ve figured out what the message is or how big the aliens are. And it’s like a dozen numbers, and all the printing does is provide the level of intensity.

But even though it was the first message from humanity’s aliens, Ehman still has no idea what she could have said.

Who knows? I have no idea what can be contained in the message, if anything.

Advertisement. Scroll to continue reading.
In this article:anomalies in astronomy,Wow Signal