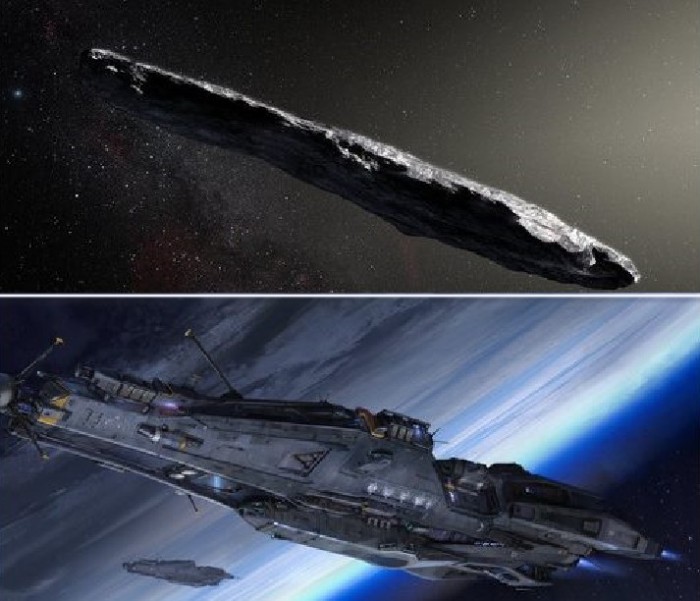 The name of this unusual object is also quite suitable: “Oumuamua” is in Hawaiian “wanderer who came first from afar.” So it was named by astronomers of the Haleakal Observatory (Maui, Hawaii). The longer the observations continued, the more mysteries there were.

The first of them is an atypical form for the asteroid, it is long and resembles a cigar, and its length is about ten times the diameter.

The second riddle is its strange movement. The asteroid, once launched into flight, did not move like a rock, and didn’t change its orbit. It … accelerated, as if some engines were turning on, and then off, just as a spacecraft should do to go from orbit to orbit.

Scientists from NASA and the European Space Center, after months of observation, concluded that the asteroid’s trajectory was not ballistic. Oumuamua seemed to refute the laws of celestial mechanics.

At the same time, physicists and astronomers are sure that the asteroid is still not a creation of someone else’s mind – it’s just that gravity affected it. And in this sense, Oumuamua does not behave like an asteroid, but like a comet: approaching the heat source, the star, it warms up and gases from under the surface burst out, thus changing the trajectory of the object.

Recall: for the first time, it was spotted on October 19, 2017, by astronomers in Hawaii. It moved towards the Sun at a speed of 87.3 km / s along a hyperbolic trajectory. That is, it was a cosmic body that flew into the solar system from outside, from one of the closest constellations, possibly Lyra.

Further observations also recorded that it rotates with a circulation period of 7 hours and 18 minutes. During rotation, it changed its brightness, and thus the more than extraordinary shape of the object was clarified – not at all “asteroid”.

The length of the asteroid was first determined at 400 m, so the “diameter” would be about 40 m. But now NASA has clarified that the length is probably twice as long – about 800 m. Probably, the color of the asteroid is closer to red or red-brick, on the surface – extremely rough terrain.

Scientists, unintentionally gave enthusiasts long-desired information. If a certain cosmic body spontaneously changes the speed of its movement, accelerating, and at the same time has a distinctly cigar-shaped shape, then it can only be … a spaceship.

By the way, this opinion was also shared by some of the astronomers and even the famous scientist Stephen Hawking. At the initiative of the scientists of the Breakthrough Listen project, a 110-meter antenna of a radio telescope operating in Green Bank (West Virginia, USA) was sent to the facility. If it was a spaceship, it could send some kind of signals – both for the search for other civilizations, and for research purposes.

Unfortunately though, not a single signal from the object could not be fixed. It may be so that this is a ship whose crew has long been dead, but the automation is working properly. Oumuamua could be a kind of “Flying Dutchman” of space…

By the way, about the comet hypothesis. Scientists, who were at first convinced that the gases “corrected” the asteroid’s orbit when approaching heat sources, were forced to notice that when approaching the Sun – a source of very intense heat – not a single gas stream appeared from under the surface. In any case, not a single such case has been recorded.

But this does not bother “serious scientists” – there can be only one reasonable explanation: Oumuamua is an interstellar comet.

However, Stephen Hawking was of the opinion that Oumuamua is an artificial object.

Attempts were made to obtain more or less high-quality images of the asteroid from the Earth, however, without success. If Saturn’s Cassini Station (NASA) would continue to function, it would be able to “intercept” the object and take a few shots. But in 2017, the station died.

Now is the time to recall the famous “Rendezvous with Rama”, a novel by Arthur Clark: the asteroid turned out to be a long dead, cigar-shaped spaceship. However, they were able to explore it. The dimensions of Oumuamua are more modest, but the proportions are the same. And the route coincides – like Rama, Oumuamua entered accidentally the solar system.

Today, there are several hypothesis about what Oumuamua is: a planet was “torn apart” by powerful gravity and before us, is its fragment – either an asteroid or a comet. And the second branch of hypotheses is a spaceship or part of it, for example, a “sail” that moves a ship due to the “solar wind”.

Unfortunately, we have no chance to check what exactly visited the solar system – Oumuamua has been moving away from the Sun for a year now. In 2019, it passed the orbit of Saturn, and by 2024 it will cross Pluto’s orbit.

Humanity has to wait for new meetings, perhaps with similar objects …

In this article:alien spaceship, Oumuamua