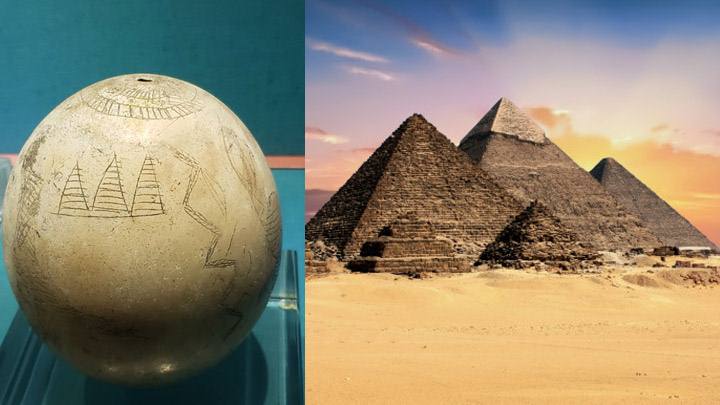 Ostriches were hunted by the ancient Egyptians from pre-dynastic times. Their eggs were widely used during this period for various purposes, from serving as food to containers once emptied. One of these eggs was found in a tomb in Nubia, belonging to the Naqada I culture and dating back more than 5,000 years. The peculiarity: it has painted what some have associated with the Giza pyramids, something impossible considering the official date of construction of these monuments. But … are they really pyramids?

Egyptologists estimate that the great pyramids on the Giza plateau are about 4,600 years old. However, because they are made of stone, traditional dating methods, such as carbon-14, cannot be used to estimate their age. To make matters worse, the absence of significant inscriptions within these structures and the clear architectural involution produced later, they suggest that the Egyptians of the time of Cheops, Khafrén and Micerino, perhaps were not its builders – or if they were, they received help from someone more advanced.

For the reasons outlined above, much of what is known about the Giza complex is conjecture accepted as historical truth. For example, Egyptology assumes that the so-called builders’ cemetery, found in 1990 in the vicinity of the three pyramids and their satellites, housed those who erected these monuments. And while that seems logical, it is also the fact that in that place there are not as many tombs as there must have been builders to lift these moles — allegedly — with tools that had just come out of the Neolithic period.

And let’s not even talk about the Great Sphinx, whose face it does not match with that of the pharaoh who is blamed.

The pyramids in an egg?

The uncertainty created around the Giza plateau has led many to search for evidence beyond orthodoxy, some findings being quite substantial – to at least consider the hypothesis of greater antiquity – and others quite dubious.

And it is precisely one of the latter that represents a striking ostrich egg found in a tomb near Aswan. According to the dating, the human remains that lay in said tomb were 5,000 years old. Ergo, it seems reasonable to think that the objects found there, the funerary trousseau, were equally ancient. 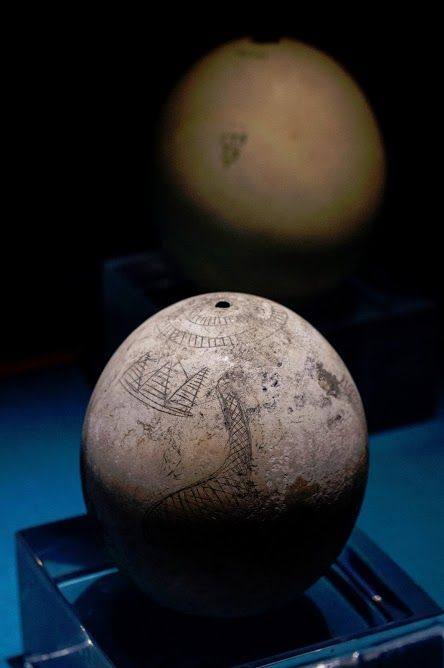 The object in the Nubian Museum in Aswan, Egypt.

The ostrich egg is decorated with a drawing of this animal next to what some boast, by similarity and proximity, are three pyramids and the Nile river on one side. But how is this possible if the monuments of Giza — according to the ruling party — did not yet exist five millennia ago?

The truth is that the proportion of these triangles does not coincide with those of the three on the plateau, where that of Micerino is clearly smaller in size.

Likewise, the triangles are geometrically isosceles, a shape that is more reminiscent of the humble – in comparison – and pointed pyramids of Meroe, in present-day Sudan and belonging to the kingdom of Kush. However, these structures were built as tombs closer to post-Christ dates and are located further south of where the ostrich egg was found – in a place that, in ancient times, would have been a different kingdom from that which ruled. over the Aswan area. 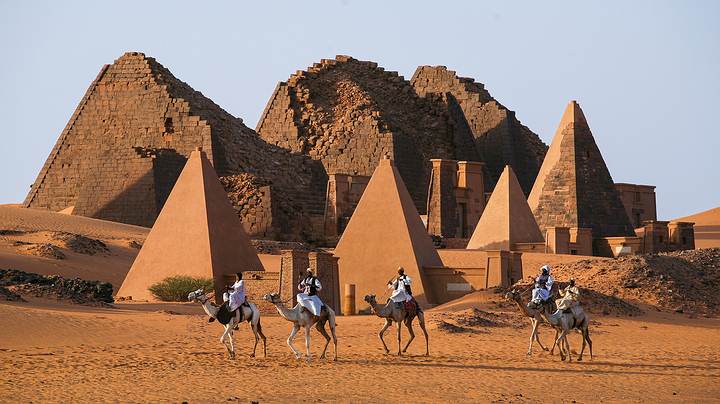 But then, if these triangles that decorate the egg do not represent any of the aforementioned pyramids, what do they symbolize?

The answer in chips

In 1988, in the footsteps of the famous Flinders Petrie, the German archaeologist Günter Dreyer set out to find the tombs of the Zero dynasty of Egypt. During excavations at Abydos, he came upon a mysterious 5,250-year-old tomb. Inside it he found objects that pointed to it would have belonged to a certain Scorpio king, until then had as a mythical predynastic figure by Egyptologists. 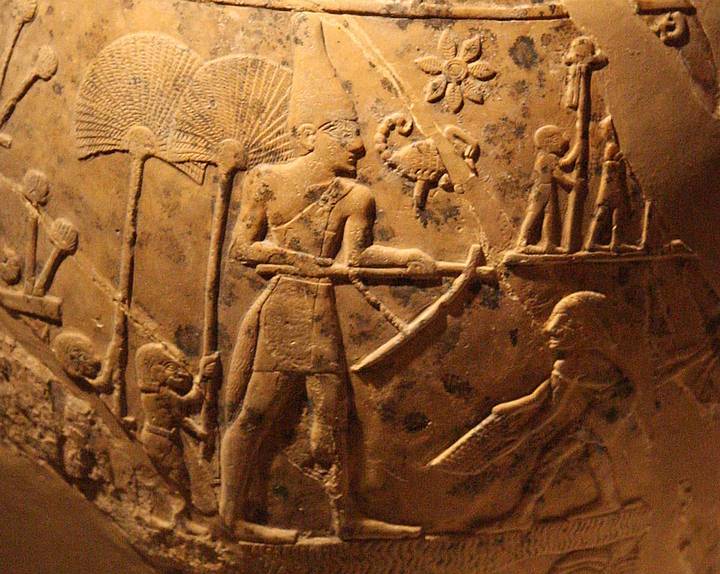 One of the most important things found on the floor of this tomb is what solves the riddle of the “pyramids” in the ostrich egg: stamps and ivory chips the size of stamps, 160 in all.

Each of these pieces was carved with simple figures: trees, birds, snakes, elephants, mountains, etc. At first glance, the images look like primitive drawings similar to those found in prehistoric caves and vessels. In cave paintings an image is what it is, an image of a bird means bird; but these chips meant something more.

Using Egyptian hieroglyphs as a guide, Dreyer and his team set out to demonstrate that these figures were symbols and that they represented the oldest known writing system. For example, one of them shows an elephant on some mountains; if we assign to this a phonetic value of a similar hieroglyph: the elephant represents the sound “Ab” and the mountains the sound “Yu”. Putting the syllables together we get “Ab-Yu”, which is the name of Abidos. And it was shown that the same thing happened to the other tiles, each one representing a place or city.

The triangles that we see in the ostrich egg, then, are nothing more and nothing less than mountains, as can be seen in this set of tiles: 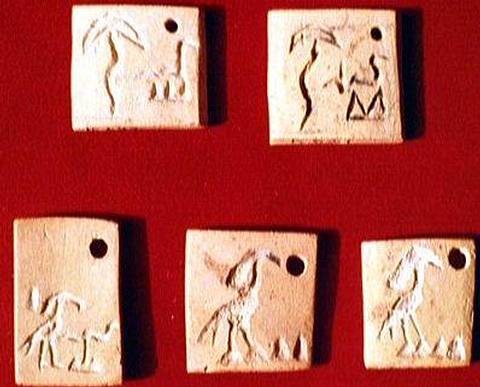 The line that appears in the mountains does not represent the rows of rocks of the pyramids, as the rest of the figures are not made up of blocks either, but rather are mountains drawn using that decorative style characteristic of the Naqada I period (that type of decoration disappears in Egypt in Nagada II). Credit: Egiptomania.com

The textual translation of the labels in the image above is: “(From) the mountains of darkness,” that is, the place where the sun sets, the west. The curved line over the mountains is a snake that represents the sound “dy” and is a phonetic complement to the word “mountain = Yu”. So if the label belonged to a jug of wine, it should be interpreted as “coming from the west”. With two or three triangles they have the same translation and even if the serpent is omitted, since the sound represented is always «dyu = mountain / s». With the subsequent evolution of these signs, both their phonetic values ​​and their meanings will change.

We can conclude then that this puzzle is solved, and that evidently what is seen in the ostrich egg of the Naqada culture does not prove a greater antiquity of the Giza pyramids. However, it is still as amazing, as we are dealing with the first complete writing system, prior to the cuneiform characters of Mesopotamia and from which Egyptian hieroglyphs would later evolve.

It should be noted, to finish clarifying the matter, that in his unification campaign the Scorpio king conquered Naqada, in what was a decisive battle to seize power.

In this article:Giza plateau, ostrich egg