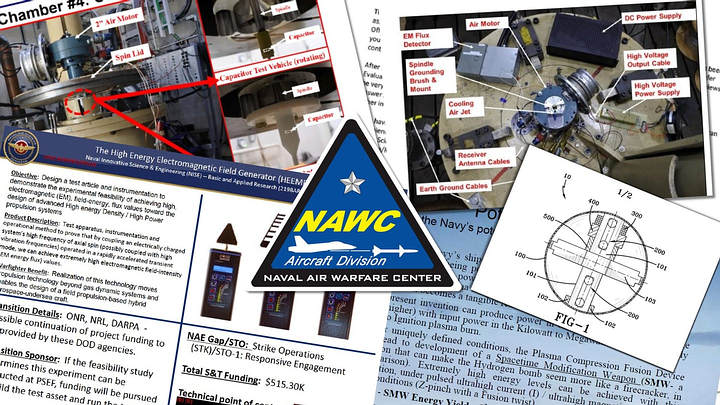 An investigation published in The War Zone claims to have obtained a wide array of documents detailing experiments conducted by the Naval Air Warfare Center’s Aircraft Division (NAWCAD) to test technologies that could be considered out of this world.

The new documents, obtained through the Freedom of Information Act (FOIA) provide information about the strange inventions of Dr. Salvatore Cezar Pais, an enigmatic aerospace engineer who works for the US Navy, and who counts among his patents to a device with the potential to become a “space-time modification weapon.”

That and other kinds of patents -Like that of a ship capable of ignore aero and hydrodynamic forces– were endorsed, according to the declassification, by the head of the Navy’s aerospace research company, who cites Chinese advances in similar technologies as one of the reasons for the unique development of these inventions.

As reported The War Zone, all patents are related to a program of basic and applied research in innovative naval science and engineering, under the project name “High Energy Electromagnetic Field Generator” (HEEMFG for its acronym in English).

The hundreds of pages obtained contain detailed technical drawings, photographs and data related to real tests of the HEEMFG. The system was intended to evaluate the feasibility of Dr. Salvatore Pais’ “Pais Effect”, a concept in theoretical physics that would be activated through the “controlled movement of electrically charged matter (from solid to plasma) through an accelerated spin. and / or accelerated vibration under fast (albeit smooth) acceleration-deceleration-acceleration transients ».

The Pais effect, claims its inventor, can lead to incredibly powerful electromagnetic energy fields capable of “redesigning the fabric of our reality at the most fundamental level,” leading to incredible revolutions in power and propulsion, quantum communications, energy production and even weaponry.

These latest internal documents show that NAWCAD considered this technology to be “important for national security and for leading to the generation of thermonuclear fusion ignition power with potential for commercial and military application.” 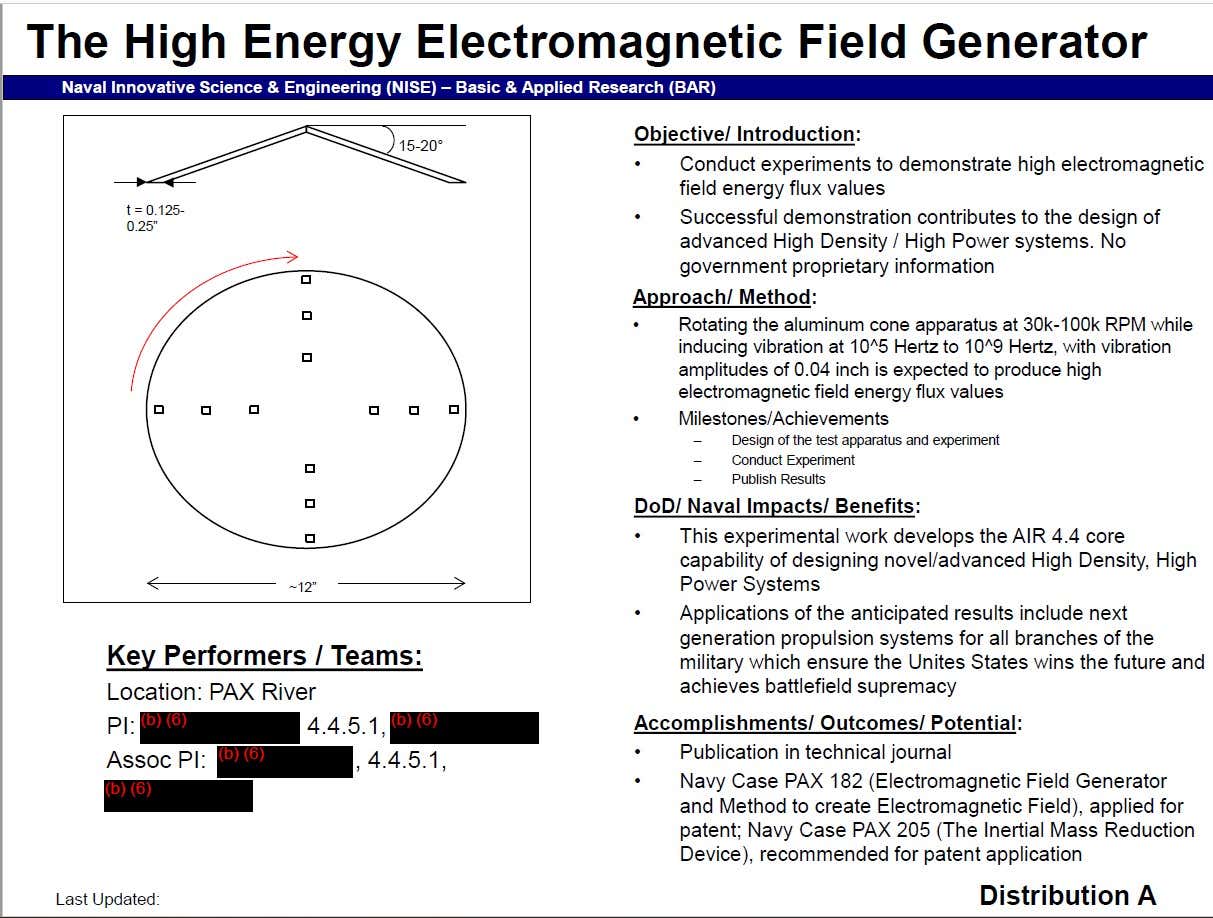 In addition, the documents contain the Basic and Applied Research (BAR) proposal that was sent to secure funds and resources for the proof of the concept of the Country’s High Energy Electromagnetic Field Generator. In total, it appears that at least $ 466,810 was dedicated to the project between fiscal years 2017 and 2019.

At this time, it is unknown if HEEMFG transitioned to other Department of Defense agencies, but The War Zone is following FOIA requests related to any possible collaborative transition.

The devices tested in the experiments appear to have been laboratory versions of Pais’ HEEMFG concept, or perhaps even multiple versions of the same idea. The devices used rotating capacitors to “demonstrate the experimental feasibility of achieving high values ​​of electromagnetic field energy flux towards the design of advanced high-energy / high-density high-density propulsion systems.” 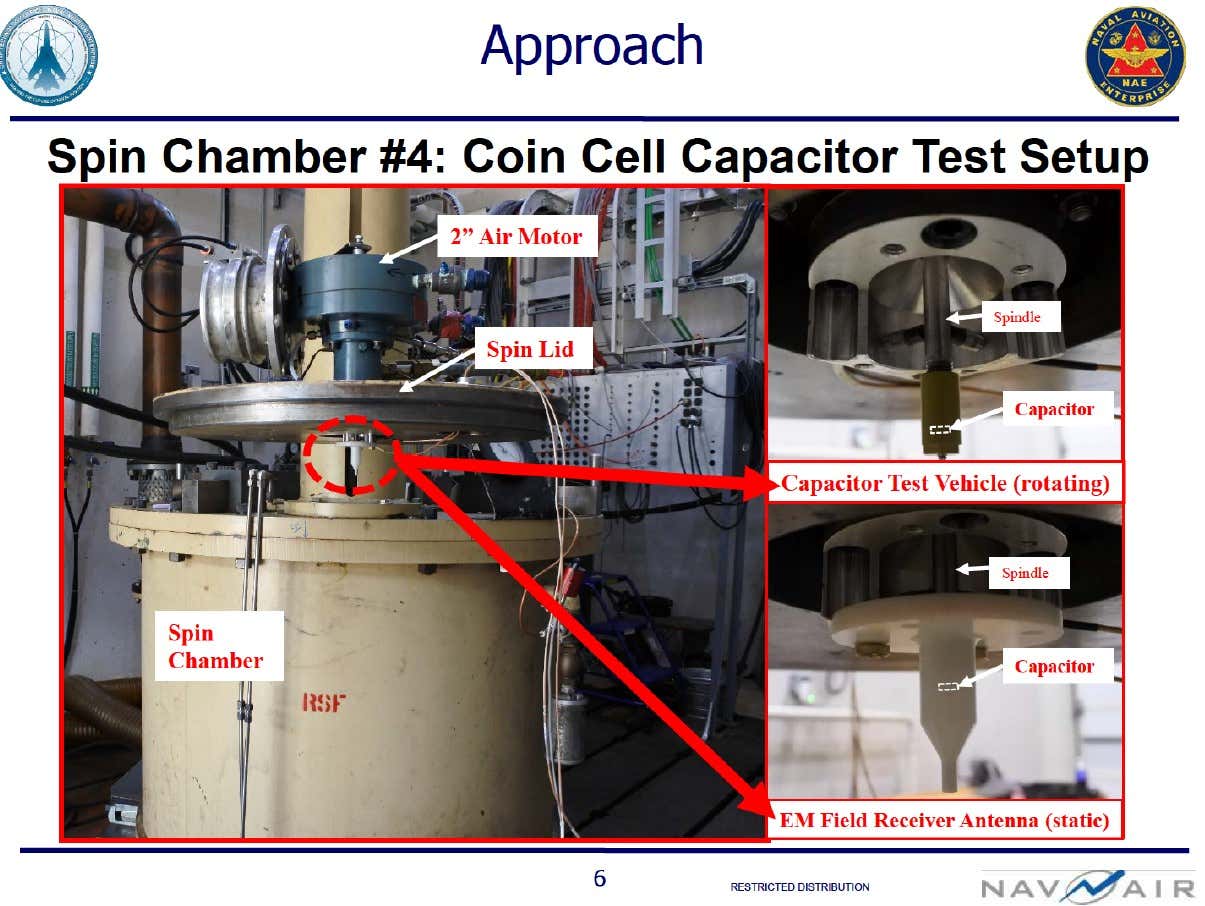 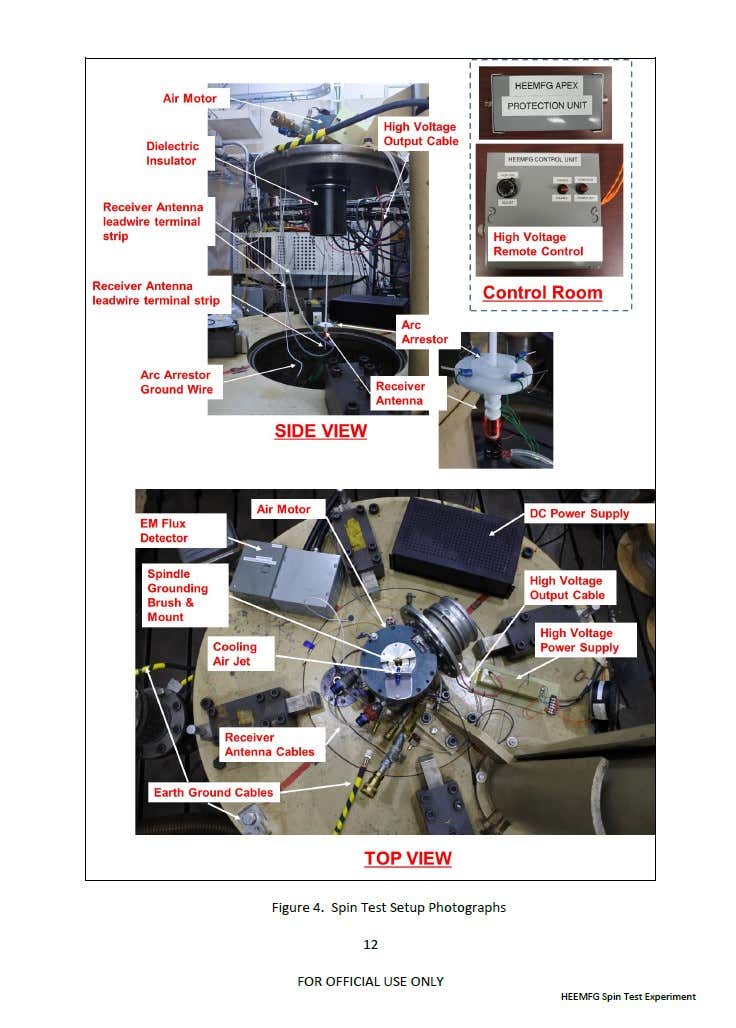 In a section describing the test results, the researchers reported that the technicians felt an odd sensation on their skin when they approached the test item, although they noted that there are many prosaic explanations for such sensations.

A weapon to modify space-time

One of the strangest documents in these publications is a slide deck marked for official use only (FOUO) describing how Pais’s plasma compression fusion device patent could be used to design ‘a space modification weapon -weather”: 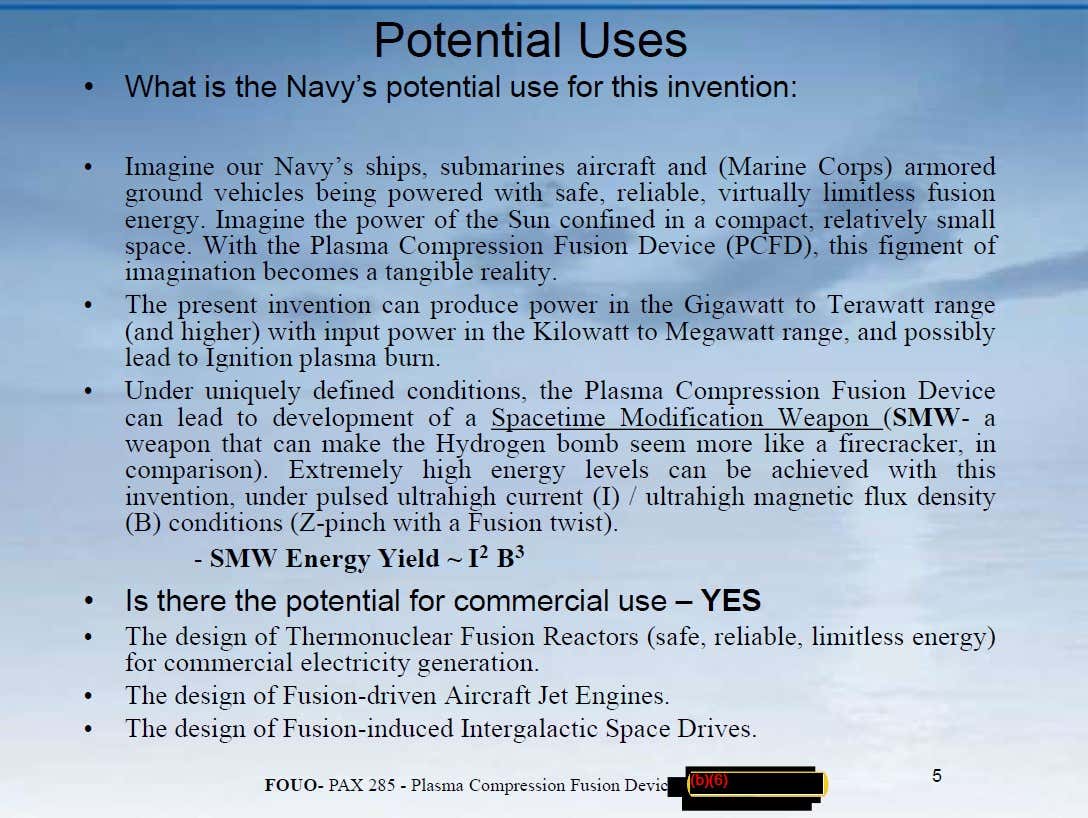 ‘Under uniquely defined conditions, the plasma compression fusion device can lead to the development of a space-time modification weapon (SMW, a weapon that can make the hydrogen bomb look more like a firecracker, in comparison) . Extremely high energy levels can be achieved with this invention, under ultra high pulsed current (I) / ultra high magnetic flux density (B) (Z-clamp with a melt twist) conditions.

Due to very little information about his identity, which is limited to a graduation from Case University of the Western Reserve (Ohio State) and various jobs, many have suspected that Dr. Salvatore Cezar Pais did not actually have invented nothing feasible or relevant. Instead, they speculate that it could all be misinformation intended to mislead US strategic adversaries about the direction of the defense investigation.

However, new research from The War Zone he would be breaking a spear in favor of the veracity of the case.

“The further our research progresses, the more it appears that Dr. Salvatore Pais’s patents are exactly what they appear to be: hypothetical applications of theoretical physics that the Navy believes are viable enough to spend hundreds of thousands of dollars – and possibly a lot more — to one day be able to master them. However, considering that there have been all kinds of theories, ranging from a government disinformation campaign to alien emulation technology, behind these patents, we still cannot say conclusively what is happening here,” according to the article published on the portal. 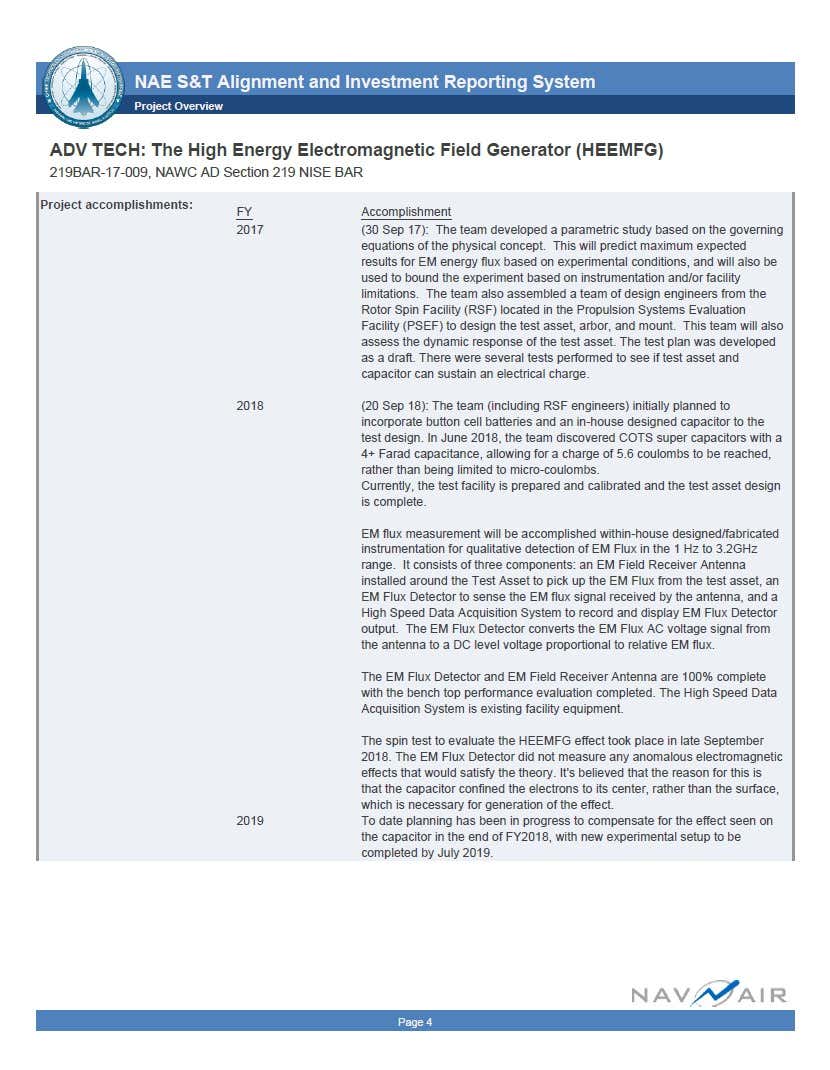 The experiments would have taken place as recently as July 2019

“Yet, taken at face value, these new documents seem to show that these inventions were not solely the product of an enigmatic nonconformist inventor, but were supported by the highest levels of NAWCAD and led to research projects and experiments. funded by the Department of Defense with a view to producing exotic new forms of propulsion and weaponry,” he continues.

‘Whether these experiments were the beginning of an imminent energy revolution or a dead end is not yet understood, but from the looks of the documentation we have studied, it appears that they were more of a beginning than an end. All this is fascinating, since no physicist with whom we have discussed Pais patents sees them as feasible; however, the Navy seems to have thought otherwise and spent considerable funds to explore the ideas in the form of physical experiments,” he concludes.