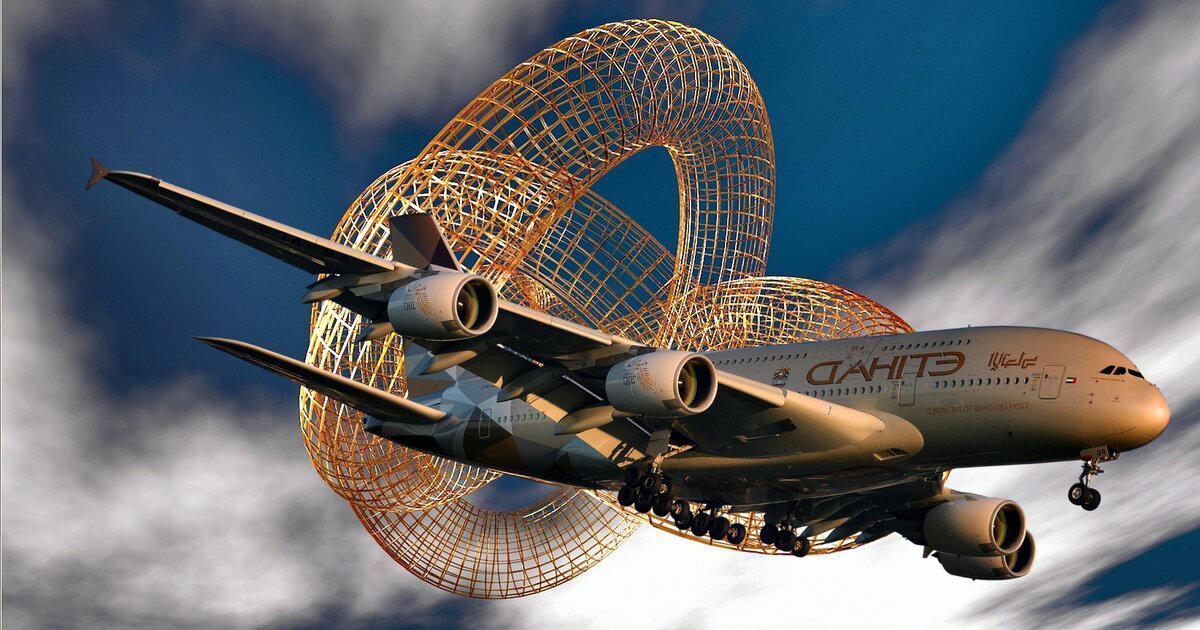 Such cryptic sightings as unknown flying objects or mysterious organisms moving through the air at an altitude of 30000 feet in front of astonished plane passengers are often reported by pilots. Who are these otherworldly entities and where do they come from?

Unfortunately, there is no exact information about these incidents, a fact which makes an accurate assessment difficult, since, as meteorologists note, we can talk about a rare natural atmospheric phenomenon.

Therefore, it would be important to know in which region these phenomena occurred, whether they were observed there before. At first glance, one might assume that they are clouds that quickly change their size and appearance under the influence of temperature, humidity or atmospheric pressure.

On the other hand, there is a possibility that we are dealing with a living organism. In addition to UFOs, this also includes angels and other entities from higher dimensions. These are entities that do not have a solid body, and therefore in this context we also speak of plasma entities, since the word plasma in Greek means “essence”. Plasma, by the way, is the fourth state of matter.

Plasma formations are one of the largest living formations in the Universe that do not have a uniform appearance. Because they have no physical structure, they can move and change shape quickly due to their high energy.

Plasma pervades our entire universe. After all, 99% of the visible space in the universe is plasma, including stars, galaxies, and clouds of cosmic gas. Plasma existed before the advent of all other forms of matter. In this context, we need to realize that there are many different forms of evolved life in the universe.

There is only what can be seen and felt

The problem that science faces today is that we automatically associate intelligent life with the physical body, because of our notion that only what we can see with our eyes and touch with our hands exists.

This outdated idea is completely wrong. In the meantime, we know that on many advanced levels that are completely unknown to us as yet, there are interdimensional light beings that exist in a formless or disembodied state as plasma beings.

These beings are even able to project their high consciousness into several dimensions at once and at the same time can create any kind of body if they want to incarnate, for example, on a three-dimensional level. But why doesn’t conventional science try to scrutinize this phenomenon? For many, the answer may be obvious: how can one study something for which there is no tangible and, above all, material evidence?

Therefore, scientists prefer to leave things as they are. After all, reputation in the scientific community is more important than revolutionary research results. The structure in the photo below may be a plasma craft, visible as a translucent body.

This shape of the object is often found around the world. Especially at high altitudes by pilots, crew members and passengers. Jean-Charles Duboc, a former French pilot, had a similarly strange encounter. Duboc remembers well this hitherto inexplicable incident at an altitude of almost 10,000 meters on Air France Flight 3532 from Nice to London in 1994. Duboc:

“It looked like a huge flying saucer. It stabilized and stopped moving. We observed an object to the left of our plane for more than a minute. Surprisingly, it completely stopped in the sky, and then gradually disappeared. We did not know anything about the nature of the UFO, it seemed embedded into some sort of magnetic or gravitational field and had no lights or other visible metallic structure.

At the same time, the radar of the Air Defense Control Center detected a point that for a minute crossed the trajectory of our flight. When I plotted the alleged location of the UFO on an aerial map, I was surprised to find that it was in close proximity to the Tavern base, where the headquarters of the French Strategic Air Command is located.

This observation was investigated by the French Army’s COMETA team led by General Denis Letty and in collaboration with several high-ranking French defense officers with GEPAN at the French space agency CNES.

The exact background of the incident has not been established – the Air France crew was convinced that it was not a sensory illusion only after landing in London.

Transport aircraft pilots experience unusual phenomena more often than anyone else. They are undoubtedly among the most important and probably the most knowledgeable eyewitnesses. They often have to be able to correctly evaluate and judge what is happening in the sky in a split second. This includes determining the height at which the object is flying, its course, and the speed at which it is moving.

Many pilots are afraid of possible reprisals if they report encounters with unusual objects, so they prefer to remain silent. James Courant, who has been a pilot for over 30 years, knows this. Courant has been dealing with this phenomenon for more than 15 years. Over the years, he met with many civilian and military pilots who told him about encounters with unknown objects and phenomena. The pilots are not afraid because of their status or the threat of reprisals against them but for their families, which confirms how difficult it is to talk about them in public.

Courant recalls an incident reported to him by a pilot over the Pacific Ocean in 1980, when an unidentified flying object more than twice the size of an aircraft suddenly appeared out of nowhere in front of the crew of a Boeing 747.

The Boeing pilot later spoke in a detailed interview with the Courant about the pressure he and the crew were under to not speak to anyone about the incident after landing in Japan. In recent years, the policy of censorship and intimidation has become much tougher. Anyone who contradicts the political narrative must now fear the worst.

This can be observed in all areas of research and science. However, as long as researchers and eyewitnesses are pressured by governments and organizations to keep silent about their findings and incidents, the truth will never become public.

In this article:atmospheric phenomena, Plasma UFO