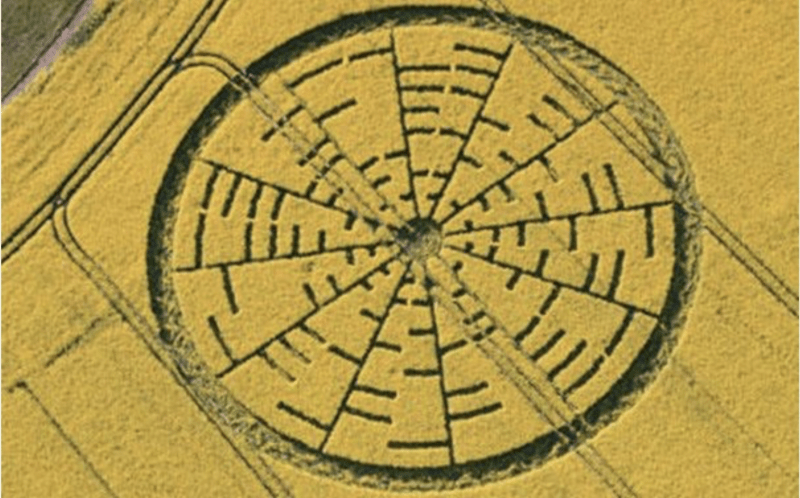 One of the ideas of how extraterrestrial beings can try to reach humans is through the universal language of mathematics.

The suggestion applies to the phenomenon of geometric agroglyphs, when concepts of advanced mathematics and fractals mysteriously appear in farmers’ fields.

What if advanced mathematics has similarly been hidden elsewhere, right before our noses in the first math system we still use today?

In 2010, a 90-meter pattern of lines and circles appeared in a field in Wiltshire, UK.

Agroglyph researcher Lucy Pringle found that it contained the Euler’s identity, which is the following mathematical theorem: (e ^ (i * Pi) + 1 = 0).

Independent noted that the equation is “widely considered the most beautiful and profound mathematical equation in the world”.

Of course, agroglyphs like this are officially considered to be made by probable human fraudsters.

However, these humans, whatever their true intentions, may be involved in something. If aliens want to communicate, it may be through mathematics.

A video from Anonymous Official explores the idea that intelligent beings communicate with us through mathematics.

Only this time, they suggest that perhaps communication has been right under our nose, as part of our daily way of life.

Every second, minute, hour, day and so on, the clock was initially constructed using the underlying mathematics, instilled in ancient wisdom.

Our daily life is structured in the number 60, in 60 minutes. A circular clock measures 360 degrees or 30 times twelve.

In our units of measurement, the number 12 appears repeatedly: from inches on a foot, months of the year, to the corresponding signs of the zodiac, up to the number of a dozen.

What are all these recurring numbers, even though we consider them common? Where did they come from?

The first system of writing and mathematics originated in ancient Mesopotamia, 5,000 years ago. Civilization has taken dramatic leaps in mathematics and writing.

They credited the information as knowledge of their gods, the Anunnakis, who came from heaven.

The mathematics used a long time ago was based on numbers 12 and 60 and is still used today.

Mathematics can also be represented as vibrations, in light waves and sound frequencies.

If you want to discover the secrets of the universe, think in terms of energy, frequency and vibration.

If we look at the vibrations, it was Pythagoras (about 569 BC – about 475 BC) who created the first documented tuning system for music, based on numerical proportions of fifth harmonics, an ancient musical scale.

Although Pythagoras did not know it at the time, he tuned musical instruments to reach 432 hertz or cycles per second.

This vibration was the way in which ancient musical instruments were tuned, such as the Tibetan Bowls, although they produced healing harmonic frequencies.

All over the world, the Maya created an inexplicably accurate calendar, taking into account the planet’s oscillation to calculate twelve months of 2160 earth years to complete the circle.

186,624 represents the speed of light in miles per second. This is precisely 432 squared.

As the Anonymous question:

What’s going on here? We have all these different things: Earth cycles, celestial and time measurements, geometry and frequency. However, they are all represented by the same numbers over and over.

Does all this go back to the mathematics that started everything in ancient Mesopotamia, with its measurement standards? Is number 432 a secret to decoding a higher understanding?

It is almost as if visitors to the God of Heaven, whom the Sumerians called Annunakis, had provided humanity with a counting system that would lead to the discovery of these synchronicities.

Is the number 432 really some kind of cosmic key that unlocked a language of superior understanding? And, in that case, have those sky visitors returned already to ensure that we do not lose the importance of matrix 432?

A pilot called George Van Tassel he calmly claimed to regularly meet with extraterrestrials who look like ordinary human beings in the 1950s.

One of the things he learned from these beings was a mathematical equation that opened up the means for time travel.

In the video below, the Anonymous also looked at this equation. They inserted the number of a Great Year described by the Mayans, 25,920 years old, in place of the digit 1. Then, the number 60 is inserted in time.

Once again, the number 432 emerges.

We know that sound frequencies have a direct effect on matter, as demonstrated in the science of cymatics and resonance experiments.

The particles organize themselves into geometric shapes, depending on the interaction with sound waves of different frequencies.

Could the 432 Hz frequency be of singular importance?

The patterns are beautiful, but is there any deeper meaning we are missing here?

Douglas Adams once joked about number 42 in the Hitchhiker’s Guide to the Galaxy:

The answer to the final question of life, the universe and everything is 42.

Perhaps, as it turned out, he was missing a number …

For more, check out the in-depth video of Anonymous Official and keep an open mind. Are we about to learn more about the secrets that were in sight from the beginning?