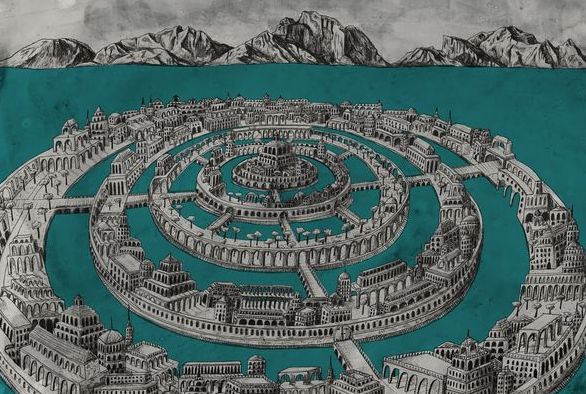 According to old legends that have come down to us from the ancient world,
Atlantis was the greatest civilization founded by the gods themselves. Long time its lands were ruled by divine descendants – the sons of Poseidon, until they ignited passions of man and did not swallow their vices and weaknesses.

The most famous description of a lost island is found in dialogues of Plato. In his narrative, the ancient philosopher describes the world Atlantis as a prosperous state of surprisingly high ethics and justice. Kings and rulers of the wonderful kingdom were set ten brothers descended from a mortal woman and the lord of the seas.

According to Plato, Poseidon of his own will built a great power on an island in the middle of the sea, called the Atlantic. He separated the island from the outside world with rings of water and a firmament. And in the middle of it he exuded two streams – with warm and cool water. The source nourished the lands of the entire state, making its soils rich and fertile. Peace, abundance and prosperity reigned in these places.

The majestic city was divided between the brothers into ten parts, where the eldest became the king over the kings – Atlant. The sons of Poseidon passed their power from generation to generation to their sons. And they lived according to the laws of friendship and reasonable patience, carved on a metal stele in the very heart of Atlantis, in the walls of the temple of the god of the seas – Poseidon.

None of the rulers then thought of violating the divine instruction, since each of them saw and understood the power of the benefactor. Then they honored only the height of the spirit, and treated material wealth almost as an unfortunate burden.

Times passed, and Atlantis reached such power that no existing civilization could surpass. The power of the sons of Poseidon went beyond their islands and reached the lands of Egypt and modern Italy. But once, as Plato writes, humanity prevailed among the rulers of Atlantis. The sons of Poseidon lost their divine nature and they became slaves of their greed, for which the gods decided to bring down upon them the punishment of heaven.

The death of the Atlantean civilization

Interestingly, Plato’s narrative of Atlantis ends at the moment when Zeus the Thunderer, angered by the fall of the morals of the Atlanteans, decides to send punishment on them. The dialogue of Plato with Critias about the lost civilization is mysteriously interrupted, being a lost or incomplete philosopher for an unknown reason. About the same fate that befell the lost city, Plato mentions further in the fragment “Timaeus”:

“Atlantis disappeared, plunging into the abyss. After that, the sea in those places has become up to this day non-navigable and inaccessible due to the shallowing caused by the huge amount of silt that the settled island left behind. ”

Ancient sources tell of the rapid destruction of the once prosperous island. Literally in one day, the world of Atlantis went under the depths of the ocean, taking thousands of lives with it, leaving more questions than answers for future civilizations.

According to ancient philosophers, Atlantis disappeared from the face of the earth more than 10,000 years ago. However, scientists are still debating about the sunken continent. Where was he when he drowned and did he even exist?

Someone considers the works of Plato utopia and fiction far from reality. But there are also those who do not get tired in their searches and actively explore the topic of the lost Atlantis civilization. Today, the search for Atlantis is concentrated off the coast of Greece, as well as in the bowels of the Atlantic Ocean. It is true that so far no reliable evidence has been found confirming the veracity of this story.

That Atlas and the Emerald Tablets of Hermes

Although there are allegations that the history of Atlantis is known only from the works of ancient Greek philosophy, there is another source, though no less mysterious than the rest. We are talking about the emerald Tablets of Hermes, found according to one version by Alexander the Great in the Egyptian temples of Giza.

Little is known about the origin of these mysterious artifacts. But today, the texts of the tablets in translation can be found in the public domain under the name “Emerald Tablets of Thoth Atlant.” The author claims that he is – That, the Atlantic priest who managed to escape during the death of Atlantis. According to him, after his homeland went under water, he went to the lands of Egypt, where he was engaged in education, passing on secret knowledge to the world.

In the emerald tablets, That Atlant also describes the cause of the death of the island of Atlantis, revealing that she went under dark waters because of pride that broke out in the minds of her “ascended” children.

“They were proud of their knowledge, proud of their position among the people. They plunged deeply into the forbidden, opened the gates that led down. “

That Atlas itself was chosen as the highest being, whom he calls the Inhabitant, to carry further the wisdom of the ages to people. Having left the dying Atlantis with several of his associates on the ship of the Master, He went to the abode of the children of Khem. Later, these places will be called the Kingdom of Egypt, but during the time of Atlantis, as the priest writes, these were wild lands and wild tribes lived on them.

According to the mystery described by Thoth, it was he who built the pyramids of Giza, which later became the temple and center of consecration for many millennia. In general, it was to the Egyptian teachers that the philosophers of the ancient world went for the mystical knowledge that came to our days through the ideas of Plato, the sacred science of the numbers of Pythagoras, the spiritual teachings of Jesus, Kabbalah and many other esoteric systems.

Atlantis has sunk into oblivion, perished under gigantic waves, but its legacy still wanders the world and finds publicity through the lips of Great Teachers and enlighteners of mankind. Whether the scientific community will one day find a valid confirmation of the existence and death of this great civilization is not known. But today, for many spiritual seekers, this story is an indisputable fact, the proof of which the zealous mystic is able to see in sources not direct, but indirect. Atlantis is alive for him, and he feels this in the rapid heartbeat, which is revealed in contact with secret knowledge, saved and revealed to the world by the great priest and consecrator of Egypt – Atlantian Hermes Trismegistus