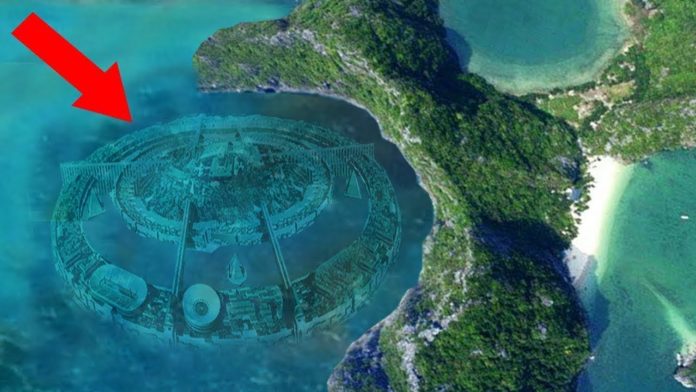 According to Timaeus and Plato’s Criteria, 10,000 years ago there was a large island with wonders and technologies that Poseidon himself granted them. The Atlantean Ring was adorned with geometric symbols placed following a specific arrangement.

Minerals abounded. In it there was a necropolis that was surrounded by water circles, palaces, temples, and a sanctuary for Poseidon, with gardens.

This place was inhabited by human beings born on Earth and primitive, and Poseidon crossed with a human and from that union were born 5 children.

The Atlanteans were not like the people of today. They had red skin, and some could be blue. Then they turned brown. They had a special skin with which they could withstand the sun’s rays, which at that time were stronger than now.

They were stronger physically, they lived longer. They were more developed spiritually and technologically. It was the powerful Atlanteans who conquered the tribes of Europe and North Africa.

But in 9,445 BC, the tribes of Athens led a resistance force against the Atlantean empire.

The alliance won, forcing the Atlanteans to retreat beyond the Pillars of Hercules, only to fall into natural disasters and sink into the ocean floor.

Whether it is true or not, according to John Echel, all that would remain would be the Luxor ring of Atlantis left in Egypt by an evacuated Atlantean priest.

According to the radiostesista André de Belizal, back in 1922, the Atlantis ring was given to Howard Carter as an amulet that would protect him from the curse of the tomb of Tutankhamen.

When Howard died, the ring fell into André’s hands, to be further explored for his mystical abilities in the 1970s.

The Atlantean Ring was adorned with geometric symbols placed following a specific arrangement.

It seemed different to any style indicative of Egyptian culture. Its design follows specific measures associated with proportions of sacred geometry. Therefore, it is said that the ring helps to protect and cure those who use it.

De Belizal was a practitioner of dowsing, -the study of vibratory fields within the human body-, which allowed access to information on animate or inanimate objects.

In the mid-1960s, De Belizal performed vibration tests on the ring using specially calibrated instruments to decode the resonant energy.

The results found that the geometric shapes of the Atlantean ring created a weak force field of energy that consisted of tiny vibrations.

De Belizal also said that the Atlantis ring and bar were based on the authentic waveforms found in the Egyptian sarcophagi to create a protection zone.

The Atlantean ring provides us with protection power against any physical or energy damage. It also gives us healing power. Wake up our intuition, and open us to new knowledge.

Advertisement. Scroll to continue reading.
In this article:Atlantis, Poseidon