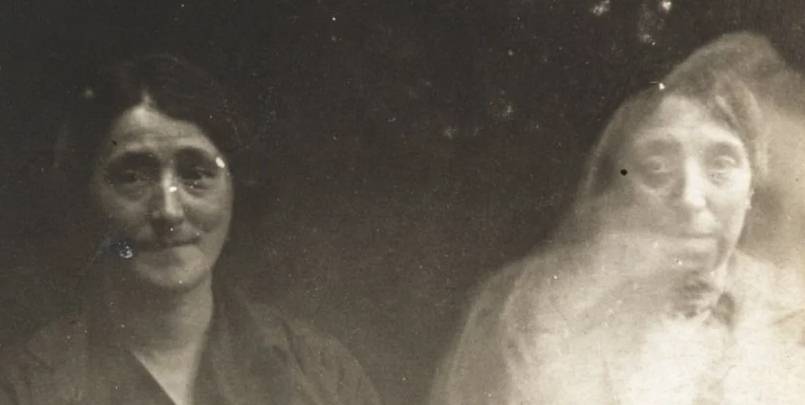 Scientists have identified traits that can make a person more likely to claim to hear the voices of dead people.

An example of Victorian spirit photography. (William Hope, c. 1920 / Collection of the National Museum of Media)

According to new research, predisposition to high levels of absorption in tasks, unusual auditory experiences in childhood, and a high susceptibility to auditory hallucinations occur more strongly in self-proclaimed clairaudient mediums than in the general population.

The finding could help us better understand the disturbing auditory hallucinations that accompany mental illnesses like schizophrenia, the researchers say.

The spiritistic experiences of clairvoyance and clairaudience – the experience of seeing or hearing something in the absence of an external stimulus, and attributed to the spirits of the deceased – is of great scientific interest, both for anthropologists studying religious and spiritual experiences, and for scientists who study hallucinatory pathological experiences.

In particular, researchers would like to better understand why some people with auditory experiences report a spiritualistic experience, while others find it more distressing and receive a mental health diagnosis.

“Spiritualists tend to report unusual listening experiences that are positive, that start early in life, and that they can often control,” explained psychologist Peter Moseley from the University of Northumbria in the UK. “Understanding how they develop is important because it could also help us understand more about distressing or uncontrollable experiences of hearing voices.”

He and fellow psychologist Adam Powell from Durham University recruited and surveyed 65 clairaudient mediums from the UK’s National Union of Spiritists and 143 members of the general population recruited through social media, to determine what differentiated spiritists. of the general public – who (generally) do not report having heard voices of the dead.

The results of the survey were surprising.

Compared to the general population, Spiritists reported a much higher belief in the paranormal and were less likely to care what other people thought of them.

Spiritualists in general had their first hearing experience when they were young, at an average age of 21.7 years, and reported a high level of absorption – a term that describes total immersion in mental tasks and activities or altered states, and how effective it is the individual to disconnect from the world around him.

Additionally, they reported that they were more likely to have hallucinatory-like experiences. The researchers noted that they generally had not heard of spiritism prior to their experiences; rather, they had found it while searching for answers.

These results therefore suggest that experiencing the ‘voices of the dead’ is unlikely to be the consequence of peer pressure, a positive social context, or suggestion due to belief in the paranormal. Instead, these individuals embrace spiritism because it aligns with their experience and is personally meaningful to them,” the researchers note.

“Our findings speak volumes about ‘learning and yearning’. To our participants, the principles of spiritism seem to make sense of both the extraordinary experiences of childhood and the frequent auditory phenomena they experience as practicing mediums,” Powell explained.

“But all of these experiences can result more from having certain early tendencies or abilities than from simply believing in the possibility of contacting the dead if one tries hard enough.”

Future research, they concluded, should explore a variety of cultural contexts to better understand the relationship between absorption, belief, and the strange spiritual experience of whispering ghosts.

The research has been published in Mental Health, Religion and Culture.

In this article:clairaudient mediums, clairvoyance