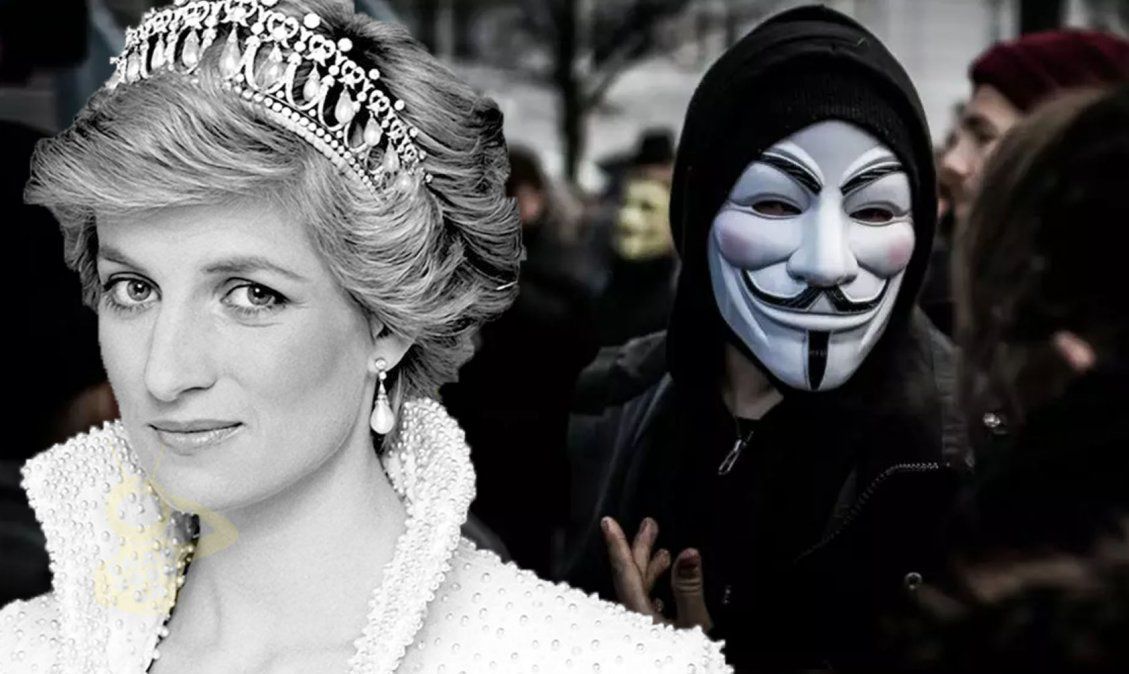 Amid the massive protests over the death of the US citizen George Floyd, caused by the Minneapolis police, information has circulated through social networks where the group of hackers Anonymous revealed the “black list of Jeffrey Epstein” and who were the celebrities who would have died from trying to expose it in the past.

According to the account OpDeathEaters, who has reappeared during these days after the murder of Floyd, the ex-wife of Prince Charles would have been killed by British royalty in August 1997, not having been an accident as claimed by the authorities.

As detailed by Anonymous, royalty would have decided to take Princess Diana’s life to silence her and prevent her from revealing the cases of corruption and child sex trafficking that allegedly involve the royal family.

In Anonymous’s brief, which was later deleted but “hunted” and translated by several Twitter users, Prince Charles is said to have kept a royal aide by his side despite being aware of several of his alleged violations.

Soon after the hacktivists made the revelation, social media has been buzzing with wild conspiracy theories and reactions demonstrating shock and disbelief:

#Anonymous Princess Diana and Marilyn Monroe two women who changed the world in different ways but who were murdered for the same reason, having evidence that committed the government and royalty in crimes of corruption and child sex trafficking. The world wasn’t ready for them pic.twitter.com/qdrQMiG7bu — Trending (@manueeljar) June 1, 2020

Anonymous also published a long list (AVAILABLE HERE) with names of politicians, businessmen and celebrities supposedly obtained from the cell phone of Jeffrey Epstein (billionaire and sexual predator of whom Netflix had released a documentary a few days ago). Among them are: Alex Baldwin, Naomi Cambell, Elizabeth Hurley, Michael Jackson, Mick Jagger, and Kevin Spacey.

In parallel, President Donald Trump was accused by the group of being involved in Epstein’s death to hide his alleged participation in a human trafficking network.

Finally, they also revealed that the musicians Chris Cornell, Chester Bennington and – more recently – Avicii, would have died because they discovered this sinister network, thus questioning whether their deaths were suicides.

Like almost everything in this life, things have a double meaning and intentions and this time it is up to ‘Yummy’, Justin Bieber’s new song, to be performed in an unexpected way. The song and music video were released this past January 3, 2020 and it is the first single from their next album.

It was about three years ago that the Canadian did not release a song, because he kept busy in other things and that is why the audience took a lot of importance, not only because of the melody but it turns out that part of the lyrics and the reason for the song it goes even further than a simple “que rico” (which means “yummy” in English).

It is considered that the melody could hide certain accusations from very powerful people of Hollywood.

In the video you can see elegant people decorating the food on the table, while children go out to entertain them. Giving reference to “Pizzagate” the term with which the famous sect of pedophilia in Hollywood is known, which is said to control the film and music industry and that if you want to succeed you have to somehow belong to it

Some time ago, Bieber stated that he had moved away from the music industry because it was simply controlled by the worst people.

Now we know that Justin Bieber is not the only artist who has talked about this and we will remind you of some other situations in which other famous people tried to open our eyes in another way.

Kappy was an American actor who killed himself at 42 after leaving a letter talking about all the hypocrisy and rubbish in the world in which he was involved, since he called himself a bad person for being part of it.

Before the sad event of his suicide, Isaac made a video in which he talks about the “hidden network” of these people who control all entertainment and started by saying:

“This is how the system works, they want to engage people because that way it is easier to be in control and many people do anything just for fame or money or you work, any of those things, I really don’t understand, many people from Truth is on the side of the devil”.

Both singers, very close friends and even collaborators, took their lives with days of differences and there are many suspicions involved. It was in 2017, in the month of May, that both singers committed suicide. The singer from Audioslave did it on the 18th and only two days later the vocalist of Linkin Park.

The celebrities were in the process of depression but never showed symbols of really wanting to end their life. So after his death all the investigations by the fans began, since the authorities had left it like that, but everything gave rise to someone wanting both of them to disappear from the map.

Cornell and his wife are known to have had a foundation called ‘Chris and Vicky Cornell’ where they cared for children in vulnerable situations and Bennington was one of the main collaborators. It is believed that this is the main reason, someone did not want them to continue helping children and people quickly relate it to pedophiles.

Before his death, Cornell had left an emotional letter to Bennington in which he said, “He prayed for you to find peace (…) Thank you for allowing me to be a part of your life.”

What have both artists wanted to tell us?

Feldman is a 48-year-old American actor who is generally recognized for his appearances in The Goonies, The Lost Boys, and Count on Me.

This artist started in the world of fame since he was just 14 years old and it is until now that he can talk about things that happened to him when he was little.

Mainly about the power that the hidden network of Hollywood can have and the many people who are involved but who are not really allowed to talk about it and who now understands how they persecuted him as a boy without even realizing it.

Even Feldman blames this whole ball of people for the death of Corey Haim (actor from Lucas, Silver Bullet, Murphy’s Romance, The Lost Boys, License to drive and Dream a Little Dream) who died at the age of 38 from an excess of drugs that he took voluntarily.

Feldman is planning to make a movie in which he reveals all these situations and people in Hollywood. Do you think I will succeed? Hopefully it will but it will be a difficult road.

“There are a lot of good people in this industry, but there are also a lot of really corrupt and sick people, they know they are above the law and that must change.” Feldman declared.

In 2016, actor Elijah Wood revealed that there is a whole network of child molesters in the film industry. The worst of the case is that they are protected because they occupy high positions.

“If you are innocent, have little knowledge of the world, and want to succeed, people with parasitic interests will see you as prey,” Wood explained in an interview with The Sunday Times.

“The victims cannot speak as loudly as they do. They can be silenced, but their lives have been irreparably damaged, “added Wood.

The Swedish DJ who campaigned against violence against people in all its forms and died in 2017 from suicide although people continue to be made quite suspicious.

The composer made a song and music video in which he talks about people seeking revenge from a network of people who mistreated and abused them as children and who really caused trauma. The name of this melody is ‘For a Better Day’. Anonymous assures that they “silenced” him.

Anonymous seems to have leaked an audio from Michael Jackson in which he claimed how they wanted to get rid of him:

“I don’t know if I should tell you this, I don’t know who may be listening to this. It could be a group of people, they want to get rid of me, they don’t want me around here anymore ”, the singer is heard saying to a man identified as Dieter, who says to him: “ I don’t understand, what do you mean. Tell me”.

“I can’t talk about it on the phone. I don’t know what will happen, but I feel in my soul that they want to get rid of me. They can shoot me, stab me, frame me and say it was a drug overdose.”

What happened next is history, the singer died on June 25, 2009 and the official version was a cardiac arrest at his home on North Carolwood Drive in Los Angeles, California.

What is really going on?

The truth is that after several years of inactivity, Anonymous returns to the fray. This has also sparked some criticism in the conspiracy community, where some have accused them of being opportunists and failing to provide details on the recent leaked information . But there are those who go further by ensuring that the hacktivist group is part of secret government agencies that aim to destabilize certain moments, such as what is happening today.

Even social networks would be tools to control the reaction of the population and interfere with their opinions and decisions. Whether true or not, the reality is that something is happening globally and it started with the coronavirus pandemic. Now you just have to wait for the following.

What do you think about the Anonymous leaks? Are they using social media to influence the population?

In this article:Anonymous, Lady Di