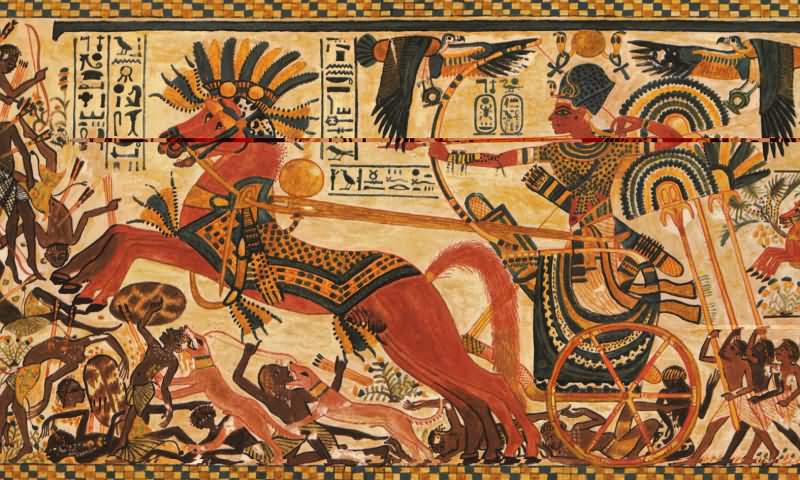 Psychological warfare involves constant deliberate pressure on enemy soldiers. Intimidation and misinformation lead to a decline in morale, demoralizing the enemy even before the battle itself begins. For thousands of years, brilliant strategists built their plans on the basis of subtle tricks, which also subjugated the civilian population of the newly conquered territories.

It is not the strongest army that wins at all – the one who knows how to maintain self-control and take control of raging emotions wins.

The sound of the Aztec death whistles was intended to convey the “cry of a thousand corpses”. In the 90s, archaeologists discovered the ancient graves of Aztec warriors, where similar whistles were found.

Experts believe that this sonic weapon was used before the start of the battle for a psychological attack. The hole of the whistle was carved in a special way and when blowing into it, the warrior extracted sounds similar to the cries of a man howling in pain.

This ancient treatise on the art of war was accidentally discovered in a junk shop. “36 Stratagems” is a collection of tactical tricks that can be used by a military leader to achieve a hidden goal.

The very concept of a stratagem has existed in China for three thousand years: it is a certain algorithm of behavior that allows you to gain a visible advantage even over a stronger opponent.

In 525 BC. e. the Battle of Pelusium took place, after which Egypt fell under the pressure of the Persian conquerors. Herodotus wrote that the cunning Persians painted cats, sacred to the Egyptians, on their shields.

Other totem animals were driven to the city, some warriors even threw unfortunate cats right on the walls. All this exerted strong psychological pressure on the Egyptians, who were shackled by religious fears.

The founder of the Timurid Empire, the famous commander and great conqueror Tamerlane did not stop at nothing to achieve his goals. His terror tactics were aimed at completely suppressing the very desire for resistance of the occupied peoples.

Having conquered Delhi, Timur the Lame ordered to massacre the population of the city as a warning to the whole country.

The glory of King Philip II is in the shadow of the conquests of his son, the great Greek conqueror Alexander the Great. However, it was Philip who laid the foundation for the future empire, consistently conquering territories important for development.

The cunning king won many battles thanks to his ability to think strategically. He understood the danger to the troops of the battle under the scorching sun and carried out false attacks to force the enemy army into a defensive position. After standing for several hours at noon, even the most persistent fighters lost strength.

In the period between 496 and 465 BC, the Yue kingdom was ruled by Emperor Goujiang, who became famous for his merciless attitude not only to enemies, but also to his own soldiers.

This ruler successfully used intimidation tactics: criminals condemned to death lined up at the forefront of the troops, who were ordered to cut their throats in front of enemy soldiers. Seeing such neglect of life, the enemy armies laid down their arms.

The first chariots appeared among the Egyptians around the 15th century BC. The army of Thutmose III already numbered a thousand war chariots. The crew of each consisted of a driver and a warrior armed with a bow and spears. The appearance of light, maneuverable war chariots on the battlefield had a huge psychological impact on the enemy infantry.

For example, the Hyksos invasion was stopped by the Battle of Kadesh: the frightened infantry could not hold their battle formations and were scattered throughout the battlefield.

In this article:fear, war tactics