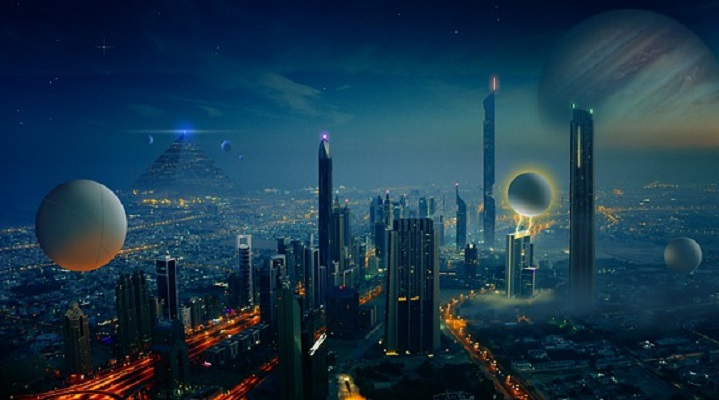 A team of researchers is analyzing 21 galaxies with high levels of radiation in the mid-infrared range. To their surprise, they found that the radiation of four of these galaxies was amplified by a factor of 10. Two of them are explained by natural processes, and the other two remain unexplained.

The two distant galaxies may be home to highly advanced alien civilizations. Traces of unusual activity have been found in both, which may indicate the existence of an extraterrestrial civilization of Type III on the Kardashev Scale.

One of the most asked questions of humanity is: “Are we alone in the universe?“.

The deeper we look at the universe, the more galaxies we discover. By 2022, researchers estimate that there are more than two trillion galaxies in the observable universe.

In our understanding of space and the number of galaxies that formed since the beginning of our universe 13.7 billion years ago, the Hubble Space Telescope is paramount.

One of the deepest images of space is the so-called “Hubble’s extremely deep field“. This image reveals the darkest and most distant galaxies ever seen, and allows experts to look farther than ever.

But even with this picture of about 5,500 galaxies, we are far from understanding the number of galaxies in our universe.

Are we alone in the universe? Although this question cannot be answered with certainty today, we may be close to understanding it.

Researcher Honging Chen and his colleagues at the Chinese National Astronomical Observatory are scanning part of the northern sky. Their goal is to see exactly where in this area there are signs of advanced alien civilizations.

Of the 21 galaxies they have studied, two stand out with anomalous features.

The results are presented in a study published in the Monthly Notices of the Royal Astronomical Society.

The universe is truly gigantic. Given various factors, such as its age, the number of stars and galaxies, it would be presumptuous to believe that Earth is the only planet where life originated.

Perhaps somewhere in a distant galaxy, not so similar to the Milky Way, a civilization has emerged that has evolved over millions of years and surpassed even our greatest technological advances.

To understand how advanced a potential extraterrestrial civilization can be, we use the Kardashev Scale, developed by astrophysicist Nikolai Kardashev in 1964.

It allows us to understand how technologically advanced a hypothetical alien civilization is based on the amount of energy it consumes.

Civilizations Type I: this is a potential civilization that is technologically advanced enough to use all the energy of its home planet.

Civilization Type II: this civilization could use the energy of the entire solar system, its Sun and the planets.

Civilization Type III: This potential civilization has reached such a level of technological development that it can use the energy of the entire Galaxy.

A Type III civilization can easily use the many stars in its Galaxy as energy sources by building hypothetical megastructures called Dyson Spheres. In this way, a civilization could collect all the energy produced by a star.

Thus, using thousands instead of millions of stars in its Galaxy, a Type III civilization can meet its growing energy needs, which will allow it to further evolve and explore the universe.

If Type III civilization placed Dyson Spheres around many of its stars in its native Galaxy, we could probably find traces of them.

This led Chen and co-author Michael Garrett to use the LOFAR radio telescope to search for any infrared signal that would indicate the presence of such megastructures.

They found 21 galaxies with high average infrared radiation, but four of these galaxies have a 10-fold increase in emissions.

In an interview with Inverse magazine, Chen says :

“Two of them have been identified as natural sources – one is an active galactic nucleus and the other is a star-forming galaxy, which means that their excessive radiation in the middle infrared region is the result of various mechanisms.

We do not know the reason for the high ratio of the average infrared radiation of the other two.“

“Radio and infrared emissions from each Galaxy correlate with each other. The radiation of galaxies transmits information about its heat through the infrared spectrum. As part of the search for something resembling extraterrestrial flue gases, the duo explored the mid- and far-infrared spectrum.“

Of the 21 Galaxies, two stand out and are possible Host Galaxies for extraterrestrial civilizations Type II. In both galaxies, researchers have failed to understand what caused the burst of radiation in the middle infrared.

Although extraterrestrial civilizations may be the culprit, other natural explanations cannot be ruled out, such as an unusually high rate of star formation or an extremely bright galactic nucleus.

It remains to be seen whether these galaxies are home to powerful and advanced alien civilizations. Future research and observations in different spectra can help us answer one of the biggest questions our species has so far failed to answer…

In this article:Dyson Spheres, Kardashev scale