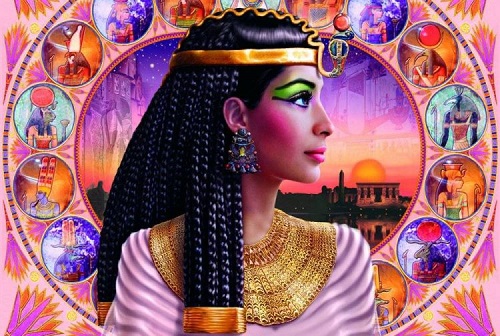 Sages and sacred knowledge exist in every culture. And despite the fact that the East occupies a leading position in this, Ancient Egypt also does not lag behind.

At one time, Egyptian civilization was the most developed and prosperous, and the legacy that it left behind is still amazing …

Find out what is hidden in the depths of your subconscious, according to the Egyptian horoscope that has come to us since the reign of the Gods …

God Nile is a source of infinite energy. The Egyptians believed that the Nile River gives life to all around. Representatives of this sign – nature is very passionate and impulsive. The motto is better to do and not regret than not to do and regret. They are suitable for any profession where you do not have to sit all day in the workplace.

Character: you easily adapt to any environment, you do not have to penetrate insights, your advice always gets to the point. You should be careful, as other people can use it.

In general, you are a cheerful and patient person, but when you get out of balance, you act impulsively, and this is not always good. Nevertheless, people around you feel calm.

Amon combined several characters: the god of the sun Ra, the god of reproduction Mina, and the militant god Montu. Amon-Ra was represented as a man with ram’s horns.

He patronizes the wise and whole-hearted natures, in which unlimited optimism comes first. Often these are leaders who choose professions and fully reveal their talents.

Character: your boundless charisma attracts people, you know how to convince and are so popular that you do not have time for loved ones. Courage and cheerfulness are your allies. However, this does not stop you from cunning.

The gift that Amon-Ra has awarded you is the ability to reassure. You are an excellent diplomat, although in a love relationship it is difficult for you to fully open your soul.

The goddess Mut symbolizes a strict mother and is the second most important goddess after Isis. She was portrayed as a woman with a double crown on her head, as well as a lioness or vulture.

People born in this period are demanding of themselves, always ready to help not in word but in deed. Among them are many researchers and testers who carry the mission of progress.

Character: you are very strong, healthy and you feel any trouble for a mile away, it’s not scary to go reconnaissance with you. Nevertheless, you are too emotional, which is why you have frequent mood swings.

You are able to live alone and improve your own world, in which there is no access to anyone. But when you fall in love, you will turn the mountains so that the union with your partner is strong and unshakable.

The Egyptians considered him a symbol of the Earth, lasting union and unity. Geb also symbolizes plants and minerals. If you were born under this sign, then you are a kind and subtly sensitive person. Geb patronizes psychologists, public figures and technical experts.

Character: your hands are truly magical, everything under them adjusts and blooms. Any grain that you throw into the ground will sprout. It may seem that you are lacking in energy, but in fact this is your internal principle.

You are impressive and very attractive, friends sometimes love you too much. A trusting and energetic person will be an excellent lover for you.

Isis symbolizes femininity and motherhood. She gained special popularity because she once revived her husband Osiris. She is often portrayed as a woman with bull horns, between which the solar disk glows. If you are a girl born under the sign of Isis, you will find true happiness, because the main feature of this goddess is love.

Character: where the ward of Isis is located, there is no place for dark forces. You are a lucky charm. You are open, ambitious, living at full strength without prejudice and remorse.

The main weakness is excessive idealism. Having not once found a worthy person, you are disappointed and live alone. Nevertheless, you continue to love people and trust them endlessly.

Osiris is one of the greatest Egyptian gods. God of the dead, he spoke with people about their lives and was a guarantor of survival in the underworld. It symbolizes renewal, as it never dies.

His wards are excellent speakers and organizers. Sometimes it seems that these people see through others and nothing can be hidden from them.

Character: your curiosity pushes you to new unexpected experiments. You are confident in yourself and every moment you live to the fullest, absolutely not afraid of any failures. It’s as if there’s a loophole specially for you that allows you to “roll back”.

Nevertheless, you are prone to depression, and still inclined to look for a crane in the sky, when the titmouse is already in the hands. You should also think before sacrificing love for friendship.

He helped people to master speech, writing and arithmetic; he is considered the patron saint of scientists and philosophers. The god of knowledge and writing helped astronomers, bookkeepers and doctors.

People under the sign of Thoth are distinguished by the ability to analyze and logical thinking. Persuading others, they literally mesmerize, look directly into the eyes. They distinguish lies from truth in a few seconds.

Character: you steadfastly withstand all the obstacles that life has prepared for you, tend to get to the bottom of the truth, and everywhere you feel at home. All this will help you choose a profession that you will remain faithful to all your life. In love, you will give your partner all the best, and your shortcomings will remain outside his field of vision.

Anubis was engaged in embalming the dead, but under his leadership this ceremony took place festively, as they would say now, with jokes-jokes.

Anubis expected the dead at the entrance to the dark kingdom and presided over the trial of the soul. On the frescoes he is depicted as a jackal. Patron of “owls” – people who stay up late and get up late.

Character: you prefer twilight to dawn, the loneliness of a noisy company, but at the same time remain sensitive, sincere and faithful. You are somewhat idealistic and emotional, so you can succumb to depression, although often it is she who will show you the way out of a difficult situation. You are a great psychologist.

The main problem is the inability to change a decision once made. Soulmate is hard to find.

Set was considered a symbol of freedom, it is the god of darkness, disorder, deserts, storms and war. Often he was depicted as a man with the head of a boar. Those born under the sign of Seth are extremely ambitious, inventive, confident in themselves and in their rightness. These people often go into politics and occupy senior management positions.

Character: no one better than you can see the signs of providence and interpret them correctly. You are a conqueror and you think that obstacles are given only to overcome them.

It often seems to you that you can only rely on yourself, and egoism works like a shield reflecting everything that can hurt you. To preserve freedom you can retreat. In love it is worth controlling your jealousy.

Bastet is the goddess of love and fertility. She was portrayed as a woman with the head of a cat or lioness. She defended the pharaohs and humanity as a whole.

The cat gives its wards charm, the ability to subtly feel, understand the situation. These people make excellent teachers, florists and accountants, and women become ideal wives and mothers.

Character: you can relieve any stress, your aura is able to warm anyone with warmth, nevertheless you are used to “hold the blow”.

Excessive caution sometimes makes it difficult to correctly assess the situation, so it makes sense to open up to the world, to feel its breadth. Your charm, insight and sense of tact attract people to you. Relatives will be surrounded by your attention, care and boundless love.

God of heaven, stars, love, protector of the pharaohs, Horus – one of the most ancient and important Egyptian gods. It is most often depicted as a falcon. Those born under the auspices of Horus are made to fly.

They have great imagination, rich imagination, creative professions just for them. These are good biologists, zoologists and animal trainers.

Character: you are valued for your cheerfulness, nobleness and healthy pragmatism, which gives you the opportunity to clearly see the goals. You are not afraid of hard work, responsibility, you can take a chance.

The problem is lack of tact, despotism, because you love to control everything. As for love, constant feelings will most likely arise with age.

A deity with a lion’s head, whose main goal in life is justice. Sekmet was the goddess of quarrels and wars and was considered the source of human misfortunes, but in her power was also to save from diseases.

She patronized doctors and magicians. People under the sign of Secmet enjoy great authority among other mortals.

Character: your luck may cause bewilderment in others – you always appear at the right time and in the right place, you are lucky in everything.

You are passionate, proud and adamant, you control yourself well, which means you rarely make mistakes. Nevertheless, under the mask is a cautious and sensitive nature, eager for recognition. Flexibility, imagination and less self-criticism is your recipe.

In this article:Ancient Egypt, Horoscope