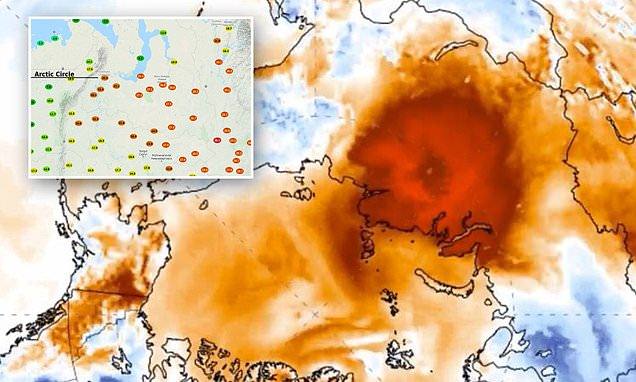 The current heat wave in the area, with totally unusual record temperatures at this time of year, has accelerated the start of the thawing season.

Climate scientists have observed an anomalous high-pressure weather system above the North Pole, which is causing temperatures to rise and offering records of even more than 20 degrees in some regions of Siberia.

The warm air over Russia has opened a path to the pole through which non-seasonal heat seeps into the Arctic areas. Meanwhile, the colder air moves south to Scandinavia and North America. The situation is causing the thaw to start earlier than expected.

“High pressure in the area has allowed clear skies, snow has melted and temperatures have reached levels we see in the summer,” Mike Rantanen said, a researcher at the Finnish Meteorological Institute, who recently shared a map showing the high temperatures throughout western Siberia.

“Climate change plays a role, but you have to consider that the overall atmosphere is hotter than, say, 50 years ago, which means that the heat associated with these high-pressure systems may be more intense now than it used to be. be,” Rantanen explained.

For his part, Severe Weather Europe, the body that analyzes these anomalies and centralizes the information to share climatic and meteorological data from Europe, ensures that the hot spots within the Arctic Circle have become 12 ° C above normal. The average global air temperature for April was + 1.16 ° C above the climate baseline of 1951-1980.

Models predict that the rest of 2020 temperatures will stay at least 2 ° C above average.

Much faster than in the rest of the world

The differences between temperature changes between the rest of the world and what is happening at the North Pole reflects how the Arctic is warming up much more quickly than anywhere else, impacting ecosystems and the 4 million people who call home to this area of ​​the world.

Striking to compare the timing differences in the start of the summer melt season in the Kara Sea – for instance, look at 2020 (red line) relative to the 1980s (purple lines) pic.twitter.com/9XkWTLONZQ

In Greenland, the thawing season has started much earlier than it should. Scientists calculate the start date of the season as the first of three days in a row with a thaw extent greater than 5% above the ice sheet. This year, this start occurred on May 16, when it usually starts in late May, almost two weeks later.

Thaw is common in the Arctic summer, but it usually doesn’t start until June, reports the Washington Post.

Ted Scambos, scientist at National Snow and Ice Data Center (CIRES) believes that warm weather could cause winter snowpack on sea ice to “mature” earlier this season, resulting in lower reflectivity, or albedo, and increased absorption of Solar energy.

Advertisement. Scroll to continue reading.
In this article:Arctic, climate crisis