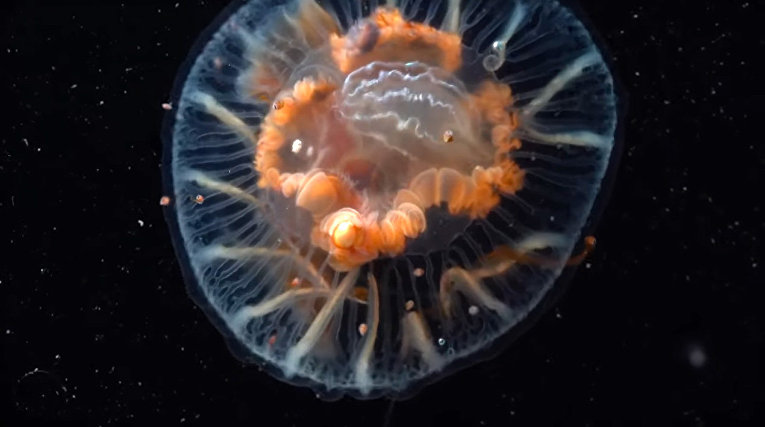 Rare jellyfish live in the sea near the South Pole. This was found out by one of the Australian researchers. He used holes in the ice, which scientists are drilling there, in order to remove not only algae, but also other creatures living in the sea. And it turned out that he managed to look into the world of truly “slippery types”.

The region around the South Pole is called Antarctica. Both land and part of the ocean are covered with ice.

To learn more about the algae found in Antarctic waters, scientists are drilling ice.

One of the researchers is Emiliano Cimoli and he works at a university in Australia and in his spare time, he did something else.

The fact is that Cimoli is also an amateur photographer. He used wells in the ice to remove not only algae, but other creatures living in the sea, according to a press release.

It turned out that he managed to look into the world of truly “slippery types”.

He filmed jellyfish and other small marine animals with a regular camera and with the help of underwater robots.

The footage helped scientists learn more about the jellyfish that live around the South Pole.

And that’s great, because studying jellyfish is actually very difficult.

Norwegian scientists also know about it:

“They are difficult to catch with conventional instruments because they fall apart very easily,” says oceanologist Tone Falkenhaug in an article by the Oceanological Institute, which is published on Forskning.no.

Drawings from a century ago

Much of our knowledge about jellyfish in Antarctica is more than a century old.

When Roald Amundsen led the first expedition to the South Pole, scientific research in Antarctica was very popular.

Since that time, we still have drawings of jellyfish that lived there.

Cimoli and other scientists who reviewed the video used these drawings.

They compared the jellyfish in the video to jellyfish drawn on paper 100 years ago.

The researchers found twelve different species of jellyfish in the videos. Four of them have not been previously described by anyone.

The rest were very similar to the previously known jellyfish. Either from old drawings or from newer descriptions.

Nevertheless, the video materials allowed us to learn something new.

For example, some jellyfish can bend their tentacles in half. Nobody knew this before.

Difficult to track the extinction of species

But what’s the point of knowing so much about these jellyfish?

Many researchers are working on describing different animals and plants. This is important for several reasons.

One of them is that human activities are often very harmful to life on Earth. And if you don’t study the species, it can be difficult to detect.

“No one knows how many unknown species we have endangered,” says Charlotte Sletten Bjorå in a University of Oslo article published earlier on Forskning.no.

She herself studies plants, but the same can be said for animals, both on land and in water.

The ocean is warming up and people are catching more fish

Now, when the climate on Earth is getting warmer, this is especially affecting the poles.

In 2020, a record high temperature was recorded in Antarctica.

Warmer oceans, more intense fishing and an influx of tourists could threaten life under the ice at the South Pole, according to researchers who looked at videos of jellyfish.

Therefore, it is very important to know what kind of animals live there now – so it will be easier for us to save them from extinction.