According to numerous ancient texts and books written over the years, hundreds of thousands of years ago, before recorded history, planet Earth was visited by astronauts from a strange world. These beings who settled in what is now the Persian Gulf, carried out activities to detect gold reserves in Southeast Africa and made a colonial expedition to Earth.

Today there are two types of people: those who look at the origins of life from a “scientific” point of view and argue that life on Earth began millions of years ago and that humanity eventually evolved from microorganisms to an “advanced species.” . Others argue that life was created by divine intervention. They argue that life on Earth is the result of God, a divine being who created everything: the Earth, the Moon, our Solar System, and the entire universe.

Basically, we were created – according to religion – by a far superior being.

We have two prevailing theories that explain what humanity is doing on Earth. Scientifically speaking, we still haven’t found evidence of life anywhere else, so it’s a bit difficult to test that theory.

If we take a look at religion, we will find something that is practically impossible to prove, but there are millions of people scattered around the world who firmly believe that humanity – and everything around us – was created by God.

If we discovered strange life in the solar system tomorrow, how would religion survive this discovery?

Interestingly, there are several ancient texts that predate the Bible; for example, Popol Vuh, the sacred book of the ancient Mayans that literally says that humanity was created by beings.

These beings who created humanity are referred to in the Popol Vuh as “the Creator, the Ancient, the Dominator, the Feathered Serpent, those who beget, those who give being, hover over the water like a nascent light.”

In the Qur’an we find the following:

This is why we ask again, who were these gods? Is it possible that some of the oldest writings on Earth – from ancient Sumeria – can help us understand the origin of humanity?

If we put aside both theories mentioned above, we will find room for one more, which according to many is as acceptable as the previous two.

Humanity: Created by a civilization from another part of the universe

This controversial theory is as acceptable as the other two.

Is ancient humanity a product of the ancients Anunnaki?

What if the controversial Zecharia Sitchin was right?

It begins with the planet Nibiru, whose long elliptical orbit brings it closer to Earth once every 3,600 years. The planet’s inhabitants were human-technologically advanced beings, standing about nine feet tall, Sitchin said in a 2010 interview with the New York Times. 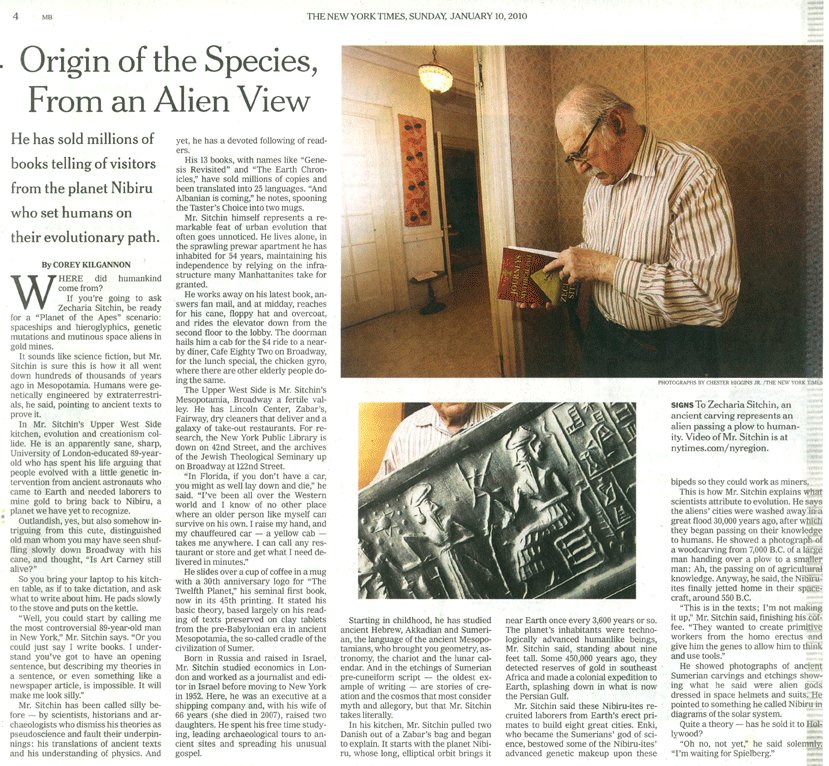 A few ago 450,000 years, they detected gold reserves in southeast Africa and made a colonial expedition to Earth, settling in what is now the Persian Gulf.

Mr. Sitchin added: “These Nibiru-ites (beings from Nibiru) recruited erect primate workers from Earth to build eight great cities. Enki, who became the Sumerian god of science, bestowed some of the advanced genetic makeup of the Nibiru-ites on these bipeds so that they could work as miners.

This is how Mr. Sitchin explains what scientists attribute to evolution. He says the aliens’ cities were washed away in a great flood 30,000 years ago, after which they began passing on their knowledge to humans. He showed a photograph of a woodcarving from 7,000 B.C. of a large man handing over a plow to a smaller man: Ah, the passing on of agricultural knowledge. Anyway, he said, the Nibiru-ites finally jetted home in their spacecraft, around 550 B.C.

”This is in the texts; I’m not making it up,” Sitchin concluded.

In his book “The Cosmic Code”, Sitchin writes:

There was a time, the Sumerians said, when civilized Man was not yet on Earth, when animals were wild and undomesticated and crops were not yet cultivated. At that time, a long time ago a group of fifty Anunnaki. Led by a being whose name was EA (Which means ‘Whose home is water’) they traveled from their home planet NIBIRU (‘crossing planet’) and, arriving on Earth, they landed in the waters of the Persian Gulf … This happened 445,000 years ago. “

The Anunnaki Chronology – Coming to Earth: (According to Sitchin)

After long wars, the atmosphere of Nibiru began to deteriorate and became a hostile place for life. The Anunnaki needed gold to repair their atmosphere. According to the researchers, we can use gold nanoparticles to repair our damaged ozone layer.

The Anunnaki aliens landed on Earth and established their base in Eridu, desiring to extract gold from the Persian Gulf. They were headed by Enki, son of Anu.

Gold production fell, which caused Anu to come to Earth. At his side, his other son Enlil arrived. Anu decided that mining would take place in Africa and promoted Enlil in charge of the Terran mission.

In southern Mesopotamia there were seven developed nations. Among the most important were: “Sipar”, “Nippur” and “Shuruppak”. After refining the metal, the ore was transported from Africa with “ships” and sent into orbit.

Interestingly, the old List of Sumerian Kings, one of the most interesting ancient texts ever found on our planet, detailing with great precision the rulers of the ancient Sumerian civilization, describes the Kings-Beings who ruled the Earth for thousands of years.

This ancient document describes a time on Earth when unknown beings lived for thousands of years and ruled the ancient cities of the region. Researchers have not been able to explain why the unique list combines the mythical pre-dynastic rulers with the historical rulers known to have existed and as such have mixed feelings when it comes to the interpretation of the Sumerian king list.

In this article:Sumerians, Zecharia Sitchin