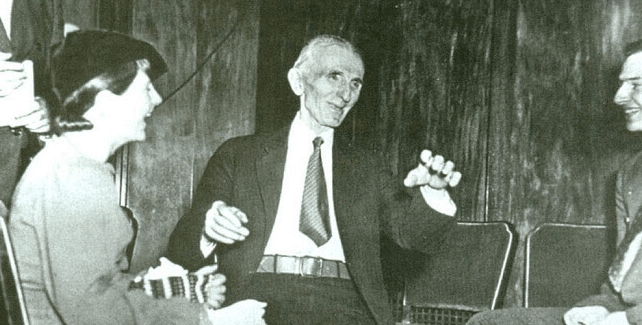 Nikola Tesla is considered one of the most innovative and mysterious men who have ever lived on Earth. He was a man far ahead of his time and is responsible for most of the technology we use today.

I WANTED TO LIGHT UP THE WHOLE EARTH. THERE IS ENOUGH THE ELECTRICITY TO BECOME A SECOND SUN. THE LIGHT WILL APPEAR IN THE EQUADOR, LIKE A RING AROUND THE SATURN.

In fact, if Tesla hadn’t invented and researched everything it did in its time, our technology today would be considerably worse.

Tesla’s inventions went far beyond electricity. He made groundbreaking discoveries such as wireless radio communications, turbine engines, helicopters (although it was Da Vinci who first came up with the idea), fluorescent and neon lights, torpedoes, and X-rays among others. At the time of his death, Tesla had close to 700 patents worldwide.

In this article we are going to take a look at a very rare interview, hidden for almost 116 years.

Journalist: Mr. Tesla, you have earned the glory of the man who became involved in cosmic processes. Who are you, Mr. Tesla?

Tesla: It is a correct question, Mr. Smith, and I will try to give you the correct answer.

Journalist: Some say you are from the country of Croatia, from the area called Lika, where trees, rocks and starry sky are growing together with the people. They say that his hometown is named after the mountain flowers and that the house where he was born is next to the forest and the church.

Tesla: Actually, everything is true. I am proud of my Serbian origin and my Croatian homeland.

Journalist: Futurists say that the twenty-first and twenty-first century was born in the head of Nikola Tesla. They celebrate the reverse magnetic field and sing hymns to the Inductions motor. Its creator was called the hunter who captured the light in his net from the depths of the earth, and the warrior who captured the fire from heaven. Father of alternating current will make Physics and Chemistry dominate half the world. The industry will proclaim him its supreme saint, a banker of the greatest benefactors. In Nikola Tesla’s laboratory the atom is broken for the first time.

Tesla: How the eyes open! … What I wanted to know is: what happens to a star that falls when the sun rises? The stars fall as dust or seed in this or in other worlds, and the sun is scattered in our minds, in the lives of many beings, which will be reborn as a new light, or the cosmic wind dispersed in infinity.

I understand that this is necessary included in the structure of the Universe. The thing is, however, is that one of these stars and one of these suns, even the smallest, conserves.

Journalist: But, Mr. Tesla, you realize that this is necessary and is included in the constitution of the world!

Tesla: When a man becomes concuss; That your highest goal should be to run for a shooting star, and try to capture it; You will understand that your life was given to you for this and you will be saved. The stars will eventually be able to catch!

Journalist: And what will happen then?

Tesla: The creator will laugh and say: “It will fall only if you chase it and catch it.”

Journalist: Isn’t all this contrary to the cosmic pain, which you mention so often in your writings? And what is cosmic pain?

Tesla: No, because we are on Earth … It is a disease whose existence the vast majority of people do not know. Therefore, many other diseases, suffering, evil, misery, wars and everything else that make human life an absurd and horrible condition. This disease cannot be completely cured, but awareness will make it less complicated and dangerous. Every time one of my near and dear people was injured, I felt physical pain. This is because our bodies are made of similar material, and our soul related to unbreakable threads. The incomprehensible sadness that overwhelmed us sometimes means that somewhere, on the other side of this planet, a child or a generous man died.

The entire Universe is in certain periods sick of itself, and of us. The disappearance of a star and the appearance of comets affect us more than we can imagine. The relationships between creatures on Earth are even stronger, due to our feelings and thoughts the flower will smell even more beautiful or it will fall silently.

These truths we must learn to be healed. The remedy is in our hearts and uniformly, in the hearts of the animals that we call the Universe.

In this article:Nikola Tesla, universe