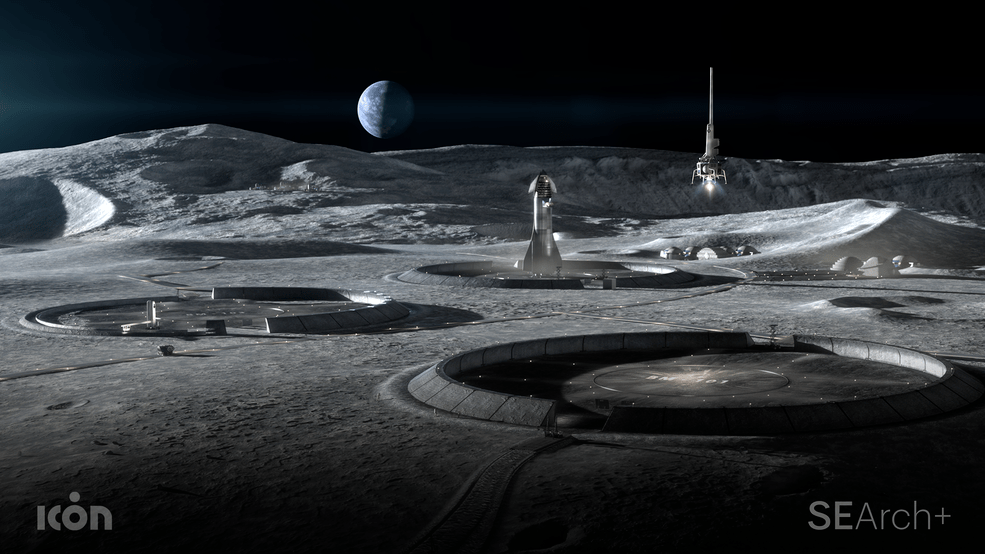 ICON illustration of a conceptual lunar base with 3D printed infrastructure, including landing areas and habitats. Credits: ICON / SEArch +

The process of building airstrips, habitats and roads on the Moon will likely be different from the common construction site on Earth. Digging robots, for example, will need to be light, but capable of digging in reduced gravity. A large-scale building system could be autonomous and equipped to function without the help of astronauts.

As part of the Artemis program, NASA has a concept for the elements of the central surface needed to establish a sustained presence on the Moon, which emphasizes mobility to allow astronauts to explore more and conduct more science. NASA is considering putting in place a vehicle for lunar terrain, a habitable mobility platform or lunar RV and a habitat surface on the Moon by the end of the decade. The agency is investing in advanced manufacturing – one of the five industries of the future to enable space exploration and improve life on Earth – including technologies that could find and use the resources available on the Moon and Mars to build future infrastructure.

Today, NASA is working with ICON, a construction technology company based in Austin, Texas, on initial research and development of a space-based construction system that could support future exploration of the Moon and Mars. The company has 3D printed communities of houses and structures on Earth and participated in the 3D Printed Habitat Challenge from NASA, demonstrating a method of construction and technologies that can be adaptable for applications outside our home planet.

“To be successful in our future missions, we have to invest in new cutting edge technologies today,” said Niki Werkheiser, program executive Game Changing Development from NASA. The program is part of the agency’s Space Technology Mission Directorate. “Short-term research and development will help ensure that we can expand construction capabilities in other worlds when the time comes.”

Another government agency in the United States is interested in the technology and its applications here on Earth. The United States Air Force has awarded ICON a dual-use contract for Small Business Innovation Research (SBIR), to expand the 3D printing of habitable and viable structures. Part of the contract, to which NASA has contributed funds, will explore the similarities between Earth-based and non-Earth based applications. ICON will also invest in the effort.

“The joining of forces and the division of costs between various government agencies allows us to accelerate the development schedule and bring in the main resources in which we have a common interest in practice earlier,” said Werkheiser. “Together, we will help mature technologies that will benefit humanity – on Earth and in space.”

ICON will work with the Marshall Space Flight Center in Huntsville, Alabama, on the project Moon to Mars Planetary Autonomous Construction Technologies (MMPACT) to test the lunar soil simulator with various processing and printing technologies. NASA is partnering with industry, government and academic institutions on the MMPACT project.

“We want to increase the level of technology readiness and test the systems to prove that it would be feasible to develop a large-scale 3D printer that could build infrastructure on the Moon or Mars,” said Corky Clinton, associate director, Marshall’s Office of Science and Technology . “The team will use what we learn from testing with the lunar simulator to design, develop and demonstrate prototype elements for a full-scale additive construction system.”

Based on progress, NASA could provide additional funding to ICON and explore the opportunity for a test in situ on the lunar surface.

“Since the founding of ICON, we have been thinking about building outside the world,” said Jason Ballard, ICON co-founder and CEO. “I am confident that learning to build in other worlds will also provide the necessary advances to solve the housing challenges that we face in this world. These are mutually reinforcing efforts. Sometimes, for bigger problems, it becomes necessary to look at the sky and not just at our feet.”

The SBIR award will be based on ICON’s commercial activities and demonstrations during Phase 3 of the 3D Printed Habitat Challenge from NASA. For the challenge, ICON partnered with Colorado School of Mines in Golden. The team won an award for 3D printing a sample structure that adequately held a seal when filled with water.

“It is gratifying to see competitors from previous NASA challenges continue to work with the government in other ways,” said Amy Kaminski, executive of NASA’s awards and challenges program. “It shows that our approach to reaching out to groups outside the traditional aerospace sector to solve the challenges we face in space and on Earth can result in unique collaborations to promote NASA’s technology development efforts.”

In this article:3D Printing, Artemis program