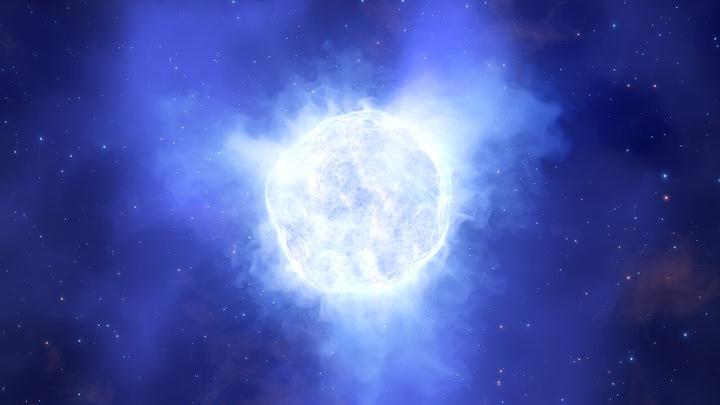 The star, with a brightness 2.5 million times more intense than that of the Sun, disappeared without producing a great supernova explosion. Something that until now has astronomers puzzled, who in the face of what has been observed have considered a new form of stellar death.

This illustration shows what the dwarf galaxy blue luminous variable star might have looked like before its mysterious disappearance. Credit: ESO / L. Calçada

Using the Very Large Telescope (VLT) from the European Southern Observatory, a team of astronomers has discovered the absence of a massive unstable star in a dwarf galaxy. Scientists believe that this could indicate that the star became less bright and was partially obscured by dust.

An alternative explanation is that the star collapsed into a black hole without producing a supernova. “If true, it would be the first direct detection of such a monstrous star that ends its life this way,” says team leader author of the discovery and PhD student Andrew Allan of Trinity College, Dublin, Ireland.

Between 2001 and 2011, several teams of astronomers studied this mysterious massive star, located in the Kinman dwarf galaxy, and their observations indicated that it was at a late stage in its evolution. Allan and his collaborators in Ireland, Chile and the United States wanted to know more about how very massive stars end their lives and the object of this dwarf galaxy seemed like the perfect target. But when they pointed ESO’s VLT at the distant galaxy in 2019, they could no longer find the star’s telltale footprints. 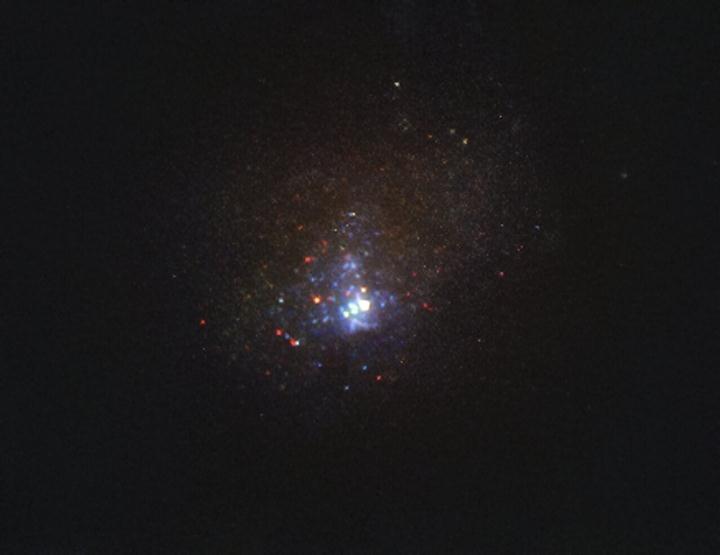 Image of the Kinman dwarf galaxy, also known as PHL 293B, taken in 2011 (before the disappearance of the massive star) with the NASA / ESA Hubble Space Telescope’s wide-field camera 3

“Instead, we were surprised to discover that the star had disappeared!” Confirms Allan.

Located about 75 million light-years away, in the constellation Aquarius, the Kinman dwarf galaxy is too far away for astronomers to see its individual stars, but they can detect traces of some of them. From 2001 to 2011, light from the galaxy showed consistent evidence that it hosted a “blue light variable” star some 2.5 million times brighter than the Sun. Stars of this type are unstable and show occasional radical changes in their spectra and brightness. Even with those changes, the blue light variables leave specific traces that scientists can identify, but these were no longer present in the data the team collected in 2019, leaving the question of what had happened to the star in the air.

“It would be very unusual for such a massive star to disappear without producing a brilliant supernova explosion,” says Allan.

The group of astronomers first directed the ESPRESSO instrument toward the star in August 2019, simultaneously using the VLT’s four 8-meter telescopes. But they were unable to find the signs that previously pointed to the presence of the luminous star. A few months later, the group tested the X-shooter instrument, also on ESO’s VLT, and again found no trace of the star. 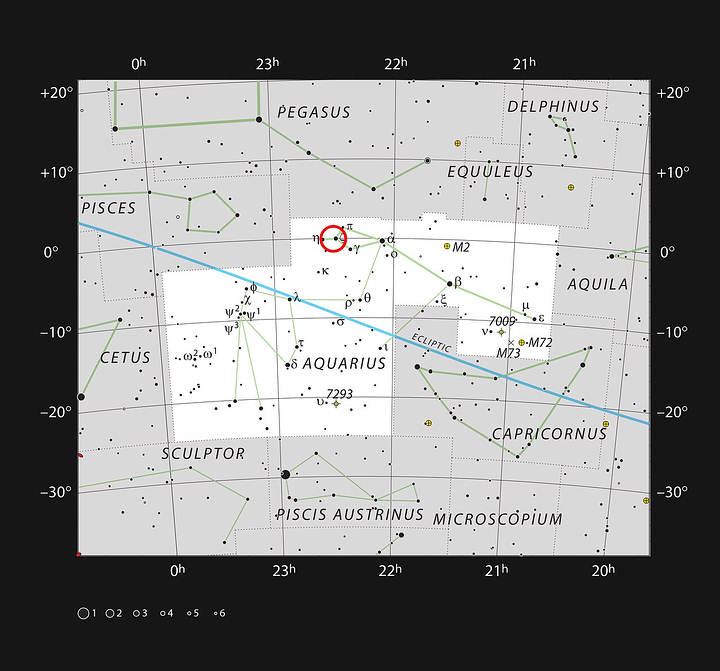 This map shows the location of the Kinman dwarf galaxy, where a mysterious blue luminous variable star disappeared. The map shows most of the stars that are visible to the eye under good conditions and the system itself is marked with a red circle. Credit: ESO, IAU and Sky & Telescope

According to team member José Groh, also from Trinity College Dublin, “we may have detected the death of one of the most massive stars in the local universe. Our discovery would not have been possible without the use of ESO’s powerful 8-meter telescopes, their unique instrumentation, and rapid access to those facilities following Ireland’s recent agreement to join ESO.

The team then drew on older data collected both with X-shooter and UVES instruments (installed in ESO’s VLT, located in the Chilean Atacama desert) and with telescopes from other locations.

“The ESO Scientific Archive allowed us to find and use data from the same object obtained in 2002 and 2009,” says Andrea Mehner, an ESO astronomer in Chile who participated in the study. “The comparison of the high-resolution spectra obtained by UVES in 2002 with our observations obtained in 2019 with ESO’s latest ESPRESSO high-resolution spectrograph was particularly revealing, both from an astronomical and instrumentation point of view.”

Ancient data indicated that the dwarf galaxy star Kinman may have been experiencing a strong burst period that likely ended sometime after 2011. Blue luminous variable stars of this type are prone to experiencing gigantic bursts throughout their life, causing the rate of mass loss of stars to increase and increasing their luminosity dramatically.

Based on their observations and models, astronomers have suggested two explanations for the star’s disappearance and the lack of a supernova, related to this possible outburst. The outburst could have resulted in the blue luminous variable transforming into a less luminous star, which could also be partially obscured by dust. The other option raised by the team is that the star may have collapsed into a black hole without producing a supernova explosion. This would be an unusual event, as our current understanding of how massive stars die suggests that most end their lives by exploding as supernovae.

More studies are needed to confirm what was the fate of this star. ESO’s Extremely Large Telescope (ELT) is slated to begin operating in 2025: This telescope will be able to resolve stars in distant galaxies like the dwarf galaxy Kinman, helping to solve cosmic mysteries like this one.