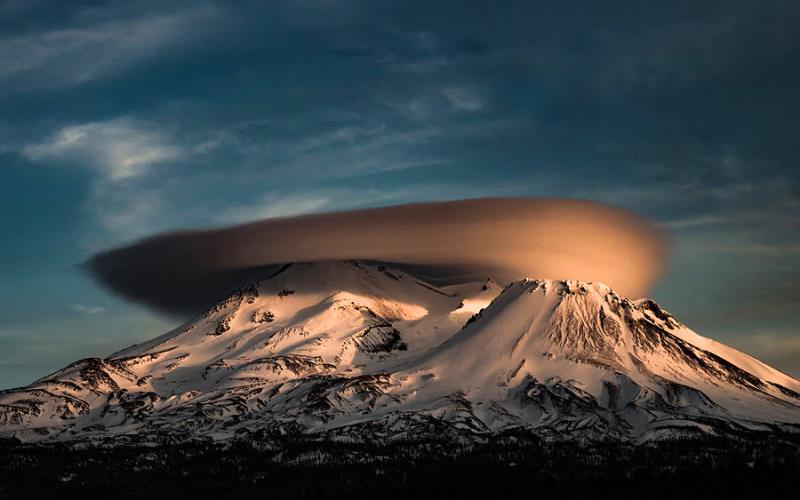 The lost continent of Lemuria is said to be somewhere near the Indian and Pacific oceans.

However, some ancient alien theorists believe that Lemuria was not a continent at all, but rather a giant mothership in the Indian Ocean, and that the mothership simply abandoned Earth after the Great Flood.

Due to the sheer size of the mother ship, ancient people might have thought it was a large island or continent, although another theory is that Lemuria sank into the ocean due to the pole shift, but there is no sign of this.

At the very beginning, one can correctly formulate the question, what does this have to do with Mount Shasta in California? So, according to legend, the last Lemurians migrated to the underground caves of Mount Shasta, and later many people reported seeing mystical creatures in strange clothes coming out of the caves.

They are said to be tall, have an organ or device on their forehead that looks like a third eye, and have pale skin. In 1962, Roger Hemmings and a group of campers said they saw three cloaked men come out of the cave and down the mountain, hovering two feet off the ground. All three creatures had a third eye on their forehead.

Travelers also claim that the sounds of mechanisms are heard in the caves, sometimes human groans, and sometimes screams.

The explanation for this, according to one theory, may be that there is an underground UFO base inside Mount Shasta. Because, according to reports, unidentified flying objects enter and exit this mystical mountain, and other theorists also support this line of thought, saying that Mount Shasta, like many other volcanoes, contains the energy needed to charge UFOs.

Delving into the mysteries, an interesting story is that JC Brown, a British explorer hired by the mining company Lord Cowdray in England, claims to have entered the cave and found many different things, shields, gold and mummies.

JC Brown disappeared after he announced it and was never seen again. An unidentified source also claimed to have seen Bigfoot walking around the crashed UFO at the same time they witnessed the UFO sighting near Mount Shasta.

Bigfoot seems to have a strong connection to UFOs, which is why theorists think Bigfoot might be an alien experiment and that they might be living in nearby caves. There are many caves on Mount Shasta that could be the perfect hideout for such a bigfoot community.

There were 3 witnesses of bigfoot on Mt. Shasta. Beakfoot was sitting in a tall tree when three campers spotted the creature. The creature jumped off and frightened the vacationers so much that they, having thrown all their belongings, rushed to their car.

With all the paranormal activity seen on this mountain, it’s no surprise that it attracts “weird people” from druids to Wicca ritual groups. In the 1960s, for example, thousands of hippies flocked to this sacred mountain to connect with cosmic beings and merge with nature.

Many New Age groups also considered the mountain to be a holy place. Beneath the mountain was said to be an ancient city called Telos, where people from the ancient lost continent of Lemuria (also known as Mu) settled after Lemuria was destroyed. It is said that they still live under the mountain.

This story lives on to this day, and they claim that these beings are sometimes physical people, and sometimes live on another plane of existence, perhaps as beings of other dimensions. However, the story of Telos actually comes from the fictional novel The Inhabitant of Two Planets, written in the 1800s by author Oliver Frederick Spencer.

Decades later, in the 1930s, a secret society known as the Rosicrucians also popularized the belief that advanced Lemurians lived under Mount Shasta. One such Rosicrucian was Paul Dale Roberts.

When his group was doing research on Mount Shasta, one of his psychics told him to take a picture of her, she felt something nearby. When he looked at the photo, he saw a silver UFO disk tilted in the sky behind it.

In any case, it is absolutely certain that there are too many inexplicable things and mysteries on and around Mount Shasta, so there must be something out of this world.

In this article:Lemuria, Mount Shasta