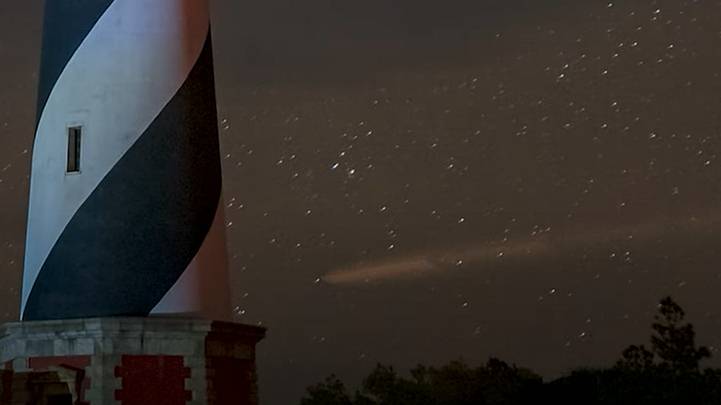 A heated debate has erupted on social media over a video that appears to show an unidentified flying object over the Outer Banks, a chain of islands off the North Carolina coast, which has a long history of strange sightings.

It looks a lot like a meteor, but photographer Wes Snyder says it’s only because he sped up the video. “The object was visible for just under 3 minutes in total, so I doubt it is a meteor, (or) a shooting star, as they normally only last a few seconds,” he said.

The object also appears to have corners in some of the speed camera photos (timelapse).

Snyder, who is well known in the Carolinas for coastal photography, shared the video on Facebook and YouTube hoping for sensible explanations. The result has been more than 300 comments, 600 actions and 1,500 reactions. The video was recorded around 10:30 p.m. on January 7.

“I spent one night at the Cape Hatteras Lighthouse taking fast-motion photos to create a next video. As I looked at my images I realized there was something in the video that I couldn’t explain, ”he wrote on Facebook. “It is much larger than a typical airplane looks like and it moves much faster than clouds.”

The photographer points out that the best explanation is that it could be “space junk” or a “burning satellite in the atmosphere.”

Facebook commenters seem to agree that it’s probably not a meteor or a shooting star. Some say it is clearly something “alien”, while others suggest something more ghostly, linked to the thousands of sailors who died in the Outer Banks shipwrecks.

That area is sacred ground. I’ve always felt like this: the Atlantic Cemetery, ”a woman posted on Facebook.

“I’ve seen a lot of strange things on the coast at night,” wrote another commenter.

“A space ship. Forced landing of aliens. There is no other possible explanation,” one woman guessed.

The North Carolina coast is well known for reports of UFO sightings. Large segments of the Outer Banks are undeveloped and the lack of light pollution allows for prolonged viewing of the night sky. Add to that the ocean that reflects the light, you have a perfect mix for strange sightings.

One of the most impressive on record took place a couple of years ago, when passengers on a ferry spotted and filmed a flotilla of lights over the ocean.

Experts believe that some of the alleged UFOs reported off the coast were actually military exercises, often employing a combination of aircraft and flares. Others may have been the elaborate lights on the fishing trawlers, experts say.

Some commenting on Snyder’s video speculate that it could have been a military craft, such as a US Coast Guard helicopter.

“I am happy to see so many responses, as it validates that I am not crazy and that I captured something unique,” Snyder told McClatchy News.

I’ve seen tons of planes, meteors, shooting stars, satellites in my timelapses before and this just isn’t like anything I’ve ever seen. I thought and hoped the online community would give me some better ideas of what it could be and it has been fascinating to see all the guesswork and answers. I always love when I capture something that I cannot explain, “he concluded.

Advertisement. Scroll to continue reading.
In this article:Outer Banks,space junk