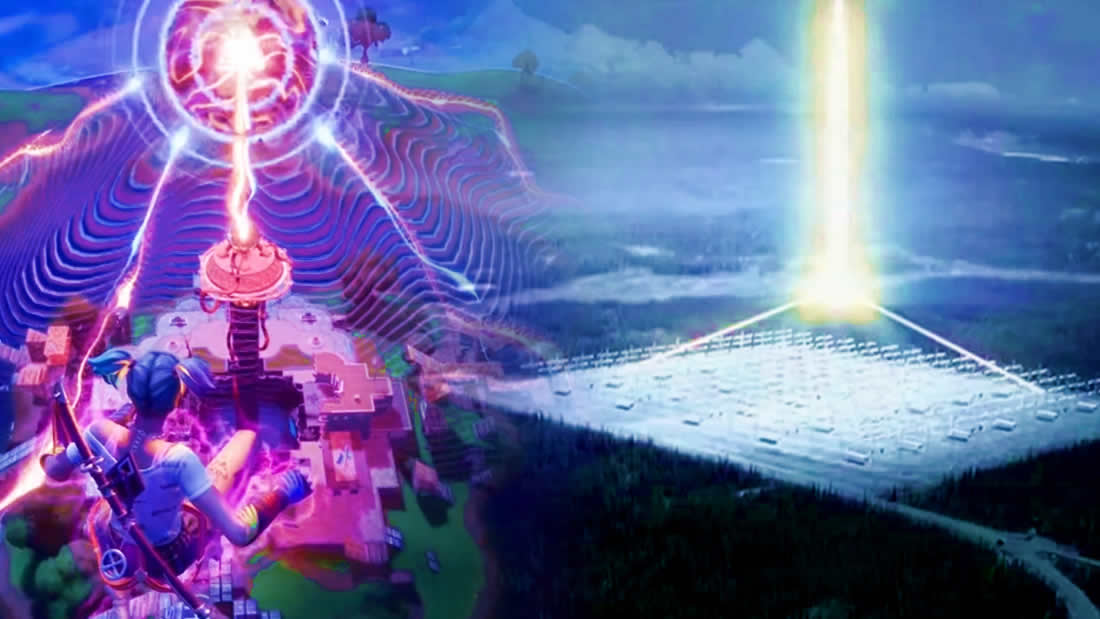 Some may wonder what relevance this may have, but it turns out that Fortnite is a game that is part of the daily lives of millions of people in this world, which automatically makes it important in our present.

A few days ago the last event that took place Epic Games in Fortnite.

It’s kind of funny to see how, since the new Fortnite chapter, events have a fairly dense load of messages and symbols that we could extrapolate.

The last event preceded the change of season, and did it as follows:

We can see how a machinery appears from the center of the map, which interacts with the storm, which is the one that delimits the safe areas at each moment of the game.

If we look both at the function of the machinery, and at the shape of the rays it emits, we can see an evident similarity with HAARP.

HAARP is a technology capable of modifying certain characteristics of the climate. Its existence is real, but it has never been officially detailed that it has been used, since the ethical part of science, because controlling the climate is something that can affect very large territories, and therefore, many people.

However, there are many occasions when its use has been suspected due to certain weather events that are not attributed a logical cause.

In this Fortnite event, we can see how this machinery is used to control the weather.

In the same event, after trying to modify the environment with said machine, something goes wrong, and a huge Tsunami appears that surrounds the entire map.

There are several people, many of whom are from the scientific community, who have given their opinion on how the use of geoengineering It could cause natural disasters as a side effect.

Even so, this opens the next door for us:

It turns out that in this game, which is currently the most popular game in the world, they always resort to natural disasters for many of their events.

The last events of the previous chapter of Fortnite, had as protagonist the fall of a meteorite, something that, at present, is considered as something more possible than ever, due to different information that has come to light by various authors.

And to this we must add a very interesting detail:

One would think that the developers of this game do not put this type of symbology in his game, and that is a mere coincidence, but there is something that indicates the opposite. If we look at the map of the new chapter, in its beginning, we can see something quite revealing:

Its resemblance to an ancient map that symbolized the mythical land of Hyperborean which was later blamed on Biblical Eden, is truly remarkable, with the island in the center, and its four rivers.

As you can see, Epic games, the developer of this game, plays with a lot of information which they provide dropper.

Advertisement. Scroll to continue reading.
In this article:Fortnite, HAARP