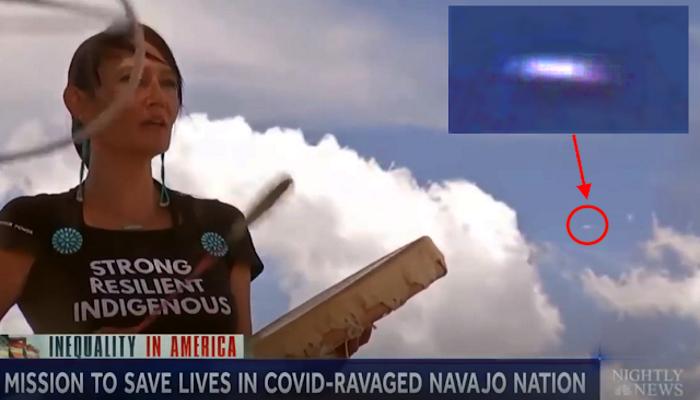 A mysterious object that appeared during an NBC News report about a water crisis in the Navajo Nation has taken social media users by surprise.

It arises at the end of the report when the cameraman was focusing on a woman who was playing a drum and singing.

The cigar-shaped UFO suddenly appears through the clouds and then crosses the blue sky to disappear among the other nimbus.

The video was shared by the Hidden Underbelly 2.0 YouTube channel dedicated to UFOs and other sightings.

According to the description of the video, the sighting was reported to the Mutual UFO Network (MUFON), an American non-profit organization that investigates cases of UFO sightings.

And unsurprisingly, the images have caused quite a stir on social media, with some users saying the object is trying to blend in with the clouds.

There were also those who explained that UFO sightings are very common in the Nation Navajo.

However, the most skeptical suggested that the UFO was simply a plane that looked like an alien craft because it was so far away from the camera.

But the truth is that this strange object appears frequently in the skies of different cities in the United States, and even witnesses claim to have seen it in other parts of the world, including in Europe and South America, where it had an unusual color.

So far there has been no official explanation of the UFO, neither by NBC, nor local authorities, nor meteorologists.

For what so far it continues to be an unidentified flying object soaring through the skies of the Navajo people and during one of the worst droughts in recent decades.

Hopefully their rituals and prayers take effect, and either with divine help or from other worlds, get the water they so badly need.

What do you think about the mysterious Navajo Nation object? Is it a UFO hiding in the clouds? Watch the following video and leave us your comment below.

In this article:cigar-shaped UFO, NBC News