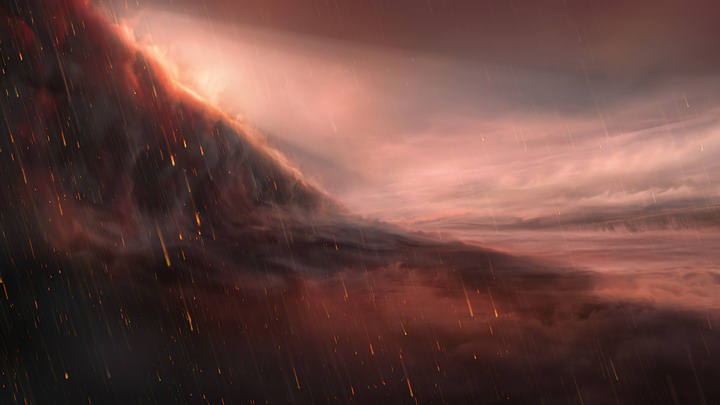 Scientists have discovered a brutal exoplanet. Its atmosphere is so rich in iron that this element literally rains from the sky.

This illustration shows a night view of the exoplanet WASP-76b.

Using ESO’s Very Large Telescope (VLT), a team of researchers has observed an extreme planet where they suspect it is raining iron. The ultra-hot giant exoplanet has a daytime side where 2400 degrees Celsius is exceeded, a temperature high enough to vaporize metals. Strong winds carry the iron vapor to the colder night side, where it condenses into drops of iron.

“It could be said that this planet becomes rainy at night, except for the fact that it rains iron,” says David Ehrenreich, professor at the University of Geneva (Switzerland), who has led a study on this exotic exoplanet published in the magazine Nature. Known as WASP-76b, it is found about 640 light-years away, in the constellation Pisces.

This strange phenomenon takes place because the planet where “it rains iron” only shows a face, its day side, to its mother star; its cooler night side remains in perpetual darkness. Like the Moon in its orbit around Earth, WASP-76b has a “tidal coupling”: it takes as long to rotate around its axis as it does to turn the star.

On its daytime side it receives thousands of times more radiation from its parent star than Earth from the Sun. It is so hot that the molecules separate into atoms and metals like iron evaporate into the atmosphere. The extreme temperature difference between the day and night sides leads to strong winds that carry iron vapor from the ultra-hot day side to the cooler night side, where temperatures drop to around 1,500 degrees Celsius.

According to the new study, WASP-76b not only has different temperatures on its day and night sides, but it also has a different chemistry.

Using the new ESPRESSO instrument, installed on ESO’s VLT in the Chilean Atacama Desert, astronomers for the first time identified chemical variations on an ultra-hot gas giant planet. They detected a strong iron vapor signature in the area that separates the day side of the planet from its night side. 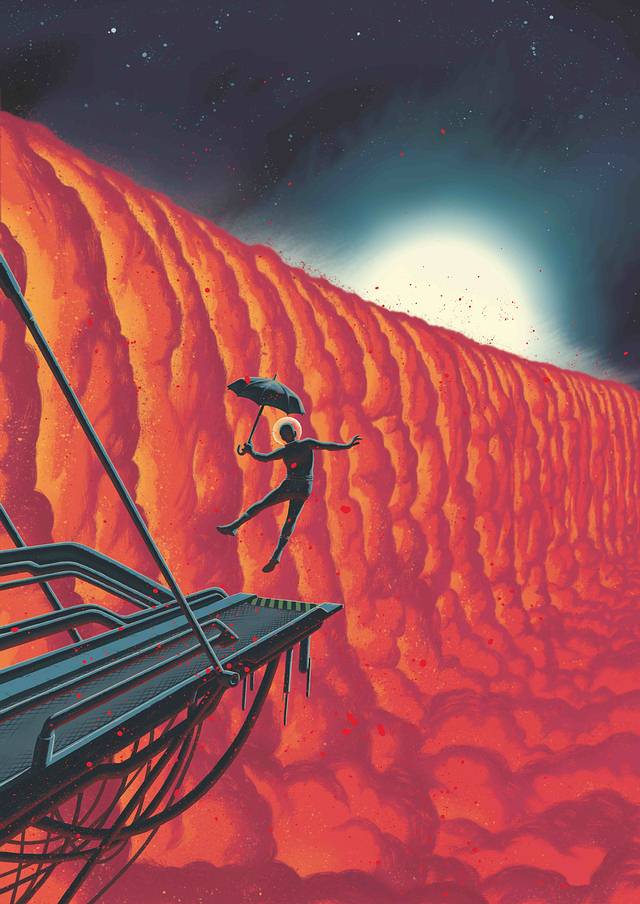 This comic illustration by Swiss graphic novelist Frederik Peeters shows a close-up view of the day-night border on exoplanet WASP-76b. Theoretical studies show that a planet like this, with an extremely hot day side and a colder night side, would have a gigantic condensation front in the form of a cascade of clouds in the transition zone from day to night, as shows here.

“Surprisingly, however, we don’t see the iron steam in the morning,” says Ehrenreich. The reason, he says, is that “iron is raining on the night side of this extreme exoplanet.”

“Observations show that, in the atmosphere on the hot and diurnal side of WASP-76b, iron vapor is abundant,” adds María Rosa Zapatero Osorio, astrophysicist at the Madrid Astrobiology Center (Spain) who heads the ESPRESSO scientific team. “A fraction of this iron is injected into the night side due to rotation of the planet and atmospheric winds. There, the iron meets much colder environments, it condenses and falls as rain.

This result was obtained from the first scientific observations made with ESPRESSO, in September 2018, by the scientific consortium that built the instrument: a team from Portugal, Italy, Switzerland, Spain and ESO.

“We soon realized that the remarkable light collecting capacity of the VLT and the extreme stability of ESPRESSO made it a first-rate machine for studying exoplanet atmospheres,” says Pedro Figueira, scientist at ESO’s ESPRESSO instrument in Chile.

“What we have now is a whole new way to track the climate of the most extreme exoplanets,” concludes Ehrenreich.

In this article:exoplanets, iron rain