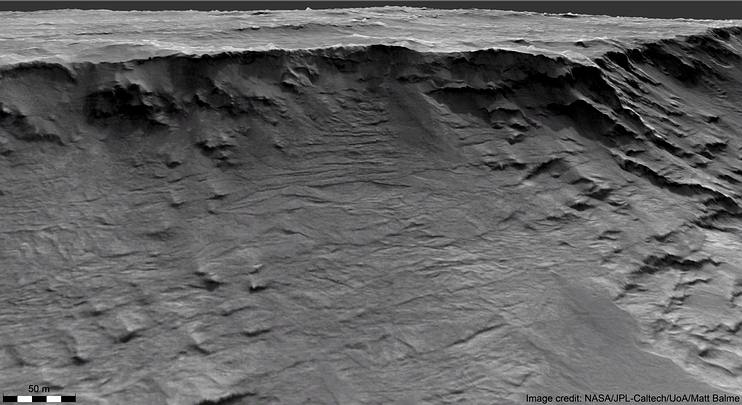 New highly detailed images of rocks located on Mars revealed evidence of the existence of rivers for more than 100,000 years on the planet 3.7 billion years ago.

An international team of researchers from Italy, the United Kingdom, France and the Netherlands used high-resolution images captured by the HiRISE camera of NASA’s Mars Reconnaissance Orbiter to study an edge of the Hellas Planitia plain in the red planet’s southern hemisphere.

The Hellas impact crater has long been of interest to researchers because it is one of the largest in the solar system, stretching about 9 kilometers from the crater’s base to the rim.

Scientists focused on a rocky cliff, about 200 meters high and dating to 3.7 billion years ago. Composed of sediments accumulated over time, these rocks are like those found on Earth and formed by rivers.

“The cliffs located on Mars reveal rivers that continually changed their ravines, creating sandbanks, similar to the Rhine river or to those found in northern Italy,” reads the study, published in the magazine. Nature Communications.

“It is not like reading a newspaper, but the high resolution images allowed us to” read “the rocks as if we were very close to the cliff,” said Francesco Salese, one of the authors of the study and a geologist at the University of Utrecht. “Unfortunately, we don’t have the ability to scale, to look at the details on a finer scale, but the striking similarities to the sedimentary rocks on Earth leave very little to the imagination.”

By analyzing the layers of rocks on Mars, the researchers were able to determine that the channels were around 3 meters deep. This analysis can give more information about its evolution, similar to how geologists used the sediment layers on Earth to understand how our planet changed over time and visualize what it was like millions and billions of years ago.

In this article:Hellas impact crater, Rivers On Mars