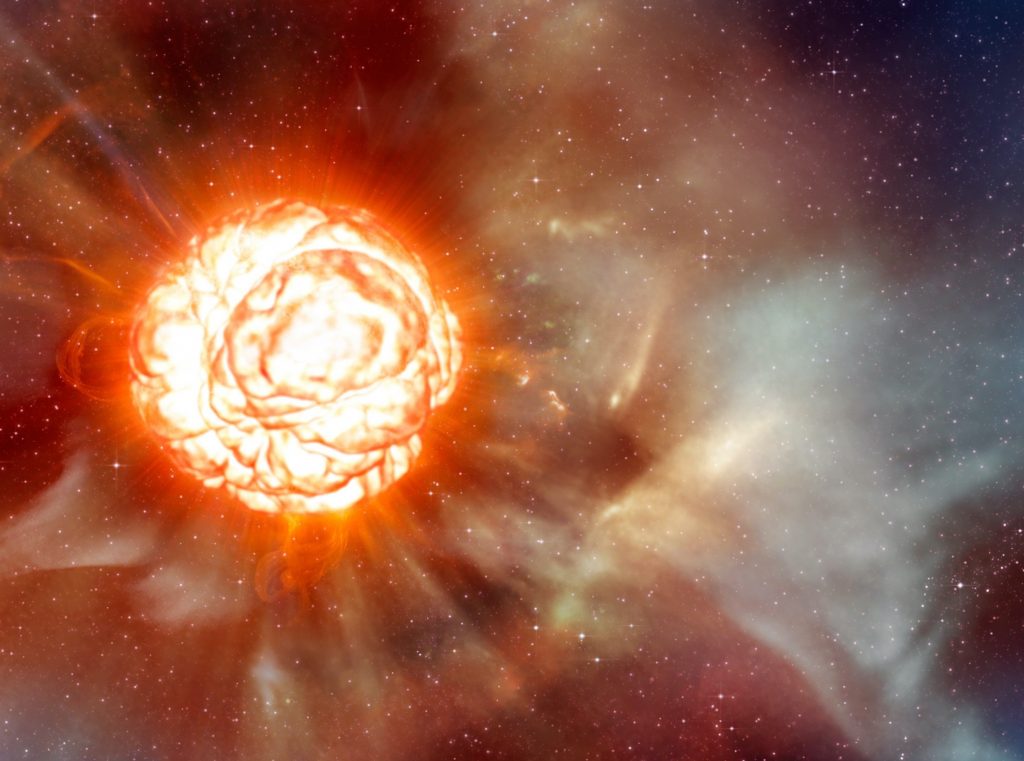 Recently, the media has often discussed the prospect of becoming a supernova of one of the brightest stars in the sky – Betelgeuse. Rumor has it that it will explode almost from day to day and that this will greatly affect our world. Should such panic statements be believed? 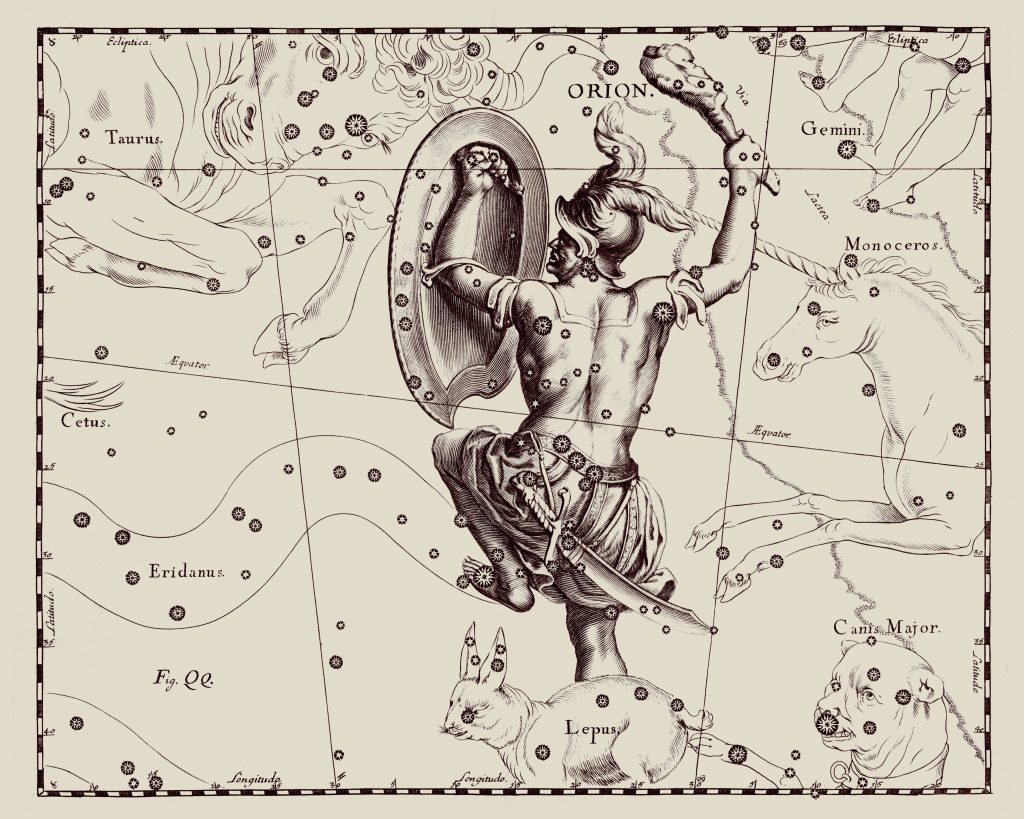 The constellation Orion in the atlas of Jan Hevelius in 1690

Betelgeuse in Arabic means “giant armpit.” Alpha Orion bears this name, although it is inferior in brightness to Rigel, a beta star in the same constellation. Thanks to the reddish hue, Betelgeuse attracted the attention of many astronomers in the pre-telescopic era. For example, Claudius Ptolemy, a late Hellenic scientist who created a geocentric model of the world, wrote about it.

It is interesting that the ancient Chinese astronomers who observed Betelgeuse three centuries before Ptolemy, reported in their writings about the yellow color of the star. If you believe their records, it turns out that she recently (by the standards of space, of course) was in the phase of the yellow supergiant – intermediate between the phases of the blue and red supergiant. 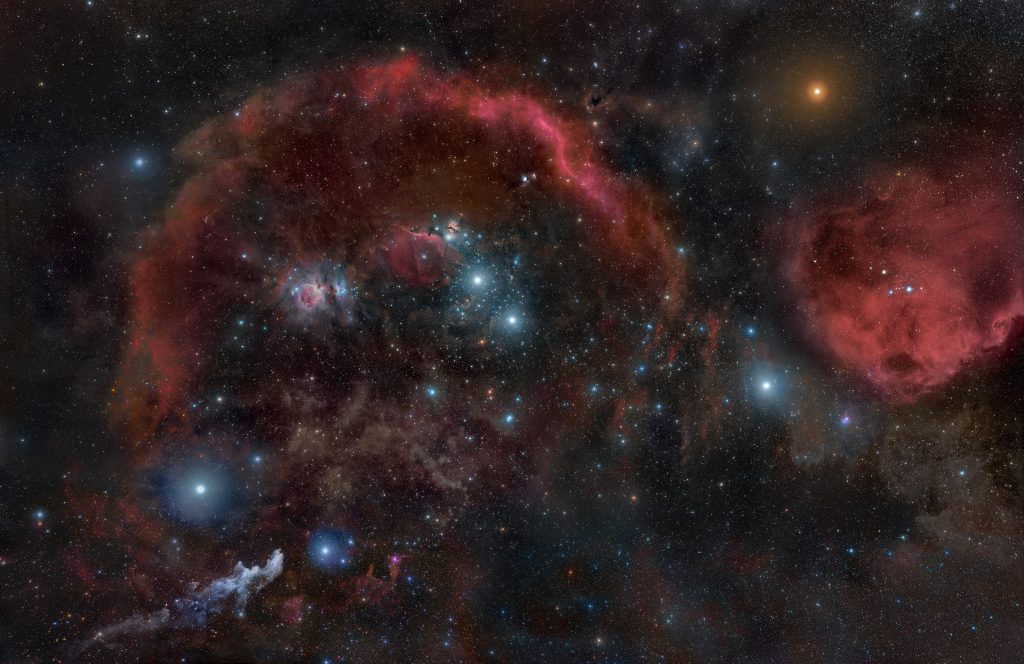 The English astronomer Sir John Herschel noted that in the period from 1836 to 1840 the brightness of Betelgeuse changed greatly. In October 1837 and in November 1839, the star even “eclipsed” Rigel. Then ten years of relative peace followed, and in 1849 Herschel recorded the beginning of another cycle of changes – in 1852 Betelgeuse’s brightness again reached its maximum. As a result of observations, she was attributed to the number of “semi-regular” variable stars.

More advanced astronomical instruments helped establish the distance to Betelgeuse and its size. It turned out that it is located about 700 light years from us and is a thousand times larger than the Sun in radius: if the star were in our system, its shell would extend to the orbit of Jupiter. Nevertheless, due to the “variability” of the star, it is not yet possible to precisely determine its physical characteristics, scientists continue to work in this direction. 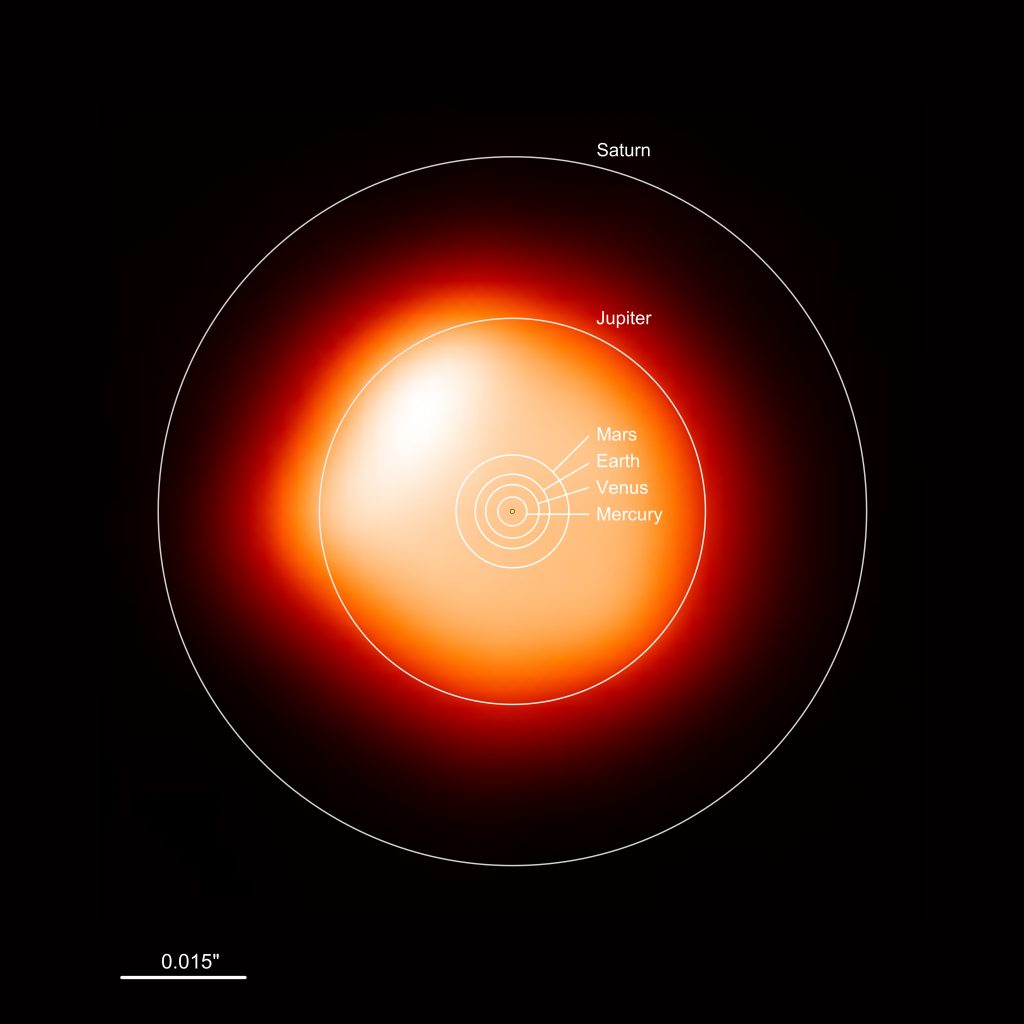 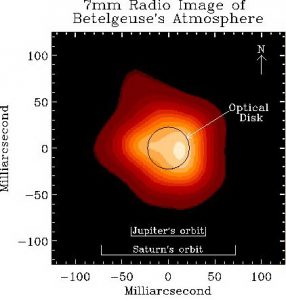 Radio Betelgeuse image received in 1998. It reflects the size of the star’s photosphere (circle) and the effect of convection processes on its atmosphere (images.nrao.edu)

Using modern methods of observation, it was possible to find out that there are bright spots on the radiating layer of the starry atmosphere (photosphere) of Betelgeuse. The first detailed images confirmed Martin Schwarzschild’s theory of the existence of huge convective zones on the surface of red supergiants, where, due to active mixing of matter, the energy transfers from the inner layers to the outer ones.

The biggest question today is that between 1993 and 2009, the Betelgeuse radius decreased by 15% without a decrease in luminosity. This was recorded as a result of many parallel observations. There is no comprehensive explanation for what is happening. Scientists suggest that this is an apparent contraction due to active processes in the outer shell of the star.

In July 2009, with the help of the Very Large Telescope, astronomers obtained Betelgeuse images, which showed a giant plume of gas. The “tail” extended to 30 astronomical units – this is the distance from the Sun to Neptune. Its presence once again proves that changes in the appearance of Betelgeuse can be associated not only with the processes inside the star, but also with the evolution of gas and dust formations near it. 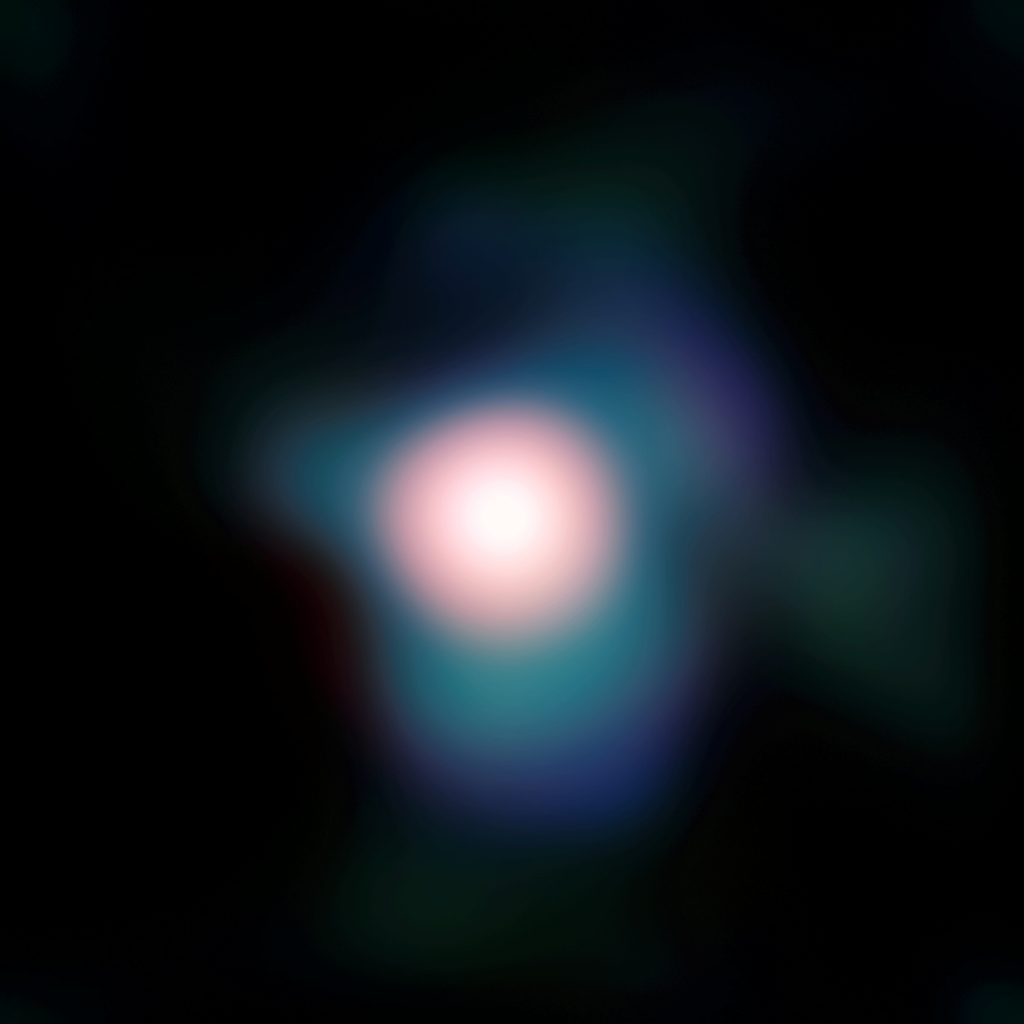 An image of Betelgeuse obtained in 2009 using the Very Large Telescope. The gas tail is clearly visible here (eso.org)

Betelgeuse is often mentioned in science fiction. For example, it became the goal of space travel in the novel by Gerard Klein “Star Gambit” (1958) and Pierre Boule “Planet of the Apes” (1963). The imagination of science fiction fuels the inevitability of the explosion of the red supergiant. The stories of Robert Chase “Betelgeuse Transit” (1990) and “Endeavor” (2005) describe a rescue expedition to one of the planets of the Betelgeuse system, on which the colonists remained, before a star burst. In Robert Sawyer’s novel “Calculation of God” (2001), the threat of the death of inhabited worlds due to the transformation of Betelgeuse into a supernova forces the Creator to reveal a miracle and thereby confirm his existence.

Gradually, the expectations of science fiction writers migrated to para-scientific literature, and from there – to the pages of the “yellow” press. Later they became the basis of catastrophic scenarios.

The first wave of panic in the information space was provoked by the publication in 2009 that, according to astronomers, the radius of the star decreases. They very “successfully” overlapped with the expectation of the end of the world according to the Mayan calendar, which was supposed to come on December 21, 2012. Conspiracy therapists and clairvoyants of all stripes tried to convince the public that it was the Betelgeuse explosion that would destroy our planet. In December 2011, scientists from NASA in a separate press release debunked all these myths. 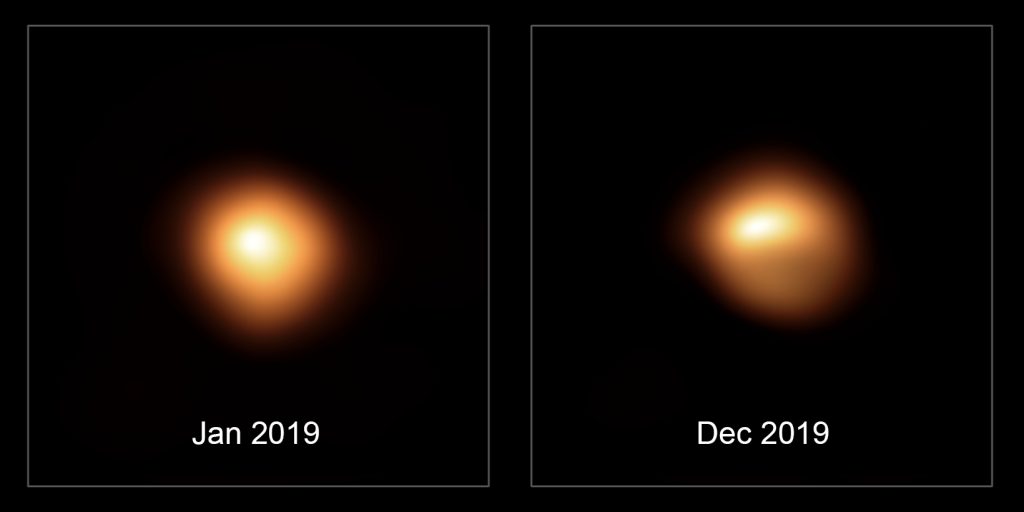 Talk of an impending explosion resumed two months ago. They are due to the fact that Betelgeuse faded from last October two and a half times – up to +1.61 magnitude (usually its apparent magnitude fluctuates around the value of +0.5). In December, journalists began writing that the observed phenomenon could be related to the transformation of a star into a supernova, however, scientists are more cautious in their forecasts.

One way or another, Betelgeuse again attracted attention, and now astronomers are constantly observing its luminosity. On February 22, American scientists reported that the brightness of the star had stabilized and was slowly starting to grow: on February 20, it rose to +1.556 magnitude. The end of the world is canceled!

So if the star explodes, how terrible will the consequences be? Scientists have long calculated that a supernova located at a distance of less than 25 light years would be a danger to us. Betelgeuse is located much, much further. Of course, the flash will be clearly visible – at maximum, Betelgeuse’s brightness will become comparable to the lunar (ie –12 magnitude). However, this radiation does not threaten life on Earth, just another beautiful star will appear in the sky for some time.

The substance that the supernova will throw into the surrounding space will reach us only after six million years, while it will be extremely dispersed, and a weak solar shock will absorb the weak shock wave. Betelgeuse after the explosion will remain a compact neutron star. This will probably happen within the next hundred thousand years, but certainly not tomorrow.

Advertisement. Scroll to continue reading.
In this article:Alpha Orion, Betelgeuse