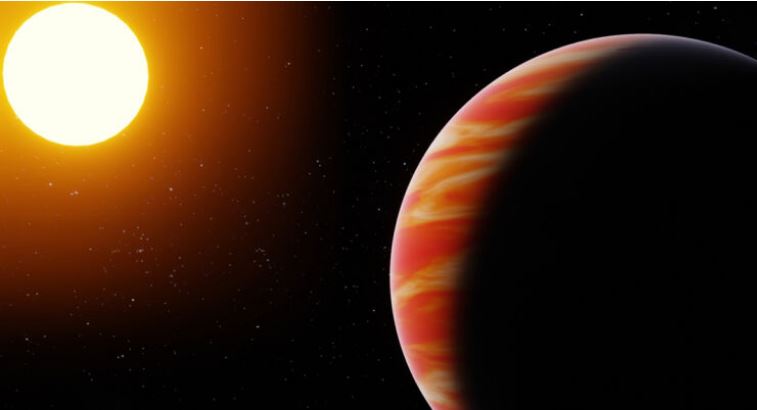 Artistic illustration of the planet LTT 9779b

A team of astronomers from the University of Kansas (KU) has found evidence of an atmosphere around an extremely hot exoplanet – and it shouldn’t exist, they say.

The exoplanet is a “hot Neptune”, a giant planet with a mass similar to Uranus or Neptune, which orbits so close to its star that its surface is exposed to large amounts of radiation. In general, these types of planets end up being much hotter than Neptune.

But there is something unusual about this one, dubbed LTT 9779b and located about 260 light years away. When analyzing data from the space telescope TESS and NASA’s Spitzer, they found that the planet had an atmosphere – despite its scorching temperature.

Ian Crossfield, assistant professor of physics and astronomy at KU and lead author of the article published in the magazine Astrophysical Journal Letters, said in an announcement:

For the first time, we measure the light that comes from this planet that should not exist.

This planet is so intensely irradiated by its star that its temperature is over 1,600 degrees Celsius and its atmosphere could have completely evaporated. Still, our observations of Spitzer show us its atmosphere through the infrared light that the planet emits.

Despite the existence of an atmosphere, LTT 9779b would be a horrible place to live.

This planet has no solid surface and is much hotter than Mercury in our solar system – not only would lead melt in this planet’s atmosphere, but also platinum, chromium and stainless steel.

A year on this planet lasts less than 24 hours – that’s how fast it revolves around its star. It is a very extreme system.

But it is not as hot as other exoplanets of its kind.

The study’s co-author, Nicolas Cowan of the Exoplanet Research Institute (iREx) and McGill University of Montreal, said in the statement:

The planet is much colder than we expected, which suggests that it’s reflecting a lot of the incident starlight that hits it, probably due to daytime clouds,

The discovery made the team enthusiastic about future research.

I wouldn’t say that we understand everything about this planet now, but we have already measured enough to know that this will be a really fruitful object for future studies.

Although it can be extremely inhospitable, research can lead us to locate other, much more hospitable places in the universe.

If anyone is going to believe what astronomers say about finding signs of life or oxygen in other worlds, we are going to have to show that we can really get things done right first. In that sense, these bigger and hotter planets like LTT 9779b act like training wheels and show that we really know what we’re doing and we can get everything right.

Advertisement. Scroll to continue reading.
In this article:exoplanets, LTT 9779b