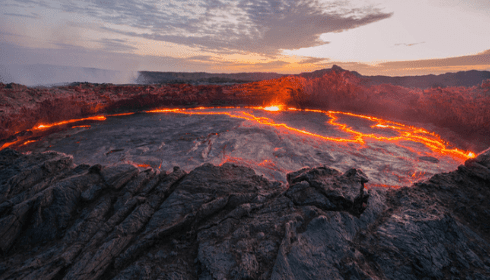 At the end of December 2019, all over the southern coast of the Mediterranean Sea (Egypt, Algeria, Libya), people heard wild sounds coming from the sea:

Nobody understands what it is, but the “academics” said that they are ‘whales’. And so, after a couple of weeks, the sound migrated a little, changed the tone and the whales scream now like this:

This video is from Morocco, posted on January 7th. The author does not report on which shore it is recorded, but it does not have much significance, since it is already clear that this is not a whale, but just some leviathan.

And here is Yemen, January the 7th:

Another video shot in one of the Arab countries (the exact location is not indicated, but the videos on the channel are either in English or in Arabic):

In general, the ‘whale sounds’ are kind of strange and it seems that they swim not in the sea, but in the mantle. Or even in the planetary core.

With the development of computer technology and the advent of seismic tomography, which makes it possible to build a model of the Earth in sections, geologists have discovered the so-called Large areas with a low shear rate ( Large low-shear-velocity provinces, LLSVP) These are mountain-like structures in the lower part of the Earth’s mantle, adjacent to the outer core of the planet.

All that is known about them is that LLSVPs are regions with a higher temperature, moreover, consisting of some special, very ancient breed. January 11, 2011 Quanta magazine posted on LLSVPs a hefty article written by a group of geologists who are engaged exclusively in this topic.

As one would expect, they do not know what LLSVPs are, but they express a suspicion that these structures are the roots of ALL mantle plumes. One root is located under the Pacific Ocean, the second under Africa and above, they are already branching out into hot spots. It is impossible to trace this using modern methods, no tomography can see the sources of mantle plumes, however, the minerals emitted by the volcanoes are very similar and, as the authors of the article think, they all come from there.

We don’t know how true this theory is, because, as people of very broad views, we are ready to assume that the Earth is generally flat and artificial, but if geologists are right about the LLSVPs, then … Nature loves symmetry.

So, if the Pacific Ring of Fire has gone crazy in recent years, then it is time to activate the second area with a low shear rate, which lies under Africa. It can be Canaries, maybe Italy, Mayotte – there are many potential places. Therefore, all these wild sounds now observed in the region can have a global underground cause – the mantle is ready to crack and makes lithospheric plates vibrate.

Whether a new supervolcano will appear in the African region, we don’t know for sure, but, as Breaking Israel News wrote-hey are slightly alarmed by the fact that three volcanoes,in three separate parts of the world, became active in just three days. Therefore, the BNI Editorial Board did not seek advice from enlightened adherents who never know anything and do not really predict, but to the rabbi Nir Ben Artzi, who is highly regarded as a forecaster and has crowds of followers.

And the rabbi said that volcanoes are directly mentioned by the prophets as an instrument of the End of Times: preparing the world by burning away impurities as a crucible is used in metallurgy to purify metal. So, awakened volcanoes will burn all bad ones in magma.

We can not add anything to the rabbi’s prophecy, as well as to the team of geologists from Quanta Magazine, but as they write: if at least one LLSVP area is completely emptied, it will flood the planet’s surface with a mantle layer of 100 kilometers. We believe that such a ticker to bring the planet into agreement will be enough, so we follow the development of events.

In this article:End of Times, Pacific Ring of Fire