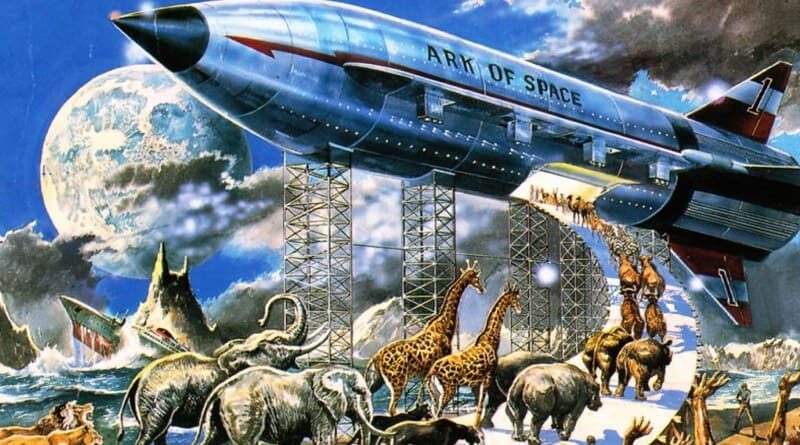 From a strange birth to his Ark, Noah’s story has many details that are out of this world! Was Noah’s Ark a DNA bank?

Before the Ark, we must begin with the archaeological discoveries about the great flood. The researchers speculated that rising ocean levels could have caused the Mediterranean Sea to burst into a natural dam, creating a flood so large that it submerged approximately 93,000 square kilometers under 150 meters of water.

And, in fact, traditional archaeologists know that there are more than 200 known sunken cities in the Mediterranean. Even those cities were flooded in some way at the same time that the Black Sea was flooded.

Written in the book of Genesis, the story of Noah tells how God “saw that the evil of man was great” and decided to destroy all creation. Only Noah, his family and the animals on board the ark were able to survive and repopulate the planet. But is this whole story?

Among the ancient scrolls of the Dead Sea there are several stories that are not found in the traditional Hebrew Bible. One of these stories tells Noah and his strange and miraculous birth.

One of the Dead Sea scrolls is called “parchment of Lamech.” Who is Lamech? Lamec was a pastor.

One day, Lamech returns after a long period of absence and sees his pregnant wife. And he said:

“This is impossible. I haven’t been here for months. “

But his wife, called Bathenosh, swears: “No one touched me.”

Lamec did not believe his wife Bathenosh and went to see his father, who was Methuselah. Methuselah tells Lamec:

“I can’t help you. I don’t understand. I believe in your wife, Bathenosh, that nobody touched her, and I believe her. What am I supposed to do?“

Enoch tells Methuselah that the guardians of heaven made an artificial insemination in the womb of Bathenosh, his wife. And I should accept this child, because this child will be the father of a new human generation. And in the Bible, this is Noah.

What would happen if Lamech’s story were real and the guardians of heaven described in the story were, in fact, aliens? Does this mean that Noah was the product of artificial insemination, a genetic experiment conducted by aliens?

According to the Bible, God sent the flood because of man’s evil and corruption. But the flood can also be seen as a means to rid the Earth of biological imperfections.

Using Noah and his family, they could repopulate the planet with a genetically superior species. Part of this human society is, once again, genetically backward, closer to the animal. These humans were scattered on the planet.

Another familiar element in Noah’s story refers to the collection of animals brought aboard the ark. In the Bible, God commanded Noah to collect two of all types of living creatures: animals, birds and insects. But many biblical scholars and theologians agree that such a task would have been physically and biologically impossible. Could there be another more scientific explanation?

Could it be possible that Noah’s Ark was a misunderstood technology and that it was actually a DNA bank?

Has this technology somehow collected all living things, as in a DNA bank of some kind? It is hard to imagine to what extent this would have happened in the past, but if it did, it would have to be told as a story; The story of an ark that also acts as an extraterrestrial DNA bank.

Aliens also need plants, animals and minerals on the planet. Like when we go to Mars, we will use everything we can on that planet. So, even the aliens that come here could do the same.

And if they knew that a certain cataclysm is coming, they would also like to preserve certain types of animals and plants and create what we thought was Noah’s Ark.

But this is possible only if our modern advanced technologies were available many thousands of years ago. Maybe we should think about what Rabbi Ariel Bar Zadok said in a television program on aliens in antiquity:

“The Old Testament Flood was vital because the world before the Flood was very different from the world after it. There are legends around the world that in the “antediluvian times” there was a high-tech civilization, whose representatives maintained contact with creatures from the stars. But all this was lost due to environmental pollution. “