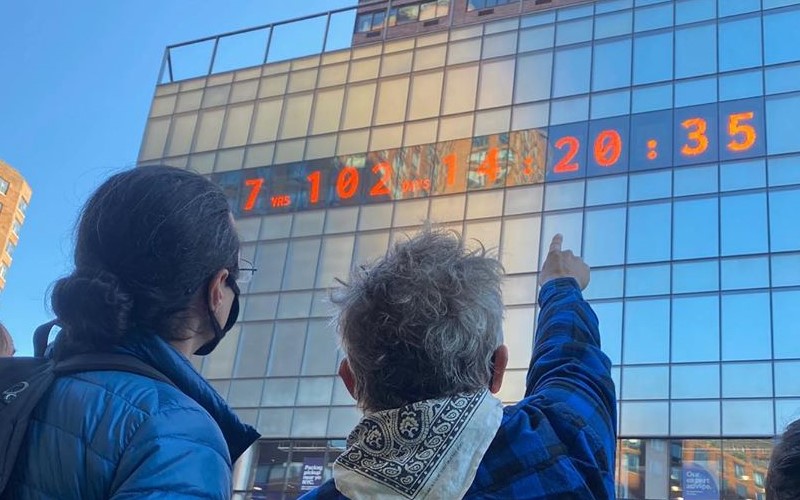 A team of artists and activists turned the famous digital clock in New York’s Union Square “The Passage” into a countdown to a deadline, showing how much time humanity has to take decisive action on climate change. It is called Climate Clock, which is the time left on Earth according to experts Led by artists Gan Golan and Andrew Boyd, the “Climate Clock” at Union Square follows the Mercator Research Institute’s Global Clons and Climate Change (MCC) climate clock methodology, which uses data from a recent Intergovernmental special report. Commission on Climate Change (IPCC) for global warming by 1.5 degrees Celsius. The Commission report states that, starting in 2018, a “budget” of 420 gigatons of carbon dioxide gives us a 67% chance of not exceeding the limit of 1.5 degrees Celsius.

The installation of the “Climate Clock” in Manhattan coincided with the Climate Week in New York and the project is, at the same time, a platform with free access that allows those who are worried to create their own climate clocks.

According to experts, the climate change is putting a strain on the Earth survival and its inhabitants, to such an extent that in New York, through Climate Clock, a graph to demonstrate the speed with which the planet is heading towards the path of no return, has already begun. The climate Clock it’s not new, in fact it appeared last year in Berlin, this year it’s up to the city of New York and next year in Paris.

The countdown on the display indicates the time remained at our planet for limiting carbon dioxide emissions before it comes to a point of no return.

To accompany the passage of time, the words “The Earth has a deadline” are on display. On the official website of the initiative, there is also a message aimed at raising awareness among the world population:

“Humanity has the power to add time, but only if we work collectively and measure our progress against well-defined goals“.

The latest expert reports are staggering

The countdown, which should run out in January 2028, i.e. The report made by the experts indicates an unprecedented climate crisis that is getting worse by the hour that must be stopped as soon as possible! The latest heat waves, devastating fires, floods and droughts. These challenges will only grow and the consequences of our failure to cope with the climate emergency are everywhere. But not only that, according to the report, the pact signed ten years ago, where 170 countries had committed themselves to achieving 20 objectives for the protection of diversity and ambient has failed. None of the 20 goals set have been achieved. Now is the case to take responsibility, and the picture at the moment, seems to be bleak

In this article:Climate Clock, January 2028