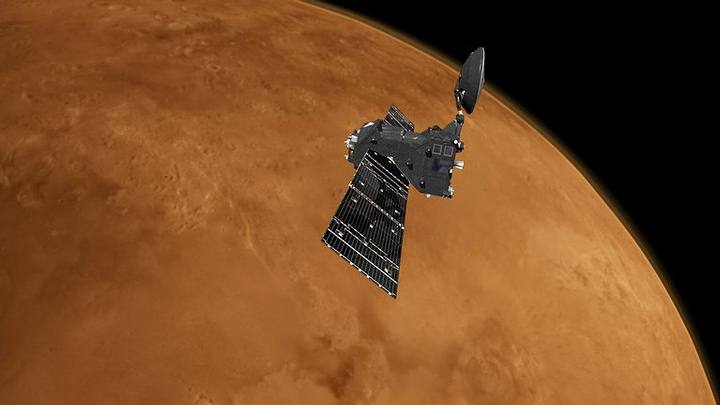 The TGO orbiter (Trace Gas Orbiter) of the ExoMars mission of the European Space Agency (ESA), has detected signatures of ozone and carbon dioxide in an unexpected place in the Martian atmosphere.

The TGO has been studying Mars from orbit for two years now. Their mission aims to understand the mixture of gases that make up the Martian atmosphere, with special focus on the mystery surrounding the presence of methane there – a gas associated with possible biological activity.

Now, and after a full year of observations with its atmospheric chemistry instrument (ACS), the spacecraft has identified two never-before-seen signatures: ozone (O3) and carbon dioxide (CO2). These findings are reported in two articles published today in Astronomy & Astrophysics, one led by Kevin Olsen from the University of Oxford, UK, and one by Alexander Trokhimovskiy from the Space Research Institute of the Russian Academy of Sciences in Moscow.

“These characteristics are both surprising and puzzling,” Olsen acknowledges. “Well, they are just above the wavelengths at which we expected to find the strongest methane footprints. Before this discovery, the CO2 characteristic was totally unknown, and this is the first time ozone has been identified on Mars in this portion of the infrared spectrum.” 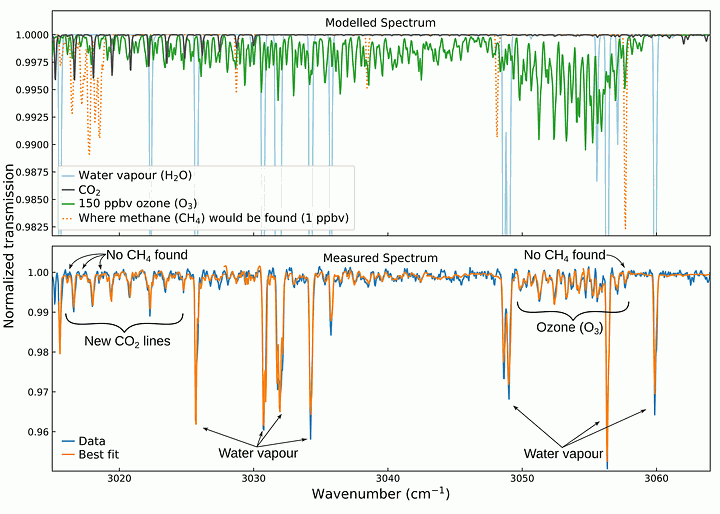 Spectral signatures of carbon dioxide and ozone detected by the TGO

The Martian atmosphere is dominated by CO2, which scientists observe to measure temperatures, track seasons, explore air circulation, and more. Ozone – which forms a layer in the upper atmosphere of both Mars and Earth – helps keep atmospheric chemistry stable. Ships like ESA’s Mars Express probe have detected CO2 and ozone, but the outstanding sensitivity of ACS aboard the TGO has made it possible to reveal new details about how these gases interact with light.

Observing ozone in the range where the TGO searches for methane is a result that no one anticipated.

Scientists have already mapped Martian ozone variations based on altitude before, however, they used methods that necessarily depended on gas signatures in the ultraviolet, a technique that only allows measurements to be made at high altitudes (at more than 20 kilometers above the surface).

Now, the new ACS results show that it is also possible to map Martian ozone in the infrared, so its behavior can be measured at lower altitudes to obtain a more detailed view of the role of this gas in the planet’s climate.

Revealing the mystery of methane

One of the main objectives of the TGO is to explore methane. To date, Martian methane signals – first detected by missions like ESA’s Mars Express in orbit and NASA’s Curiosity rover on the surface – are variable and somewhat puzzling.

Although it is also generated through geological processes, most of the methane on Earth is produced by living organisms, from bacteria to livestock and other human activities. For this reason, it is exciting to detect methane on other planets, especially since it is known that this gas decomposes after about 400 years, which implies that all the methane present must have been generated or released in the relatively recent past. 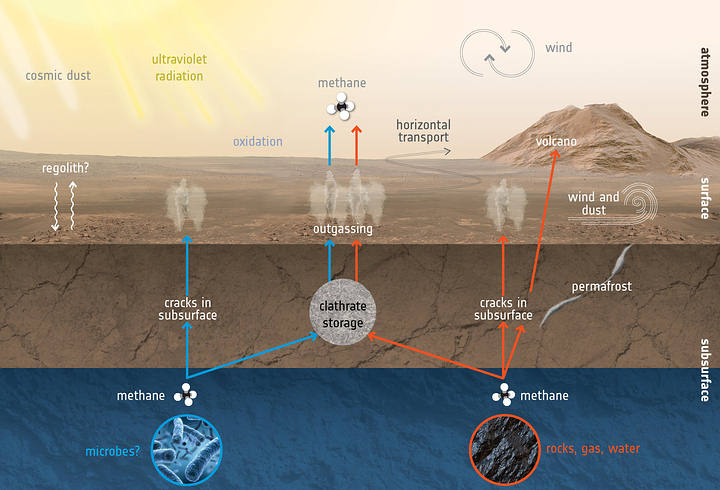 “Discovering an unforeseen CO2 footprint where we look for methane is significant,” says Trokhimovskiy. “Until now we have not taken this footprint into account and it is possible that it affected detections of small amounts of methane on Mars.”

Most of the observations analyzed by the team were made at times other than those shown by methane detections on Mars. Also, the TGO data doesn’t include large columns of methane, only small amounts, so right now there are no direct discrepancies between missions.

“In fact, we are actively working on coordinating measurements with other missions,” adds Olsen. “Rather than questioning the above statements, this finding serves to motivate all teams to look more closely: the more we know, the deeper and more precisely we can explore the Martian atmosphere.” 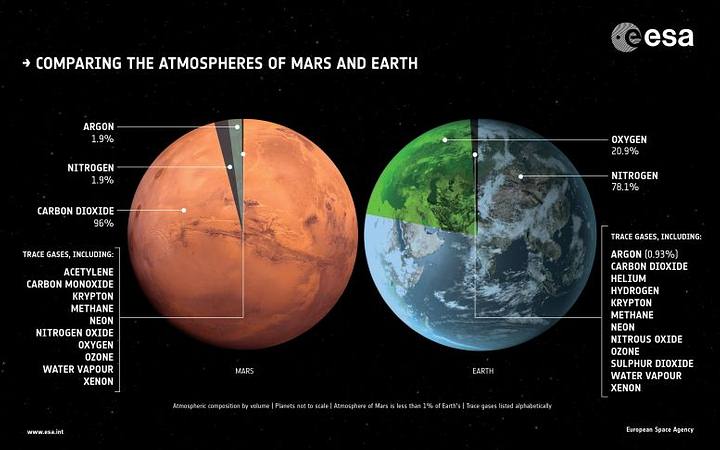 Comparison between the atmosphere of Mars and Earth

Finally, and beyond the mysterious methane, the findings underscore how much you can learn about Mars from the ExoMars program.

“They allow us to better understand our neighboring planet. Ozone and CO2 are important in the Martian atmosphere. If we do not take these gases into account properly, we run the risk of mischaracterizing the phenomena or properties that we see, “the researchers conclude.