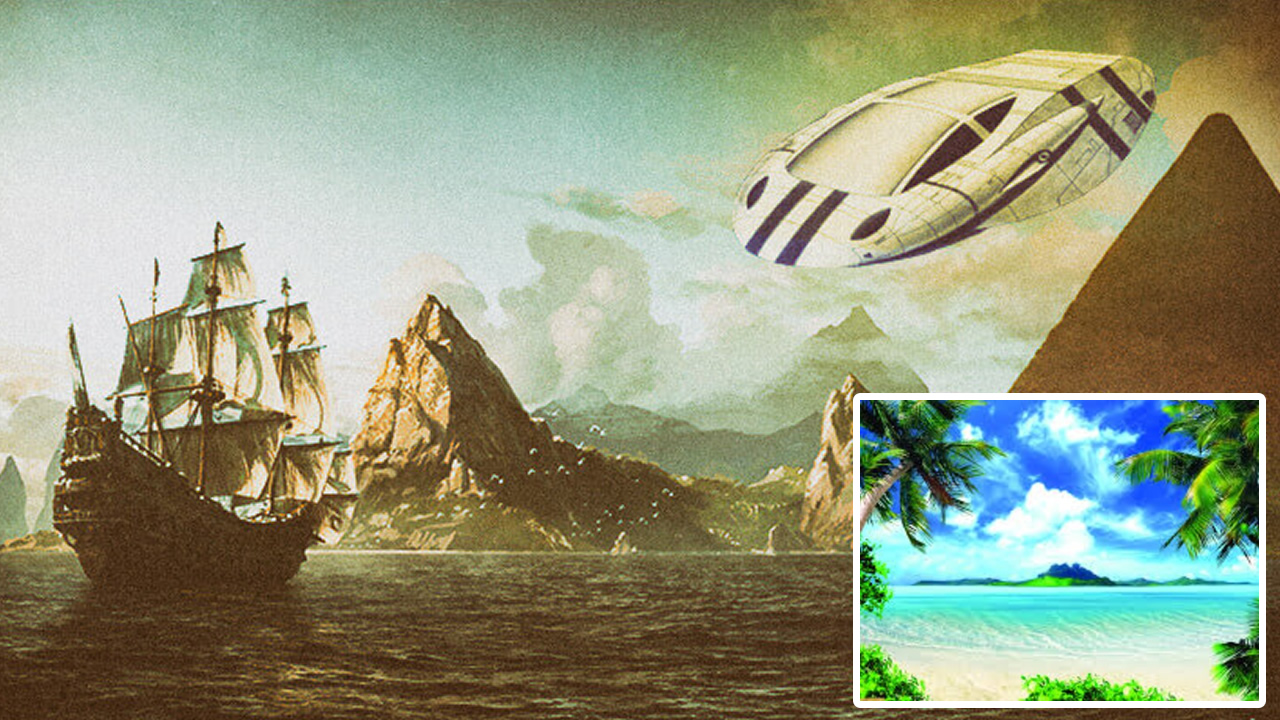 Evidence from our advanced ancestors is everywhere, but it is scattered and does not form an overall picture. To learn more about them, we must first look at the southernmost continent: Antarctica.

There is mounting evidence of civilizations with advanced capabilities that could travel around the world in the distant past. As history is being decoded, we discover that our “primitive ancestors” had the luxury of sailing around the world, enjoying freedom in their own right, and, above all, their actions far outweighed much of what we have accomplished. using modern techniques. Forgotten for a long time, these peoples not only possessed advanced knowledge and technology, but also lived in a different world than that represented by today’s history.

With the Antarctic ice sheet thinning every year, a number of peculiar formations have come to light. Rugged mountains with perfect symmetry that resemble pyramids have removed the dense layer of snow and are now insinuating that in the remote Antarctic past some forgotten peoples wandered through this now desolate region, and supposedly had free access to travel the entire planet, from one pole to the other.

Antarctica is a colossal layer of ice that covers more than 14 million square kilometers, covering 98% of its surface. To get a better picture, if you take Antarctica and map it over North America, it will stretch all the way from the southern tip of Texas to Canada’s northernmost islands. The massive ice sheet is estimated to be approximately 2.8 miles thick in some areas, while average temperatures are -55 ° C. 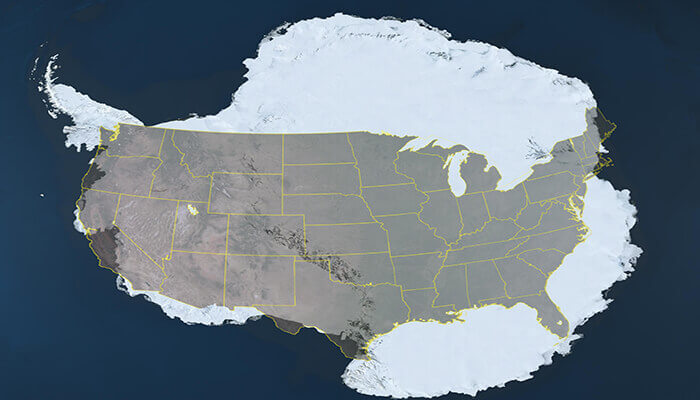 With Antarctica being the only completely uninhabited continent in the world, there seems to be nothing to see there other than the strong wind blowing, and some local animals. But is it really as bleak as they want us to believe? Or is there more than meets the eye?

It is worth mentioning that Antarctica was discovered (in our era) only in 1911, when the Norwegians finally reached the South Pole after a fight with the British. In advance, Captain James Cook and his crew had managed to reach the outskirts of this mysterious continent in 1773, when they discovered their nearby islands, but never reached the actual mass. It is now accepted that the South Pole had barely been reached in the early 20th century, and was called Ant-arctic-a due to the previous discovery of the North Pole with its arctic region.

After the Europeans arrived in this ancient and frozen land, they sent several expeditions to search for resources in the area. It is no hidden fact that the Nazis had a keen interest in the frozen desert, including the Americans under the leadership of Admiral Byrd, and many other groups and organizations throughout the years and until today. Much has been said about the secret bases that, presumably, are still hidden there, but that is the subject of another article.

After carefully analyzing the Antarctic surface, researchers have concluded that this desolate continent was once a tropical paradise. LO had everything from sunny beaches, warm waters, to a lush environment that covered all valleys and mountains. In the distant past, Antarctica was the perfect place to be around if you were an organic being that depended on heat and other stimuli. 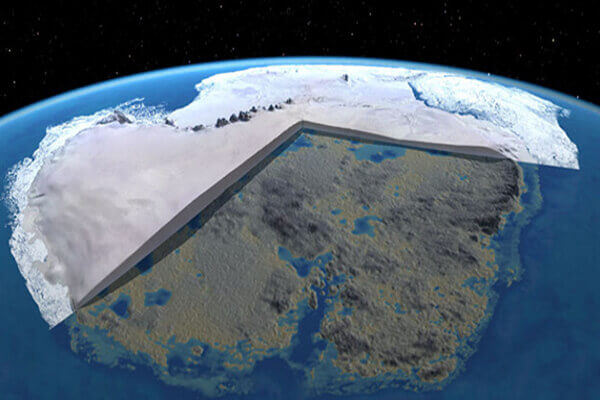 Why was this ancient piece of land with a tropical climate covered with ice?

However, today’s science once again alters certain things by claiming that such a period occurred tens of millions of years ago, and probably only furry mammals and other wildlife had the opportunity to enjoy this tropical paradise. For us humans, it remains what it is today, a frozen cold land inhabited by penguins and other marine life. Now this is where things get really interesting.

Not long ago, historians discovered two ancient maps that reveal the Antarctic region without ice. One of the maps, that of Piri Reis, who was a renowned Turkish admiral from the 16th century, shows a part of Antarctica known today as the Queen Mauls Land, completely free of ice. Another map – the Oronteus Finaeucs, reveals the entire continent without ice. But how is that possible if Antarctica was discovered a century ago? And more importantly, why is there no ice?

Let’s take a look at the first document. The Piri Reis map was discovered in 1929, it was drawn on the skin of a gazelle, and analysis revealed that it is a genuine document drawn by Piri Reis’ subordinates in 1513. The admiral was an esteemed officer in the Navy who enjoyed the privilege of having access to great places of knowledge. Due to its Turkish origins, the place with the most resources was the Imperial Library of Constantinople. 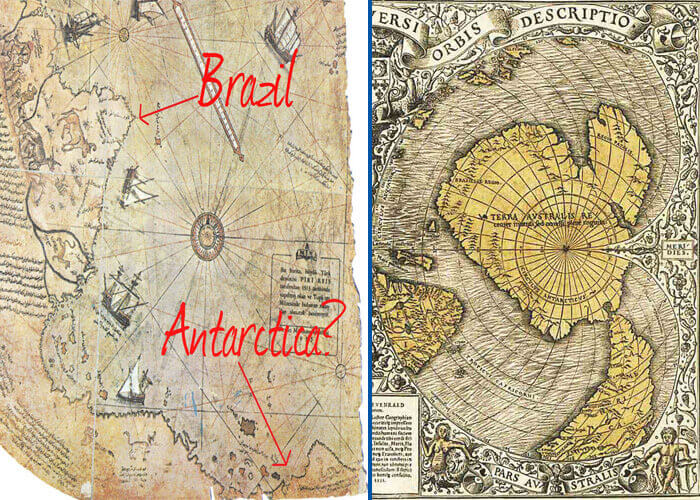 On the left, part of Piri Reis; on the right part of the Oronteus Finaeus map, both showing the Antarctic region free of ice

The map is believed to have been compiled from other maps from different sources, some of them existing as early as the 4th century BC, or even earlier. While some other maps were drawn by contemporary sailors to the admiral, others were collected from the Royal Library of Alexandria, the most important library of antiquity. Apparently, after its destruction, copies of documents along with some original letters were taken to other important cultural centers, including Constantinople.

Knowledge remained locked until 1204, the year of the fourth crusade. When the Venetians besieged Constantinople, an abundance of tomes and maps were torn from the Turkish imperial library and fell into the hands of the European sailors. Although most of the maps were of the Mediterranean and the Black Sea, there were others from the Americas, the Arctic, and the Antarctic Oceans. So how can this be possible if the Antarctic land mass was discovered only in the 20th century?

Dr. Charles Hapgood, in his book “Maps of the Ancient Kings of the Sea”, offers a relevant insight on these -contradictory facts:

It appears that accurate information has been passed from person to person. It seems that the letters must have originated with an unknown people and that they were transferred, perhaps by the Minoans and the Phoenicians, who were, for a thousand years and more, the best sailors in the ancient world. We have proof that they were collected and studied in the great library of Alexandria and the compilations of them were made by the geographers who worked there …

It is clear that the ancient travelers traveled from pole to pole. Incredible as it may seem, the evidence indicates that some ancient people explored Antarctica when its shores were free of ice. It is also clear that they had a navigational instrument to accurately determine lengths that was far superior to anything possessed by peoples of ancient, medieval, or modern times until the second half of the eighteenth century. “

Although official science implies that the ice shelf that extends over Antarctica is millions of years old, the Piri Reis map completely discredits this hypothesis, since the northern part of the continent had been mapped before there was covered ice. This means two things: either humans with advanced graphics capabilities existed millions of years ago, which arises out of the question according to our currently accepted paradigm, or the map had been drawn tens of thousands of years ago, by humans using advanced mapping techniques. 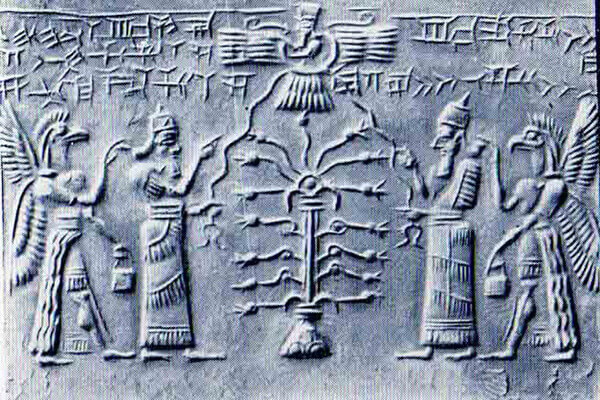 Considering the second hypothesis, it also contradicts what modern science says about the first known civilization: the Sumerians. As far as is known, they quickly appeared in an area of ​​the central part of the East about 6,000 years ago, but they did not possess nautical or maritime skills. Likewise, they speak of the ancient people they treated as “gods” because of their unusual abilities, and refer to them as the Anunnaki.

If we look at more recent studies of Antarctica, we can see that the last ice-free period in the area is estimated to have ended approximately 6,000 years ago, which means that some ancient sailors must have mapped the region beforehand. With this in mind, it appears that as early as 4,000 BC, possibly even earlier, complex maps of the world existed.

These documents were later collected for safekeeping within the Library of Alexandria, also indicating that ancient Egyptian scholars were studying them. With the destruction of this renowned cultural center, only a handful of tomes escaped from the city, and knowledge is now scattered and scarce. Fortunately, the pieces of the puzzle are back together again.