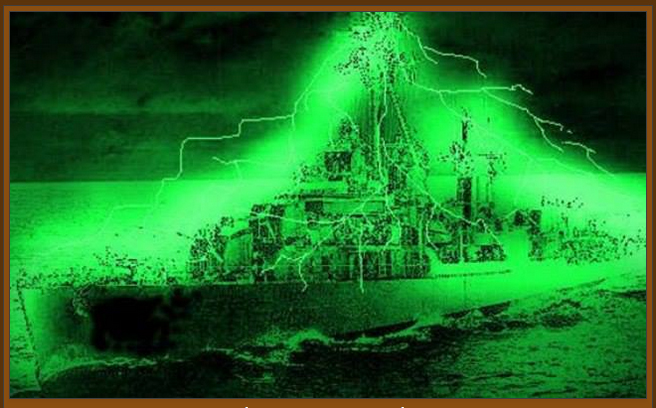 The Philadelphia Experiment is one of the most grotesque military urban legends of all time – and endured as an infamous World War II conspiracy theory. But is there any truth to that? Let’s take a look.

According to legend, on October 28, 1943, the USS Eldridge, an escort of Cannon-class destroyers, was conducting top-secret experiments designed to conquer ocean dominance against Axis forces. The rumor was that the government was creating a technology that would make ships invisible to enemy radar and, back at the Philadelphia shipyard, it was time to test it.

Witnesses claim that a mysterious blue-green glow surrounded the ship’s hull as its generators spun, and suddenly the Eldridge disappeared. The ship was spotted at the Norfolk Naval Shipyard in Virginia, before disappearing again and reappearing in Philadelphia.

The legend claims that classified military documents reported that the Eldridge crew was affected by the events in disturbing ways. Some went crazy. Others developed mysterious diseases. Others are said to have been merged with the ship; still alive, but with members sealed to the metal.

This will give you nightmares. Which is really a compelling reason why Eldridge’s story has gained so much momentum.

In a 1994 article for the Journal of Scientific Exploration, Jacques F. Vallee theorized that deep images are essential to plant a farce in the minds of the masses and the educated public.

But before we explain what really happened that day, let’s talk about the man behind the myth: Carl M. Allen, who would adopt the pseudonym Carlos Miguel Allende. In 1956, Allende sent a series of letters to Morris K. Jessup, author of the book “The Case for the UFO“, In which he argued that unidentified flying objects deserve further study.

Allende said he saw Eldridge disappear from the Philadelphia shipyard and further insisted that the United States military had conducted what he called the Philadelphia Experiment – and were trying to cover it up.

Jessup was then contacted by the Navy Naval Research Office, which had received a package containing Jessup’s book with notes alleging that extraterrestrial technology allowed the US government to make discoveries in unified field theory.

This is one of the strangest details. The notes were designed to look like they were written by three different authors – one maybe extraterrestrial?

According to Valle’s article for the Journal of Scientific Exploration, Jessup became obsessed with Allende’s revelations, and the troubled researcher would take his own life in 1959. Only in 1980 would evidence of Allende’s forgery be made available.

Inexplicably, two ONR officers had 127 copies of the annotated text printed and distributed in private by the military contractor Varo Manufacturing, giving wings to Allende’s story long after Jessup’s death.

So, what really happened on board the USS Eldridge that day?

According to Edward Dudgeon, who served in the US Navy aboard the USS Engstrom, which was moored at the Philadelphia shipyard while Eldridge was there, the two ships had classified devices on board. They were not invisibility cloaks or teleportation units designed by aliens, but they shuffled the magnetic signatures of ships using the demagnetization technique, which provided protection against magnetic torpedoes on board submarines.

The website How Stuff Works suggested that the ‘green glow’ reported by witnesses that day could be explained by an electrical storm or the St. Elmo fire which, in addition to being an American film starring the Brat Pack, is a climatic phenomenon in which plasma is created in a strong electric field, emitting an intense glow, almost like fire.

Finally, inland canals linked Norfolk to Philadelphia, allowing a ship to travel between the two in a few hours.

The USS Eldridge would be transferred to Greece in 1951 and sold for scrap in the 1990s, but Allende’s hoax would continue to live in our lasting nightmares forever.

In this article:Philadelphia Experiment, USS Eldridge