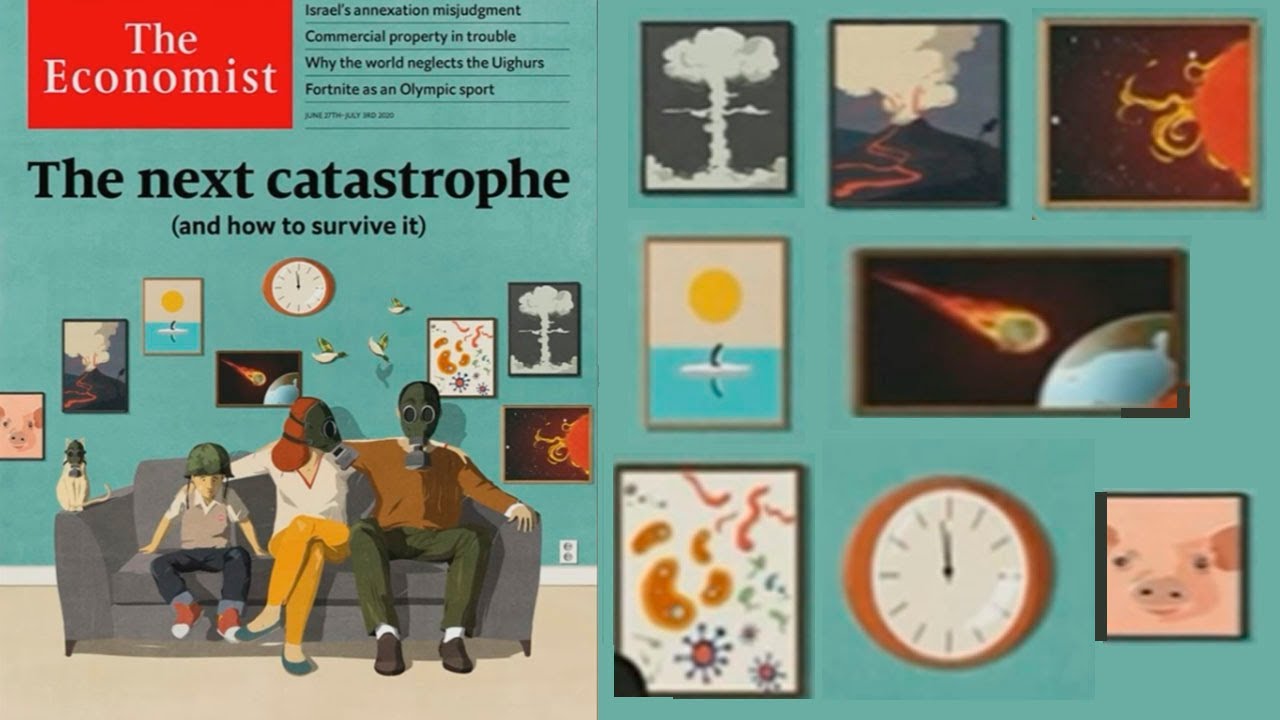 Another haunting cover of The Economist theorizing that we would have to prepare for an upcoming catastrophe, has gone viral on social media

In a world ruled by elites, no one knows if what happens is chance or is it coldly planned. Now, the new cover of The Economist, the Rothschilds magazine, has raised much controversy because it shows, possibly, the next catastrophe.

“The Next Catastrophe¨, that is the title of the new magazine cover The Economist, which is owned by one of the most powerful families of humanity and an active member of the elite that wants to establish the New world order, the Rothschild.

The Economist It is quite controversial since, being a magazine of monthly publication, every December publishes a special cover in which he mentions what will happen next year.

For example, last year’s cover, in its rather subtle messages, mentioned the current health crisis.

The cover shows several alarming elements, most of them illustrated in some pictures about a family sitting in an armchair, quite casual … but with parents carrying gas mask and the boy carrying Military helmet.

Many people would take this illustration as one more, without giving it much importance. However, experts, analyzing the work, have realized that it could really be a notice of the next catastrophes that lie ahead.

Should we prepare for a period of very sinister events that will endanger humanity? It seems that the pandemic we are experiencing is only the prelude to what will come next ..

The cover of The Economist is based on survivalism, or also known as “Preppers,” a movement of people actively preparing to survive a possible chaotic future.

They are prepared, either for disturbances of the political and social order, or for natural disasters, whether at the local, regional, national, or even the world level.

Preppers are generally the first to prepare for these events, whether it’s storing food and water, building shelters, or having medical and self-defense training.

We are now going to look at the disturbing details on the cover, starting with a family sitting on a sofa wearing gas masks and a helmet.

They appear to be preparing for a catastrophe or other bad event. But the most disturbing thing is the pictures on the wall ..

Some of these pictures coincide with the Illuminati letters and other covers of The Economist magazine, so it could be “predictive programming” messages.

We start with a picture of a pig that refers to the swine flu epidemic, which may reappear again.

But have you wondered what would happen if the Earth’s poles melted but not because of global warming, but because of another inexplicable phenomenon like an inversion of magnetic poles?

If this were to happen, sea levels would rise, leaving large cities underwater near the coast. 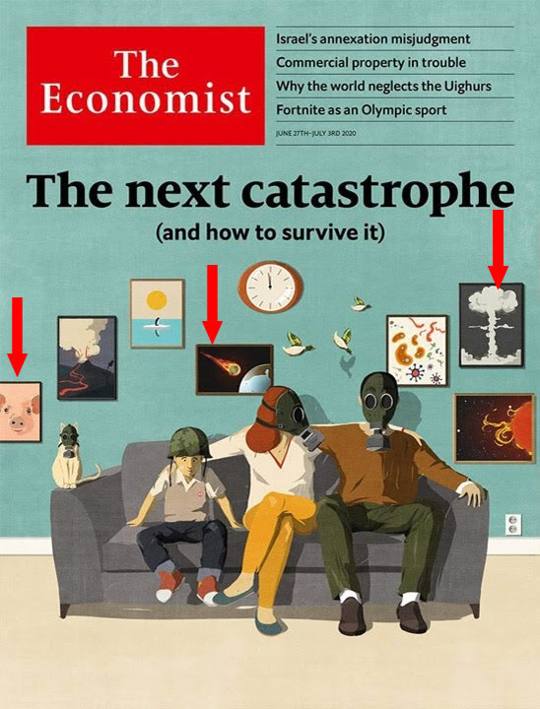 The following chart is one of the most disturbing and catastrophic since we see an asteroid on an impact course towards Earth.

Beside in the following table we see a species of migratory birds, but one of them is falling and this could refer to an epidemic transmitted by birds such as bird flu.

There is also a table with the image of bacteria and other microorganisms, which makes us think that this will not be the last pandemic that humanity will experience.

Another disturbing picture is where we see the image of a nuclear mushroom. It will be another sinister predictive programming message.

The last frame where we see the image of the Sun throwing a huge flare, is what is interpreted as a solar storm.

A large solar storm could disrupt telecommunications or even damage some satellites … and in the worst case scenario could cause massive blackouts.

We finish with the most important and symbolic detail of this cover, and it is the clock that is in the center of all the paintings.

The clock strikes a few seconds to be 12 o’clock, or maybe midnight, and this makes a clear reference to the Clock of the Apocalypse or Clock of Doom.

The clock is a metaphorical representation to show the time we have left on the planet.

If we see the image, which marks a few seconds to midnight, and we put it together with some pictures with sinister images, we would say that its cover is announcing that humanity is getting closer to its end.

This analysis on the cover of The Economist is a reading that must be taken as a possible hypothesis, something that can happen, but it may also not happen.

We must be attentive to events.

In this article:Rothschilds, The Economist