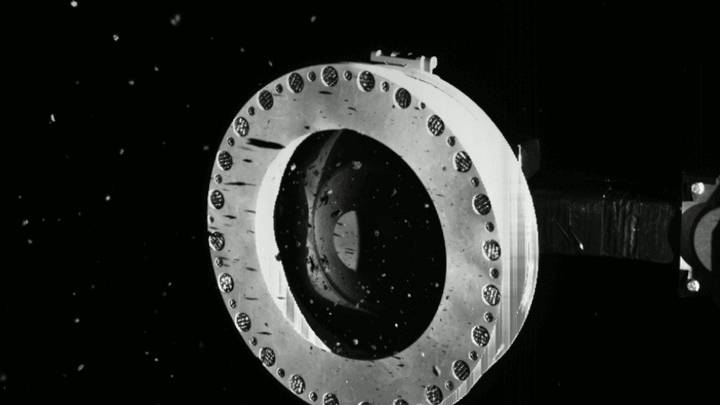 Two days after touching the surface of the asteroid Bennu, the OSIRIS-REx mission team received images confirming that the spacecraft has collected enough material to meet one of its main objectives: to acquire a sample of at least 60 grams.

The probe imaged the harvesting arm head (TAGSAM) as it moved in different positions. Reviewing these images, the OSIRIS-REx team noticed that the header was filled with particles from the asteroid, spilling some of them out. Scientists suspect this is because the smaller rocks passed through small crevices in the device as a result of the capture of larger rocks.

“Bennu continues to amaze us with his science,” said Thomas Zurbuchen, NASA associate administrator at the agency’s headquarters in Washington. “And even though we may have moved too fast to store the sample, that is not a problem. We are excited that we still managed to collect a rich sample that will inspire scientists for decades after this historic moment. “

The images also show that any movement of the spacecraft and the TAGSAM instrument could lead to further loss of the collected material. This is why, in order to preserve it, the mission team has decided to advance the Sample Mass Measurement activity and minimize any acceleration of the spacecraft.

Thereafter, researchers will focus on storing the material in the Sample Return Capsule (SRC), where any loose rocks or particles will be secured for return to Earth.

“We are working on maintaining our own success here, and my job is to bring in as large a Bennu sample as possible,” said Danta Lauretta, principal investigator at the University of Arizona in Tucson, who leads the scientific team, observations and processing. mission data. “Loss of mass is a concern for me, so I am rushing the team to safeguard the valuable sample as quickly as possible.”

The TAGSAM head fulfilled its objective in optimal conditions. The analysis available so far show that it correctly leveled to the Bennu surface upon contact and when the nitrogen cartridges were fired to displace material. It also penetrated several inches into the surface of the asteroid.

OSIRIS-REx remains in good health, and the mission team is in the last stages of storing the collected samples.