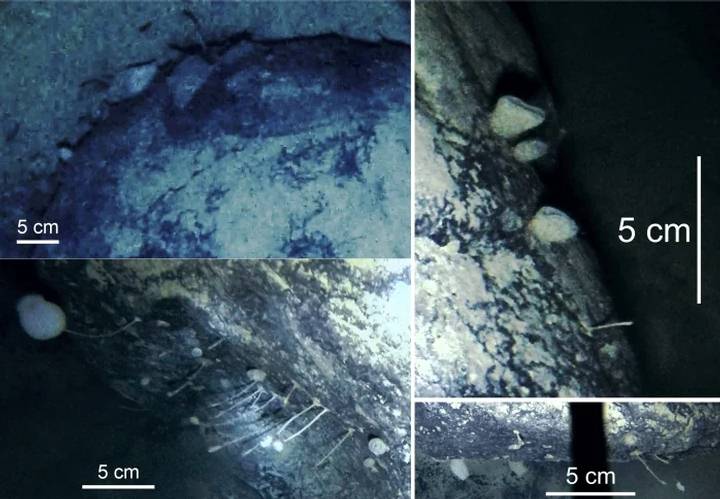 A group of international researchers have discovered mysterious life forms found under the thick Antarctic ice during a core drilling of the Filchner Ronne glacier.

After drilling 900 meters of the glacier shelf to reach the ocean floor, scientists were amazed to find a rock covered with strange sponge-like creatures of unknown species.

“This discovery is one of those lucky incidents that shows how amazing life is and how it can fit anywhere,” said Dr Huw Griffiths of the British Antarctic Survey.

The ice shelves of Antarctica are like permanent floating rafts connected to the main mass and can be quite huge. In total, they make up more than 1.5 million square kilometers, about one third of the Antarctic continental shelf.

The scientist also noted that this discovery now raises a whole host of questions:

We know that there is life under the ice, usually in the form of small creatures such as fish, jellyfish, worms, and crustaceans. Aquatic animals that feed on filters such as sponges were very unexpected here, so far away from regions where photosynthesis is possible.

As we know, there are organisms that can harvest nutrients from glacial melt or chemicals from methane infiltration, but in the case of these strange creatures we are more than 1,500 km upstream from the nearest source of photosynthesis, scientists calculate, which cannot not to wonder how life in such conditions is possible.

Much of life on Earth depends on the Sun for its survival. Photosynthesis is at the base of the food chain, with organisms such as plants and algae using sunlight to make sugars and other organisms that can feed themselves

But in the dark depths where sunlight fails to reach, some life forms use a different strategy. Around the thermal vents of the ocean that expel heat and volcanic chemicals, bacteria rely on chemosynthesis to make sugars, which form the basis of a similar food chain. A chemosynthetic ecosystem was also discovered in a cave in Romania.

“To answer our questions we should find a way to get closer to these beings and their environment,” Griffiths concluded, “This means that as polar scientists, we should find new and innovative ways to study them and answer all the new questions we have. “.

Advertisement. Scroll to continue reading.
In this article:Antarctica, life forms