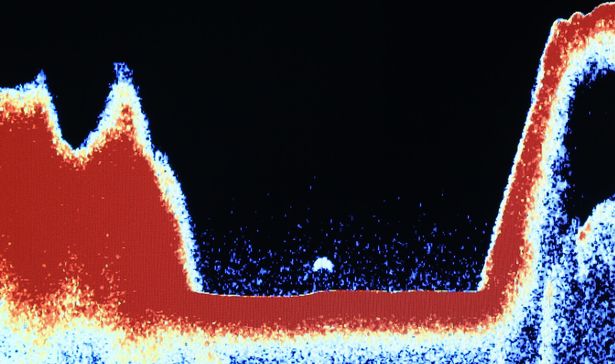 Sonar image of the boat. Was the light spot just above the bottom of the lake the legendary animal? (Photo: Peter Jolly)

The “most compelling” evidence of the existence of Nessie has been recorded more than 500ft below the surface of the loch.

Monster hunters are astounded by the clarity of the image of an object, estimated to be 33ft long – although an expert said it may just be a shoal of fish.

The sonar image was captured by the director of Cruise Loch Ness, Ronald Mackenzie, while commanding a catamaran on Wednesday afternoon (9/30).

It was a bit of a dreich day and we only had 12 passengers. We were at our halfway point off Invermoriston, where we turn around. The water is 189m (620ft) deep there. The passengers were quite excited because we had just spotted a sea eagle, but then I saw on the sonar something more eye-catching

I’ve been on the loch since I was 16 years old and I have never seen anything like it.

We have real state-of-the-art sonar on the new boat. It doesn’t lie. It captures what’s there.

I believe there’s something in the loch that nobody knows what it is, be it a big eel or a sturgeon or a big fish of some sort – or even Nessie.

But it is certainly a fascinating and interesting contact and certainly adds to the debate about Nessie.

Nessie expert Steve Feltham, who set a world record for the longest watch looking for the Loch Ness Monster, said the image of Ronald’s sonar was the “most convincing” evidence of the existence of the legendary creature he has ever seen.

It is extremely exciting. I have known Ronald Mackenzie for 30 years. He’s a Highland lad who does not seek publicity and shies away from the fanciful Nessie theories.

I definitely think Nessie is an animal. I think we are getting closer and closer to finding the answer.

Among the most famous sightings is a photograph taken in 1934 by Colonel Robert Kenneth Wilson, which was later exposed as a farce.

Advertisement. Scroll to continue reading.
In this article:Loch Ness Monster,Nessie