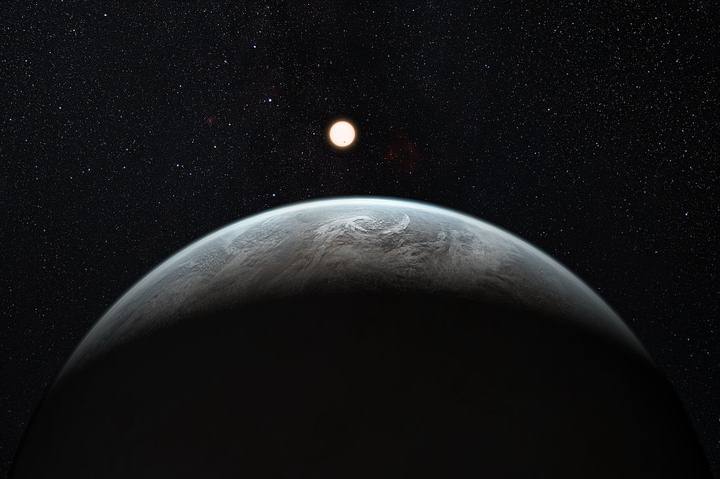 A newly discovered 12-light-year star system includes three worlds in the size range between Earth and Neptune. One of them is located in the star’s “habitable zone”, where the heat of its host allows liquid water to be present.

GJ 1061d is approximately 1.7 times the “weight” or mass of Earth, and is probably a rocky world. The energy it receives from its star is between what Earth and Mars receive from our Sun. In other words, the planet falls into the “habitable zone” of its star. If it is rocky and has a proper atmosphere, GJ 1061d could have water on its surface.

The planet is the outermost of the three discovered in this system, and yet it orbits its star every 12 or 13 days. Because its red dwarf star is so small and cold, the near orbit means a potentially temperate planet. Furthermore, the star appears to be older and less active than young red dwarfs, making the planet less prone to harmful stellar eruptions. Observations, for now, have not determined the composition of GJ 1061d or whether it has an atmosphere.

The discovery of this new planetary system, whose other two planets also surpass Earth, is part of an unusual scientific campaign called the “Red Dots” collaboration – a reference to Carl Sagan and his labeling of our planet as “a pale blue dot. »-. Red dots are red dwarf stars within the 16 light-year radius of Earth. The focus, which focuses on one star at a time, has produced other exciting discoveries, including that of a potentially rocky planet orbiting our closest stellar neighbor, Proxima Centauri.

Three exoplanets were found orbiting a star just 12 light-years away. One, a Super-Earth 1.7 times the mass of our home planet?, is in the habitable zone of its star? (meaning liquid water * could * exist on the surface).https://t.co/C4LDYQuiQc pic.twitter.com/nZ7BH9ZgBw

About 15 exoplanet systems are known in 16 light years, most of them around red dwarfs, also called M-type stars. Together, these systems have 33 planets; more than half includes more than one planet. And the new system resembles more distant ones, including the seven Earth-sized planets that orbit around a red dwarf TRAPPIST-1, about 40 light-years away.

An international team led by Stefan Dreizler from the University of Gottingen in Germany discovered the new system using the HARPS spectrograph at the 3.6-meter European Southern Observatory telescope in La Silla, Chile. The instrument measures “oscillations” in the motion of a star caused by the gravitational pulls of orbiting planets, a method of detecting exoplanets known as “radial velocity.”

In this article:exoplanets, habitable zone