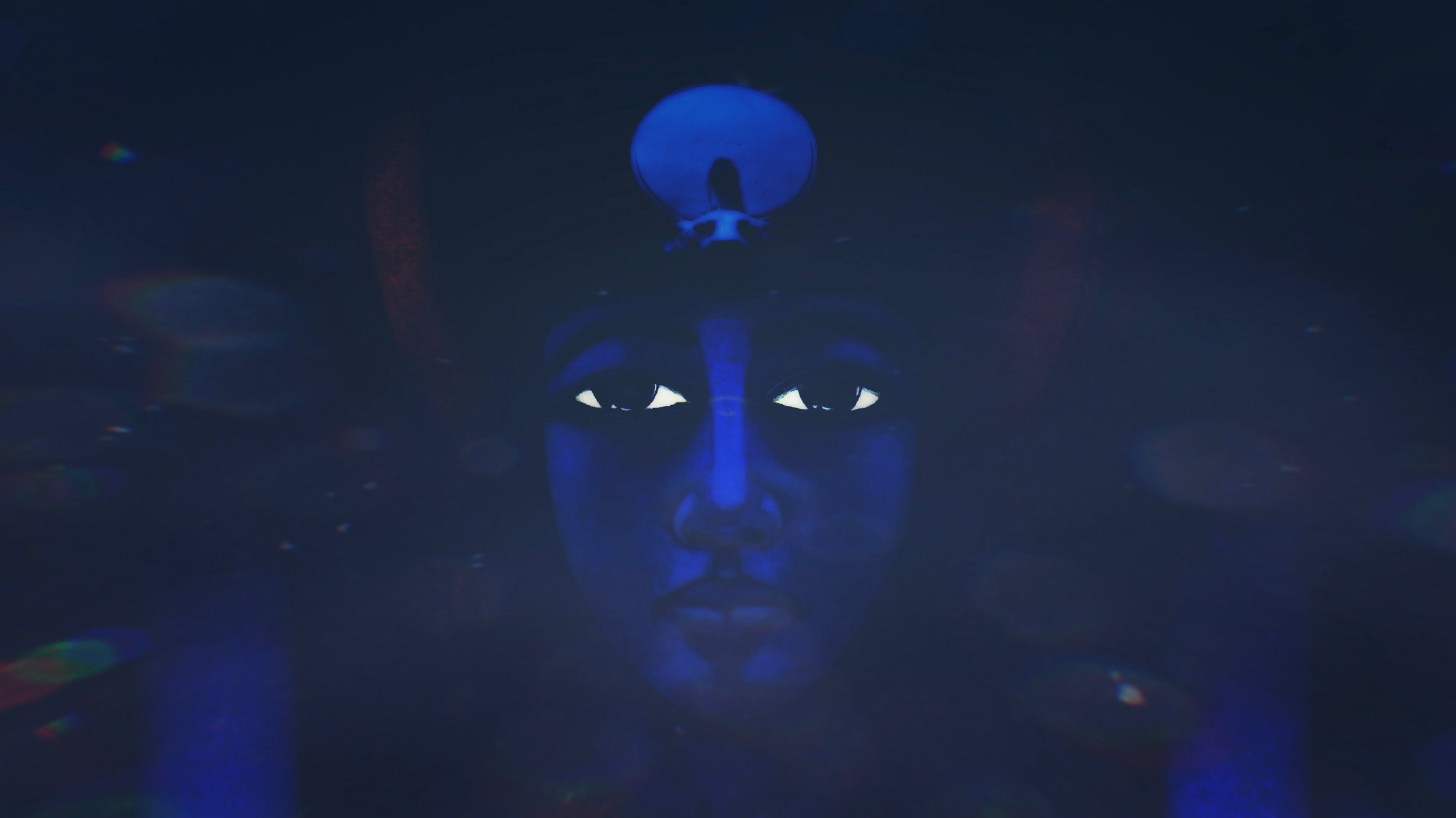 Even if the dark and infinite ocean of non-physical reality escapes any attempt at mapping, the Qliphoth offer esoteric landmarks to those who venture beyond the far side of the Moon. This system of progressive self-initiation of the senestral way helps to structure an unknown territory by introducing a form of rationality understandable by ordinary consciousness in an occult domain. Each Qliphoth represents a state of consciousness involving the development of certain faculties through trial, study and contemplation of symbols. Mastering the energies present in each sphere opens access to the next qliphah. If we refer to Kabbalah to position the Qliphoth on the nocturnal face of the tree of life, domain of the Sephiroth, the tree of death is accessible by Daath, the hidden Sephira making the link between the two aspects of the same reality. Although the night / day, good / bad, life / death duality is not ultimately relevant, it is advisable to start by exploring the tree of life before venturing into the shadow of this knowledge.

Indeed, choosing this perilous and lonely path is not a decision to be taken lightly. Motivated by the desire for dazzling advances and the acquisition of supranormal powers, the follower cannot ignore the dangers that await him. He consciously enters the centers of power, taking the risk of losing what he has, what he is, what he knows. It is a sacrifice where madness, depression, hopelessness and perdition are potentially present. Silence and darkness reign inviting to the sobriety of emotions and thoughts. Only the one whose inner strength has become unshakable by a preliminary asceticism is able to face the monsters lurking in the shadows who will try to devour him. The terror of annihilation is its guardian, the test that warns and discourages those who are not ready.

Being ready to lose everything is the sine qua non for overcoming obstacles as a master, capable of transforming them into powerful levers towards forbidden knowledge. Equanimity, discrimination, unshakable self-confidence and fortitude are the weapons that will allow the initiate to continue, to go ever further without being destroyed but recreated for the birth of the living demonic god. The promises of the Qliphoth attract those who desire full realization by integrating light and shadow beyond the primary dualities. Wisdom advises to follow a prudent progression without skipping the stages under the excess effect of an immature pride. The keen senses and intuition detect and analyze anomalies, hallucinatory aberrations of a twilight consciousness in order to realize a potential beyond imagination. The 11 levels of the Qliphoth way:

By way of information and in order to give a more “concrete” idea of ​​what the initiation of the Qliphoth may involve, you will find below the translation of a text describing the different spheres. These descriptions are not absolute but rather fall under the subjectivity of the author (Asenath Mason) and in no way constitute a dogmatic truth. What everyone finds on their journey is personal and can take different cultural and symbolic forms. Maybe these descriptions of Qliphoth will speak to you, maybe not. Make your own way, find out for yourself what is hidden in each sphere of power. Only the interior transformation process is universal, but remains in the elusive, eluding definitions and classifications.

LILITH (Queen of the Night): The door to the Unknown. Here, the initiate comes into contact with his first guides and allies on the way, and consciousness opens up to the realm of Night. Lucifer’s ascending flame is lit and Lilith approaches to guide the initiate through the paths of the dark path. The divinity of the first Qliphah is Naamah, dominating the material world. She can grant the magician the desired material goods but she is endowed with a despotic character which is difficult to manage. Naamah is Lilith’s demonic sister, both of whom often introduce themselves as the first guide to entering the dark worlds.

GAMALIEL (The obscene): The astral sphere of dreams. Here the initiate explores the mysteries of witchcraft and sexual alchemy. The goddess of the Moon reigns there, she introduces the follower to the secrets of moon magic. In the sphere of Gamaliel, all forbidden fantasies, suppressed lust and shameful dreams are brought to light. The Goddess of Gamaliel is Lilith, appearing as a sensual woman with a snake body. It seduces the magician and guides him in the dark aspects of our instincts. She is the Queen of Demons, and reigns with Lucifer over the entire Qliphothic Tree.

SAMAËL (The poison of God): The Alchemical poison is ingested by the magician who succumbs to its toxic effects. His conscience must overcome trials in which madness, doubt and disbelief assail him. It is about contact with the personal, deadly Shadow, it teaches the initiate the mysteries of Death and the flight of the soul. Here in the Adramelech Desert, the faith and devotion of the follower are tested. Adramelech is the sovereign entity of this Qliphah under the appearance of a half-peacock, half-human creature. It gives the magician pride and magnificence, which, however, are only illusory and contribute to the initiatory test.

A’ARAB ZARAG (The Crow of Dispersion): The Mysteries of Venus and Luciferian Magic. The initiate takes the path of mystical eroticism and war trials. Aab Zaraq breeds destruction, often through war, conflict and death. The God reigning over this Qliphah is Baal, the god of war. He has the appearance of a warrior with a horned mask and armed with a spear. He instructs the magician in the art of invisibility and teaches him about Luciferian freedom. His wife and reigning Goddess of this sphere is the Dark Venus, initiator of new mysteries of sexual magic.

THAGIRION (The Opponent): The illumination of the dark side by the light of the Black Sun. The initiate experiences the union of god and the beast in him, and realizes the idea of ​​embodied divinity. Thagirion is the sphere of the Daemon, the image of the personal god, and of the beast 666, continually striving to dominate human instincts. The reigning God of this Qliphah is Belphégor, The God of Death. Belphégor was originally a Moabite deity named Baal-Peor, half male-solar and female-lunar. During magic works, it manifests itself in its bestial form but also in the appearance of a young woman. It gives the magician imagination and wealth.

GOLACHAB (The Burning One): The Apocalypse. The initiate becomes the Fire of Destruction. Through SM sexual practices, the initiate is tested in suffering and lust. It is the Qliphah of fire – comprising both the creative flame and the destructive breath. The Qliphah is the domain of Asmodeus, who appears as a winged and flaming god. It represents both the power of fire and the power of sexuality. The incubi and succubi of this sphere are the strongest and most violent of the whole Qliphotic Tree.

GHA’AGSHEBLAH (The executioner): The other side of mystical eroticism. The initiate goes through trials of war and love and becomes the executioner. The energies of this Qliphah bring life or destruction. They destroy the substance of Creation at the base of the foundation of the Universe. The reigning deity of this sphere is Astaroth, the foul-smelling spirit, riding the Dragon and holding a snake in his hand. He sees beyond the past, the present and the future. He is also the patron of the Liberal Arts.

DAATH: The Vision of the Abyss and the encounter with Chorozon, the gatekeeper.

SATARIEL (The illusionist): The opening of the Eye of Lucifer. The initiate faces trials where surrealism and absurdity dominate, and learns to detect the Truth in what is hidden. Appearances are deceptive. Lucifuge presides over this Qliphah, the one who avoids the light. Its description appears in many medieval and Renaissance grimoires on hierarchies of demons. It reveals hidden treasures but can also make the magician lose his mind.

GHAGIEL (The destroyer): The lightning of the Luciferian star. The initiate breaks Divine Law and prepares to enter Lucifer’s Throne Room. It is the Qliphah of rebellion and the shaking of the foundations of the world. The dominant entity in this sphere is Belzebuth, the Lord of the Flies.

THAUMIEL (The Twins of God): Fulfillment of the Serpent’s Promise. The initiate becomes God incarnate. This Qliphah is double with two reigning entities: Satan and Moloch. Thaumiel is the antithesis of Kether. The original meaning of Satan is the Opponent. In the Old Testament he was the accuser and he tried and tested the faith of humans by misleading them. Moloch was a cannaanite deity whose worship involved the sacrifice of children by fire.