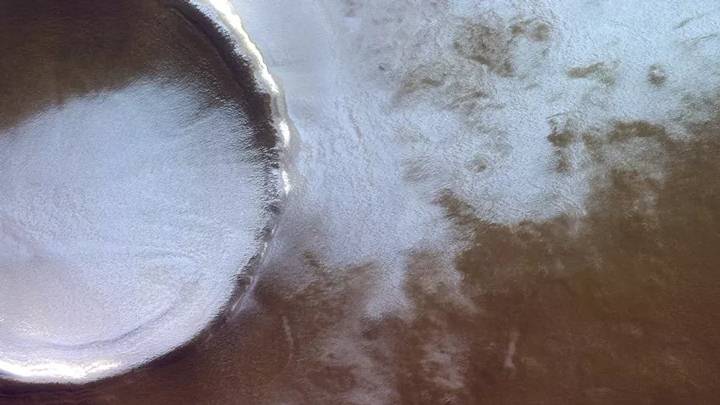 The European Space Agency (ESA) has shared incredible images of a huge ice-filled Martian crater that, in a few decades, could facilitate access to water for settlers who settle on the red planet.

The Korolev crater is 82 kilometers in diameter and at least 2 kilometers deep. It is located in the northern lowlands of Mars, south of an extensive patch of dune-ridden terrain surrounding the polar cap (known as Olympia Undae).

Now, ESA has produced the video that we share in this news from high-resolution images taken by the Mars Express probe, managing to reproduce a three-dimensional flyby over the region where the crater is located.

What is seen in the images is not snow. Korolev is filled with water ice year-round because the soil it sits on is located two kilometers below its edge enclosing a 1.8 kilometer-thick domed reservoir making it a non-polar ice reservoir.

But … how is it possible for the ice to remain stable in the crater? Doesn’t water ice sublimate to Mars having such a fine atmosphere? This has an explanation.

Like dry ice here on Earth, water ice on Mars usually goes from solid to gaseous state at low atmospheric pressure (Mars is about 8 millibars, while on Earth at sea level it is on average 1013.25 millibars). 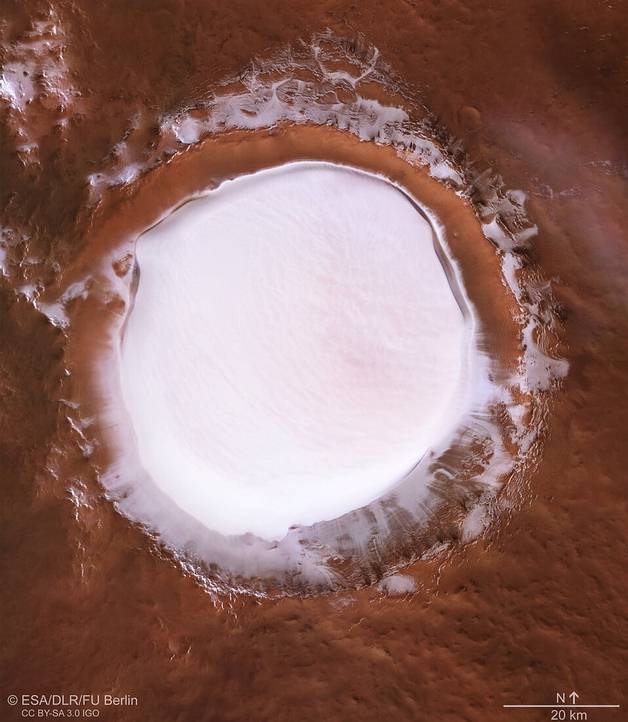 But temperature can influence ice stability as well. The water ice remains stable in the Korolev crater because the deepest part of this depression acts as a natural cold trap.

ESA scientists explain that the air on the ice cools and is therefore heavier with the surrounding air, and since air is a poor conductor of heat, the mound with water ice is effectively protected from heat and of sublimation.

The name of this particular crater may sound familiar. It was named after the head of Soviet rocket engineers and spacecraft designer Sergey Pavlovich Korolev, who is considered the father of Russian space technology for his work on the Russian R7 intercontinental rocket, as well as being the forerunner of modern rockets. Soyuz and his contribution to man’s first space flight in 1961.