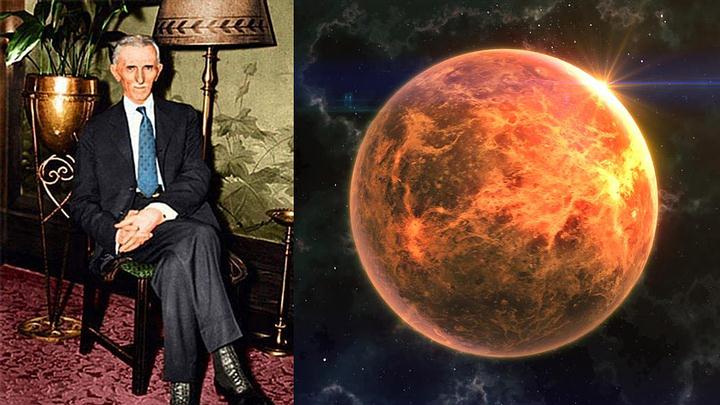 The text suggests that the genius was of Venusian origin and had contacts with the “men from space.”

Some have even claimed that their inventions were between 300 and 1,000 years ahead of their time. In fact, it predicted much of the technologies we enjoy today, such as the internet and smartphones. He also developed many others that never transcended paper or experimental, such as global wireless electricity and a mysterious and deadly ray of death.

All of this led some people to think that Nikola Tesla was so unique that he couldn’t be from this planet. This was the case of a woman named Margaret Storm, a mystic and esotericist whose fascination with the inventor led her to write a book about him, entitled The Return of the Dove, which mixes facts about the inventor with wild speculations, including that Tesla was from the planet Venus.

Cover and back cover of the book

Incredibly, part of this is quoted at the beginning of a declassified FBI document of more than 60 pages, mainly focused on how the feds handled themselves after Tesla’s death to confiscate your belongings and prevent them from falling into the hands of agents of enemy nations. There, among several informants or interviewees, who knew or had studied the Serbian-Croatian inventor, Storm appears and a section called Interplanetary Sessions Newsletter.

“People from space have visited Tesla engineers many times, and they have told us that Tesla was a Venusian, brought to this planet as a baby, in 1856, and left with Mr. and Mrs. Tesla in a remote place. mountainous province of what is now Yugoslavia, ”the document reads.

It is also claimed that much of the data spilled in Storm’s book is “based on transcripts received through a radio device invented by Tesla in 1938 for interplanetary communication.”

Tesla and the aliens

The proclamation sounds totally outlandish … and it is! Well even though recently it was discovered that there could be organic life in the atmosphere of Venus, life as we know it is impossible on the infernal surface of this neighboring planet, much less a civilization — at least in our reality or dimension, it could be proposed.

However, it should be noted that, in the year 1900, Tesla himself did document having heard what he thought was a message from an extraterrestrial civilization while experimenting at his Colorado Springs station. More information about the case and what exactly the inventor said about his alleged contact can be read in the following article: Did Nikola Tesla receive extraterrestrial signals?

Of course, and beyond the above, it is still striking that the FBI has included the “Tesla-Venus connection” in an official document, just as if it were in the film Men in Black where several celebrities are recognized as coming from another planet.

The complete and declassified FBI document can be read HERE.

In this article:Nikola Tesla, Venus