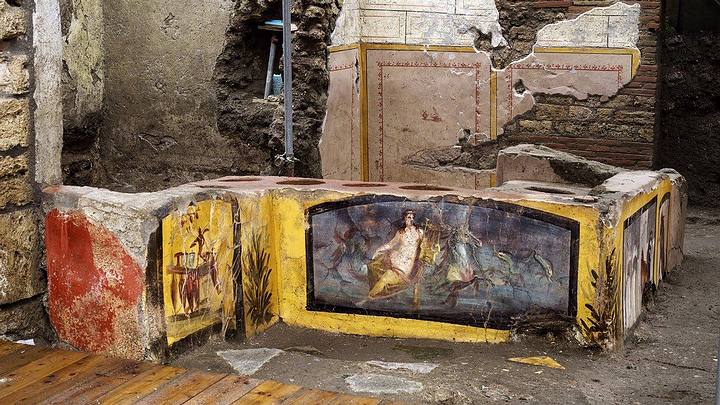 A 2,000-year-old fast food stall unearthed from the ashes of Pompeii has given researchers new clues about the eating habits of ancient Romans.

The ornate bar, decorated with polychrome patterns and frozen by volcanic ash, was partially exhumed last year, but archaeologists expanded work on the site to reveal it in all its glory.

Pompeii was buried in a sea of ​​boiling lava when the volcano on nearby Mount Vesuvius erupted in AD 79, killing between 2,000 and 15,000 people. Even today, archaeologists continue to make discoveries there.

He thermopoly –from Greek term for ‘hot’ and pennyroyal to ‘sell’ – it was located at what was a busy intersection, and was the Roman-era equivalent of a fast food stand. 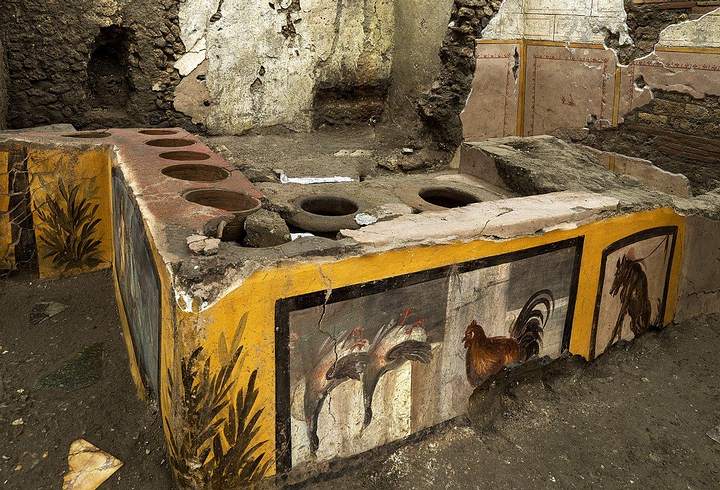 The team found fragments of duck bones, as well as the remains of pigs, goats, fish and snails in clay pots. Some of the ingredients had been cooked together like a paella of the time. At the bottom of a jar, ground beans were found, which were used to modify the taste of the wine.

“It was covered in lava and when we removed it, a very strong wine aroma appeared. The smell was so strong that we could perceive it through our masks,” Teresa Virtuoso said, an archaeologist who supervises the team of scientists excavating at the site.

Amphoras, a water tower and a fountain were found at the site along with human remains, including those of a man believed to be in his 50s and near a child’s bed.

“It is possible that someone, perhaps the oldest man, was left behind and died during the first phase of the eruption,” Massimo Osanna said, general director of the Pompeii Archaeological Park.

“The remains of another person were also found, who could be an opportunistic thief or someone fleeing the eruption and who was surprised by the burning fumes just when he had his hand on the lid of the pot that he had just opened,” added the expert. 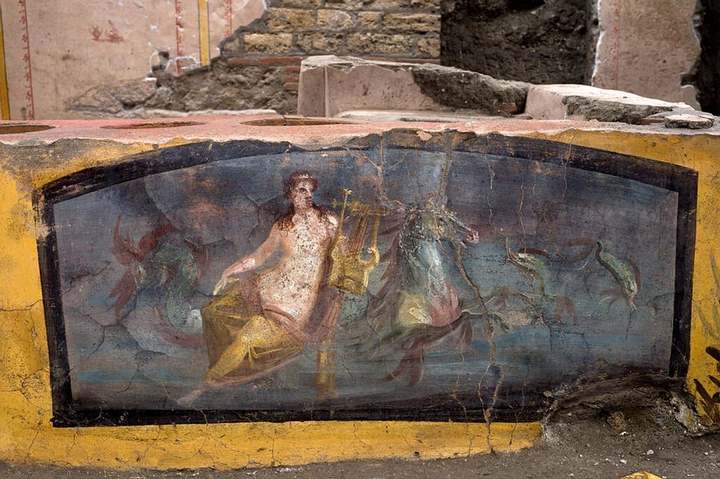 In the later stage of their work, archaeologists uncovered a number of still life scenes, including depictions of animals believed to be on the menu, particularly mallards and a rooster, to be served with wine or hot drinks.

Earlier a fresco had been unearthed with an image of a Nereid nymph riding a seahorse and gladiators in combat.

As a next step, the scientists hope to be able to carry out a more detailed analysis to determine the dishes at the pace that the inhabitants of this city consumed.

“We will analyze the contents of the vessels to determine the ingredients and better understand what kind of foods they were,” Chiara Corbino said, another archaeologist involved in the Pompeii excavation.

The thermopoly was very popular in the Roman world. Pompeii alone was around 80.

The huge site that stretches over 44 hectares (110 acres) is what remains of one of the richest cities of the Roman Empire. Layers of ash buried many buildings and objects in an almost pristine state, including the huddled corpses of the victims.

Pompeii is the second most visited site in Italy after the Colosseum in Rome and last year it attracted some 4 million tourists.

In this article:Fast Food, Pompeii