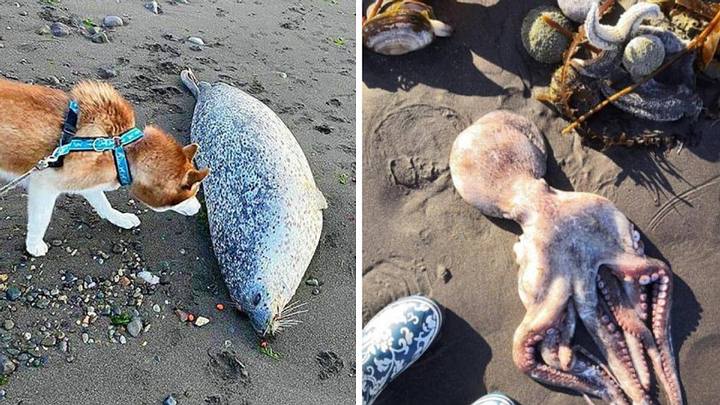 A huge slick in the Kamchatka Sea has already killed seals, octopuses, sea urchins and other marine animals. Also, some surfers report having temporary vision loss, vomiting, coughing fits and a sore throat when they came into contact with this unknown substance.

“An ecological disaster has occurred in Kamchatka, in the Khalaktyr beach area – a tourist spot known in particular to surfers – and Avacha Bay, in the Pacific Ocean,” said Greenpeace, who already asked the authorities from the Russian peninsula “an immediate investigation into the causes of pollution.”

‘We only know that it has a very destructive effect on wildlife. Wherever this stain passes, there is a massive death of marine fauna. The animals appear on the shore and are then washed away by the tides. We went past Khalaktyr beach. There is practically nothing on the beach itself or in the nearest bays. We have seen the remains of this stain from time to time. On some rare occasions, there are groups of dead sea urchins, crabs… ”, said Vasily Yablokov, Head of the NGO’s climate project in Russia.

According to Yablokov’s estimates, the patch of contamination has reached several kilometers in length, but over time it becomes smaller. The ecologist said that in the sanctuary itself, where there are many colonies of marine mammals, they are already preparing for the arrival of contamination in the water area and they intend to closely monitor the situation with the use of surveillance systems for video and with the participation of divers.

Surfers who frequent the beach say that the tides have changed color and become unhealthy: people in contact with the water have experienced different symptoms ranging from blurred vision to sore throat, vomiting, weakness or high fever, which could indicate phenol poisoning.

Faced with the photos of animal corpses on the beach, shared thousands of times on the Internet, local authorities initially published images of a sunny beach on Instagram, stating that “the color of the water is normal, the smell of the air is normal, it is perfectly clean.

However, this was quickly challenged, forcing the governor of Kamchatka, Vladimir Solodov, to visit the area and threaten to fire those who had concealed the seriousness of the situation. After this, several samples of the polluted waters and animals were taken to be sent to Moscow.

Russian Environment Minister Dmitri Kobilkin, for his part, said in an interview with the public channel Russia 24, that no excessive level of oil or chemicals has been found in the samples analyzed so far. He pointed to the possibility that it is a phenomenon “of natural origin”.

“After storms, there is an increase in the toxicity of micro-organisms in that area, which causes changes in (the content of) oxygen, causing this type of phenomena”, which he says are very common in the Japanese islands of the region.

Experts cited in particular by the newspaper Novaia Gazette and the public press agency RIA Novosti, however, they handle the hypothesis of an extremely toxic rocket fuel leak, the heptyl, which would come from one of the many military installations in Kamchatka.

This is fucking shit! Just fuck the whole coast in corpses, people are poisoned, life is dying, nothing stops, and we don’t say anything about it. What, Kamchatka poisoned itself, like Navalny, right? https://t.co/luOmURhVUT

The Russian territory, with old facilities dating from the Soviet era, frequently suffers industrial ecological disasters, such as the leakage of 21,000 tons of fuel that contaminated the waterways in the Arctic, at the end of May, after the collapse of a deposit of a thermal power plant of the Norilsk Nickel group.

Kamchatka is one of the most remote regions of Russia. Until the fall of the Soviet Union it was closed, because it hosted numerous military installations.

In this article:Kamchatka Sea, Toxic Stain