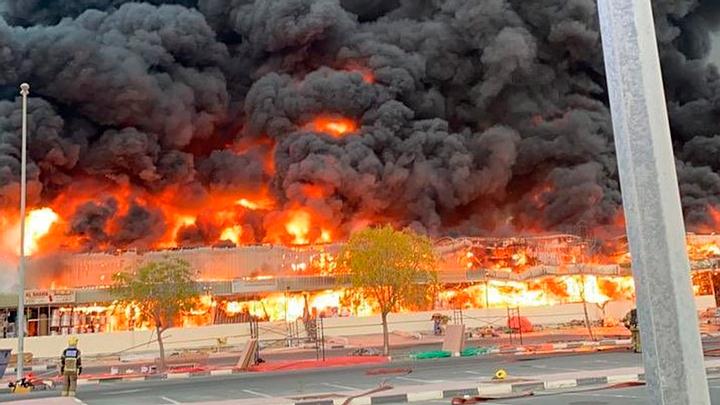 After the huge explosion in Lebanon on the 4th of August, a large fire has started in a market in the city of Ajman, in the United Arab Emirates (UAE). The origin of the incident and if there are victims is still unknown.

A hospital and a food market were evacuated on Wednesday after a large fire broke out in the industrial zone of Ajman, a city in the United Arab Emirates.

Workers from nearby stores described how the flames invaded the area and firefighters arrived quickly to try to douse the flames, which sent thick plumes of smoke into the sky.

The cause of the fire or whether someone was injured or the extent of the damage caused is still unknown. However, it is believed that the fire may have started in the souq Iranian Ajman, an open-air market that houses dozens of traders and is a popular attraction that draws visitors from all over the Emirates. The site has been closed for several months due to COVID-19 security measures.

DEVELOPING: Massive fire breaks out at market in Ajman, United Arab Emirates; no word yet on cause or injuries

Rajab Elsawi, the owner of a butcher in front of the souq, told the newspaper The National who alerted emergency services after seeing a thick layer of black smoke rise and removed the barriers to allow firefighters to enter.

Another worker said several people tried to put out the fire with the extinguishers in their stores but were unable to contain the rapidly growing flames.

According to local media, the Ajman Civil Defense department said the fire had been controlled around 9pm.

In this article:fire, United Arab Emirates