The newly confirmed exoplanet is 1,800 light-years away, in the constellation Cygnus (the Swan), and orbits three stars.

This artist’s rendering shows the planet KOI-5Ab transiting through the face of a Sun-like star, part of a triple star system located 1,800 light-years away, in the constellation Cygnus. Credit: Caltech / R. Huido (IPAC)

Shortly after NASA’s Kepler mission began operations in 2009, the space telescope detected what was thought to be a planet about half the size of Saturn in a multiple star system. KOI-5Ab was only the second candidate planet found by the mission, and as exciting as it was at the time, it was eventually shelved as Kepler accumulated more and more planet discoveries.

By the end of the spacecraft’s operations in 2018, Kepler had discovered a whopping 2,394 exoplanets – or planets orbiting stars beyond our sun – and 2,366 additional exoplanet candidates that would still need confirmation.

“KOI-5Ab was abandoned because it was complicated and we had thousands of candidates,” said David Ciardi, chief scientist at NASA’s Institute for Exoplanetary Sciences. “There were easier elections, and we were learning something new from Kepler every day, so this candidate was completely sidelined.”

Now, after a long search that lasted many years and with the assistance of many telescopes, Ciardi said that he has “raised KOI-5Ab from the dead.” Thanks to new observations from NASA’s second planet-search mission, the Transiting Exoplanet Reconnaissance Satellite, or TESS, and a series of ground-based telescopes, all the evidence surrounding the KOI-5Ab could finally be unraveled and prove its existence.

Most likely the new confirmed exoplanet is a gas giant like Jupiter or Saturn in our solar system.

Given its size, KOI-5Ab is unusual in that it orbits a star in a system with two other companions, circling in a plane that is not aligned with at least one of the hosts. The arrangement casts doubt on how each member of this system formed from the same swirling clouds of gas and dust. 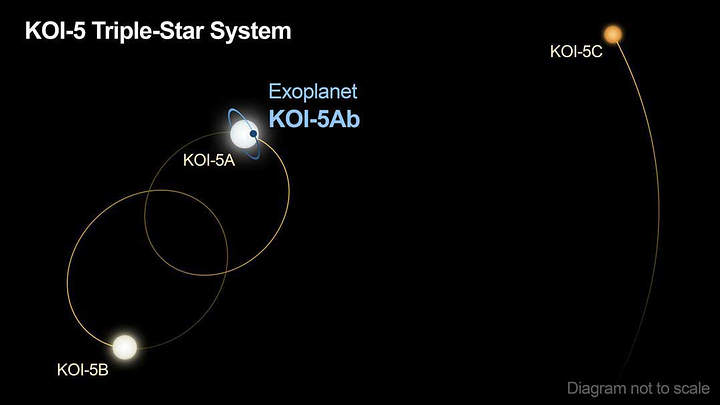 KOI-5Ab orbits star A, which has a relatively close companion, star B. Star A and star B orbit each other every 30 years. A third gravitationally bound star, Star C, orbits stars A and B every 400 years

But this is not the first evidence of planets in double and triple star systems. A surprising case is that of the GW Orionis triple star system, in which a planet-forming disk has broken into distinct, misaligned rings, where planets may be forming.

Notably, despite hundreds of discoveries of planets in multiple star systems, far fewer worlds have been observed than in single star systems. This could be due to an observing bias (single-star planets are easier to detect), or because planet formation is less common in multi-star systems.

“This research emphasizes the importance of NASA’s entire fleet of space telescopes and their synergy with ground systems,” said Jessie Dotson, a Kepler space telescope project scientist at NASA’s Ames Research Center in Silicon Valley. “Discoveries like this can open the way for more.”