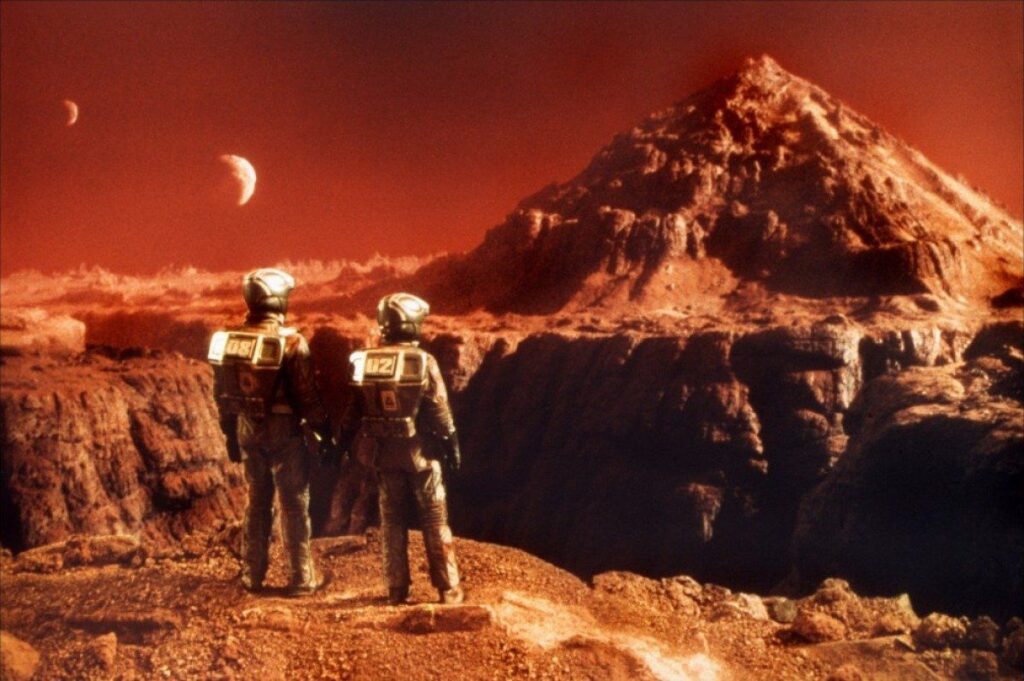 Let’s imagine for a moment that scientists were able to send people to Mars. But what will they do there? Mars is not the most friendly planet for life. There is at least no oxygen, not to mention cosmic radiation, from which the atmosphere protects us on Earth, but it does not exist on the Red Planet. In fact, the question of how representatives of our species can survive in the hostile environment of distant worlds has long been of concern to scientists.

So the researchers believe that you can survive in the harsh Martian environment deep in the Martian soil. Since scientists recently obtained evidence that Mars is a seismically active planet, there is a network of large underground tunnels that were formed as a result of thousands of years of volcanic activity.

These tunnels, or, as they are called, lava tubes, remained after the fast-flowing lava burned through the Martian soil.

Lava tubes: cavities in the lava flows, elongated as corridors. These channels are obtained by uneven cooling of the lava that flows from the slopes of the volcano.

Space, as you know, is not a suitable place for life forms like Homo Sapiens. The harsh space environment, penetrated by radiation, in the literal sense of the word destroys all living things. Even tardigrades are microscopic animals that can survive in the most extreme conditions. In 2007, researchers discovered that these “water bears” resist the short-term effects of extremely low temperatures, cosmic radiation, and an almost complete vacuum. Okay, this is amazing. But even they cannot be in outer space for a long time. What can we say about you and me?

And yet we have created technologies with which you can enter Earth’s orbit and even your moon. In theory, we are close to interplanetary flights, and I think it is no secret that the governments of many countries plan to send a man to Mars. But what do we have in practice?

Our regular readers are probably aware that the biggest problem for future space travelers is space radiation. In a previous article, I said that the results of scientific research have shown that prolonged exposure to space has a devastating effect on the brain.

It turns out that if the flight to the Red Planet takes around 7 months, then people with severe brain damage can land on Mars, and most likely won’t even understand where they are. We note that today there is no solution to this problem.

So, given all the available knowledge about Mars, the only more or less safe habitat for humans are underground tunnels or lava tubes. According to astrophysicist Antonio Paris and his team, who have been researching and evaluating the safety of Martian lava pipes, protecting future settlers in deep underground tunnels can significantly reduce exposure to dangerous cosmic radiation. Furthermore, the researchers are convinced that the Hellas Planitius “Greek Plain” is the best place to land.

The fact is that less cosmic and solar radiation falls on this part of Mars than on most of the rest of the planet’s surface. According to Antonio Paris, protecting astronauts in deep lava tubes can further reduce their impact, thereby ensuring colonists’ survival. But how do you measure the level of radiation in the lava tubes on Mars?

This is where knowledge of lava tubes on Earth comes in handy: by measuring their levels of external and internal radiation, Paris had a general idea of ​​whether the structure of lava tubes can reduce the effects of cosmic radiation. The results of the study are published in the journal of the Washington Academy of Sciences.

“Lava tubes can aid in the study of Martian geology and geomorphology, and can also help find any evidence of the development of microbial life in the early stages of the natural history of Mars,” Paris writes on her twitter.

So the lava tubes may very well become our new home on another planet. Okay, the prospect sounds more or less. Surely everyone remembers horror movies about cave dwellers and other problems that may occur there (for example, in the movie “Descent” or the TV series “LOST”), but given the fact that they may not Let’s have another option: life in the lava tubes – This is far from the worst thing that awaits a person on other planets.

In this article:lava tubes, Mars