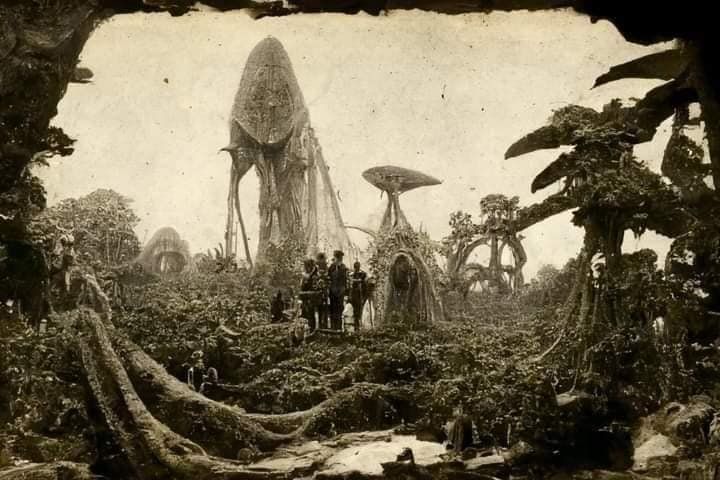 Traveler and explorer Alfred Middleton amazed the whole world with pictures taken on expeditions. Unfortunately, the archive with photographs after death during a visit to one of the exotic countries was in a careless state, and now it is extremely difficult to understand exactly where in the world certain pictures were taken.

Alfred Middleton devoted his entire life to traveling through the Amazon, Africa and Asia. His goal was to discover the heir of Atlantis – the ancient city of Dawleetoo. It is difficult to say whether the researcher discovered it or not, but numerous photographs are more like fantastic.

On them you can see the ancient ruins of a bizarre shape, representatives of strange tribes, now extinct animals, and all this was captured at the end of the 19th century.

According to the traveler himself, he managed to buy a map at one of the African markets from a local shaman. It depicted 3 locations of cities of ancient civilizations. One of them was in Southeast Asia, the other in Central Africa and the largest in the forests of the Amazon. Middleton showed this map to almost a dozen fellow researchers, so the artifact was quite real.

It is assumed that Alfred, together with like-minded people, went to the Amazon (according to another version, to the island of Sumatra), where he was captured, after which no one saw the traveler again. Colleagues believe that they could not find Doulit, because otherwise there would be no point in the last expedition.

Middleton kept a diary, where he briefly noted details important to himself. At the end of the 20th century, the traveler’s manuscripts were bought by a private collector, and lost during the Second World War.

All that remains of one of the world’s most ambitious explorers is a pile of photographs of very strange objects: inexplicable structures, representatives of unknown tribes and unusual animals. The landscapes in the pictures seem so fantastic that all attempts by academic scientists to establish the location of the shooting were unsuccessful. Later, due to their own impotence, they were proclaimed a production.

But what if the oldest ruins of cities actually exist and one of the few who managed to find them was just the same Alfred Middleton? In this case, you have to admit that the jungle hides many more surprises from people.

In our opinion, the sensational photographs of the traveler prove once again that much of what is put into our heads from the school bench is far from a complete picture of the world. At least this applies to history and previous civilizations.

Advertisement. Scroll to continue reading.
In this article:Alfred Middleton, Amazon