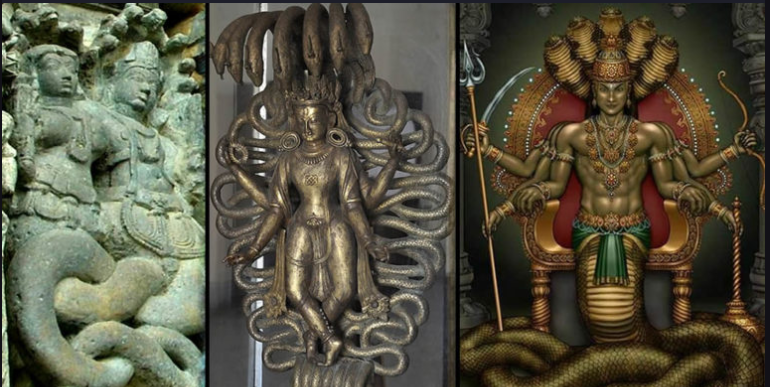 Dragons, according to the accounts of many of the ancient cultures scattered around the world, are reptilian gods living in large underground cities. Ancient civilizations like Patala and Bhogavati claim to be related to these great ones underground cities inhabited by naga, snake-like creatures, often regarded as gods.

Their references are in India, but there are also similar stories in South America where they are known as Amaru in Peru, Quetzalcóatl in Mexico, or Djedhi in Egypt, ect ..

All these cultures welcomed the “serpents of wisdom” and were worshiped as gods or prophets.

Naga according to mythology

Mythology describes these beings as a race, usually female , hybrid between human and snake ; The torso usually looks like a person, but the underside is that of a snake.

They are described with a seductive look as their eyes are large and bright.

According to the different narratives, both of civilizations that of different eras , these beings were demigods, or minor mythological deities who were distinguished by their greatness intelligence and wisdom . They were considered masters of patience.

According to some legends, they become dangerous when humans harm the environment or disrespect them. Given their affinity with water, the entrances to their underground cities are said to be hidden at the bottom of deep wells, lakes and rivers.

According to Indian popular belief, there is an entrance to the Patala located at the Sheshan Well. The place is visited by many tourists, even if the natives of the area maintain the utmost respect for it. This is due to the ancient myths that Nagas are a highly advanced race, having access to ancient technology. In Vedic literature they are often related to Vimana, flying machines from India. He is also attributed “magic stones” and a third Eye.

The third Eye, according to esotericism, it is the gateway to the inner realms and spaces of the higher consciousness. In New Age spirituality, the third eye symbolizes a state of enlightenment or the evocation of mental images that have spiritual significance.

In a Cambodian legend, the naga were a race of reptiles that possessed a large kingdom in the Pacific Ocean region; one of their princesses married the first king of Ancient Cambodia, giving rise to the Cambodian people. For this reason Cambodians still consider themselves heirs of the naga.

The seven headed nagas represented in Cambodian temples, such as at Angkor Wat, represent the seven races of the naga society, which have a mythical, or symbolic, association with the seven colors of the rainbow. Additionally, Cambodian nagas possess numerological symbolisms for other numbers on their heads: odd numbers representing masculine energy, infinity, eternity, and immortality; even numbers for femininity, physicality, mortality, temporariness, and the Earth.

Legends similar to Cambodian ones are widespread among the Adivasis of South India and the aborigines of Australia; in these versions, the nagas inhabited a large continent in the Pacific Ocean (now known as the lost continent of Mu), which then sank and whose remains now form Indonesia and Australia.

These nagas would have developed an extremely advanced underground and submarine civilization with superhuman powers. Hindu mythology is one of the most complex of ancient times and demonstrates the existence of reptile-like deities that we can find in many other cultures.

In this article:Nagas, Reptilian Deities